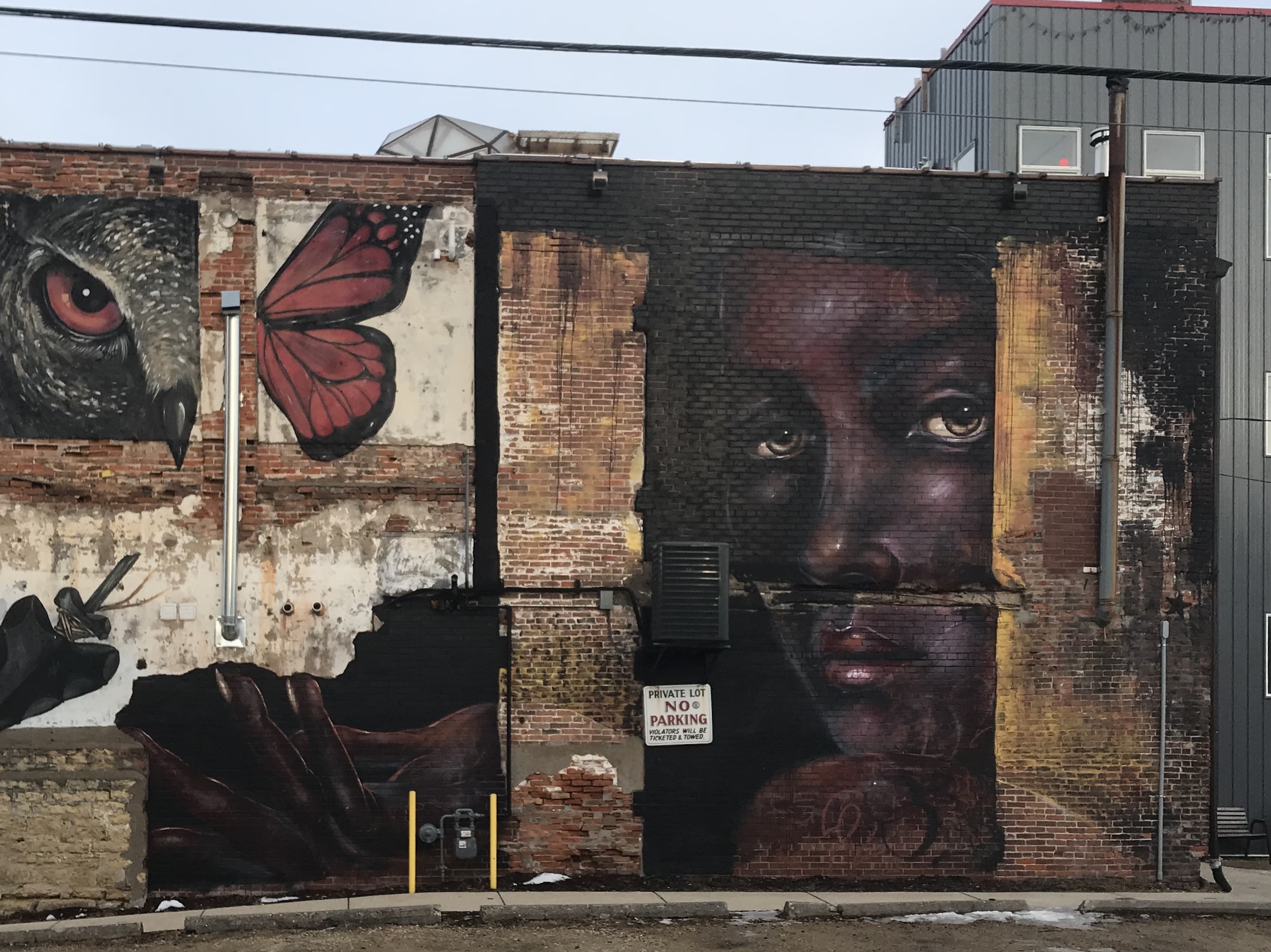 Brooklyn sits in a wheelchair, behind a fold-out table, to welcome volunteers to the Bernie Sanders Dubuque field office the weekend before the Iowa Caucuses, the first leg of the Democratic nomination process. Buses and caravans of volunteers are coming in from all over the Midwest — Wisconsin, Minnesota, Illinois, Indiana and even Ohio — and not one of them gets by without Brooklyn kindly asking “sign in please, don’t forget to sign in.”

Brooklyn came to Dubuque in October after being seriously injured in a home invasion, landing at a Dubuque shelter not far from where we are standing. After a few interactions with Bernie folks, Brooklyn found her way into the campaign office. It was the efforts of staffers to reach out on a human level, Brooklyn said, and the kindness they showed that influenced her decision to stay. Since December she’s been a mainstay at the campaign headquarters.

“I was crying for about thirty minutes this morning,” Brooklyn said Thursday morning, over the phone. “I don’t want all our hard work to be for nothing.”

In a startling move, Democratic National Committee Chairman Tom Perez called for a site-by-site recount Thursday afternoon, just as a Bernie Sanders victory became apparent. This after an unprecedented three-day delay in reporting caucus results. The announcement, which comes as about three percent of the voting data has yet to be released, casts even more doubt on an already dubious process.

Late Monday night, after nearly two percent of results came in, the Iowa Democratic Party announced that no more results would be reported that night in order to verify results. In the wake of this announcement, with more than 98 percent of the results yet to be tallied, Pete Buttigieg declared victory. Tuesday night, the Iowa Democrats released 64 percent of the vote, which showed Sanders with a slight edge in votes and tied with Buttigieg in pledged delegates. However, pundits focused coverage on Pete’s two percent lead in State Delegate Equivalents (SDEs).

One of the measures used to calculate pledged delegates, SDEs are, in and of themselves, meaningless.

Even as late as Wednesday morning, the New York Times predicted, based on SDEs, that a Pete victory was all but guaranteed. However, as more and more precinct data came in, Sanders’ vote lead widened and folks began to draw attention to reporting inconsistencies in a number of precincts, where Sanders should have received more delegates or Pete should have received less. The errors were corrected, contributing to the Sanders surge.

The New York Times was caught with its pants down on this one.

By Wednesday, the New York Times predictor had gone dead so the company could “evaluate how it is processing the results of satellite caucuses.” These gatherings, hosted in other states, or at different times, were incorporated for the first time this year to include voters that weren’t able to attend a regular caucus because of work shift or location. The Sanders campaign made a distinct effort to turn folks out to these caucuses.

At the time of Perez’s announcement, Bernie is ahead by 2,500 votes, has 547 SDEs to Pete’s 550, and both have 11 pledged delegates, the measure that ultimately determines the nominee. With about two percent yet to be reported, the Sanders campaign has claimed victory. The DNC has not said whether it will release the remaining data before a recount.

Folks on twitter noted that the staggered rollout allowed Buttigieg to grab headlines and dominate coverage, as some pundits criticized Sanders for not performing as well as expected. Many Sanders supporters were already skeptical of the process after emails and other documents verified the DNC had influenced the 2016 primary in favor of Hillary Clinton, who lost to Donald Trump in an election that featured the two most unpopular presidential candidates in U.S. history.

Just recently, there have been reports of party insiders attempting to change convention rules to allow superdelegates — often party elites who can vote for any candidate they like — to vote on the first ballot, shielding the party from the potential controversy of a second vote that overturns the will of the people. As former DNC Chair Debbie Wasserman Schultz said in 2016, “Unpledged delegates exist really to make sure that party leaders and elected officials don’t have to be in a position where they are running against grassroots activists.”

Likewise, Sanders is largely ignored by establishment news corporations, despite regularly drawing large crowds and polling well nationally, particularly with youth of color. Regardless, his campaign — which stands on a platform that prioritizes environmental, economic and racial justice — is drawing the attention of folks who feel left out of the process.

The idea that we should be able to access medical care if we are sick, go to school if we’d like and support our families without working ourselves to death, is not controversial among working people. In fact, in my experience, it has been unifying.

Brooklyn, in the campaign office.

Shawn hadn’t planned to caucus, and generally distrusts politicians, but was open and said he would look into Bernie further.

Mary committed to caucus for Bernie!

areas where results were slow to report

I was encouraged to speak with folks who’d committed to caucus for Bernie, and to bring others along. In a few cases, I was blessed to share this message of solidarity with folks who had not yet heard. I listened to people as they shared, and they listened to me. For a moment, we were present with each other.

“This is a people’s campaign, not a for-profit endeavor; this is not politics-as-usual ― this is a movement. And, as long as we remember, we will never be defeated.”

Many of us distrust the political system, and politicians, in general. And, as the Iowa Caucuses have revealed, this distrust is well-deserved. But I trust you. I trust us. And, I trust Bernie Sanders.

So, let us not lose sight of ourselves. Let us not forget ― this is about relationships. This is a people’s campaign, not a for-profit endeavor; this is not politics-as-usual ― this is a movement. And, as long as we remember this, we will never be defeated.

“When I came here, I was broken,” said Brooklyn. “You all helped put me back together.”