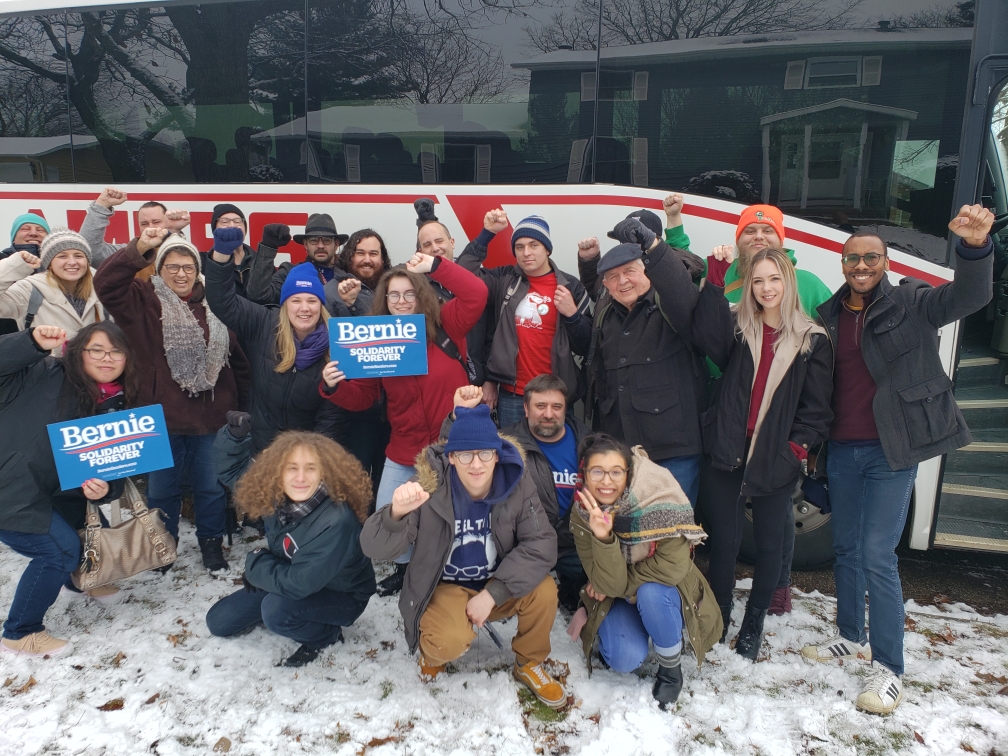 I, by default, distrust politicians. I was part of the Obama generation, proudly casting my first vote for the first Black president, whose ascent into political stardom was swift, buoyed by an optimistic message of “Yes, we can.” That message created hope among working people who had, for so long, felt overlooked. The excitement was palpable.

Perhaps that’s why it hurt so badly when he bailed out the banks, instead of us.

Obama himself wrote about the corrupting influence of money in his 2006 book The Audacity of Hope. Indeed, is there a time when American politicians have not represented powerful, monied interests first? Social, economic and racial inequality were baked into this country’s constitution, and still exist today. Ultimately, we are destroying our planet and people for profit. And, to some degree, we all have blood on our hands.

So, no, Bernie Sanders can’t save us. But I do believe this campaign might begin to right the ship.

Despite 29 years in Washington, he hasn’t bowed to the corruption that permeates our politics, resisting the temptation to benefit from his position. Of course, Sanders has his shortcomings. None of us are perfect. But he listens, and he’s been speaking up for us for a long time.

I heard Bernie’s message for the first time during the 2016 campaign. To understand how someone like myself — in their late 20s, who’d studied journalism and political science at one of the nation’s top universities and considered myself well-informed — could be kept in the dark for so long is to understand how effective our white supremacist, patriarchy-driven political machine is at silencing the voices of those who seek justice.

What resonated then and still resonates today is a very clear commitment to justice. His policy proposals — such as Medicare for All, cost-free college education and a Green New Deal — are built around that commitment in a way that speaks to our shared humanity, a rare quality amongst a generation of pull-yourself-up-by-the-bootstraps politicians.

I grew up in poverty. After my parents divorced when I was young, I watched my mother work multiple jobs to provide for our family. Today, we’re not much better off financially, the result of depressed wages and limited opportunities. At 31, I have never had health insurance as an adult. Many of my friends are saddled with tens — if not hundreds — of thousands of dollars of student debt. And, even if we act immediately, it’s likely that my 8-year-old daughter and her peers will find life increasingly difficult, given the state of our planet.

That’s why, this past Saturday, I boarded a bus from Milwaukee to Marion, Iowa, with about twenty others, to knock doors for the campaign. As a group, we listened to hundreds of potential voters who spoke about the importance of beating Donald Trump, ensuring people have family-supporting jobs, and making healthcare available to all. I shared my personal story, discussing where Bernie stands and pointing out that the campaign raised more than any other democratic candidate in the last quarter of 2019 — $34.5 million on more than 5 million individual contributions, the most ever at this point in the race.

Working people are flocking to this campaign in droves. The majority of donors are teachers, nurses, construction workers and folks who work for Walmart, Amazon, Starbucks, Target and the United States Postal Service. On Saturday, as a whole, we knocked on 35,000 doors across Iowa, with folks coming in from at least three other states to help.

And, this is how we will win: by showing up, listening to each other and sharing of ourselves.

Recently, Sanders opened up about his experience representing working and other marginalized people in a congress that is full of multi-millionaires, saying, “I have cast some lonely votes, fought some lonely fights, mounted some lonely campaigns. But I do not feel lonely now.”

So, no, Bernie can’t save us. But he is human, just like the rest of us. Personally, I wouldn’t have given my time (and nearly frozen my toes and fingers off) for any other candidate. I trust Bernie to be our standard-bearer and I believe that, together, we can begin to create a more just society, one where we share freely, move with purpose, and steward this earth well.

So, what are we waiting for?