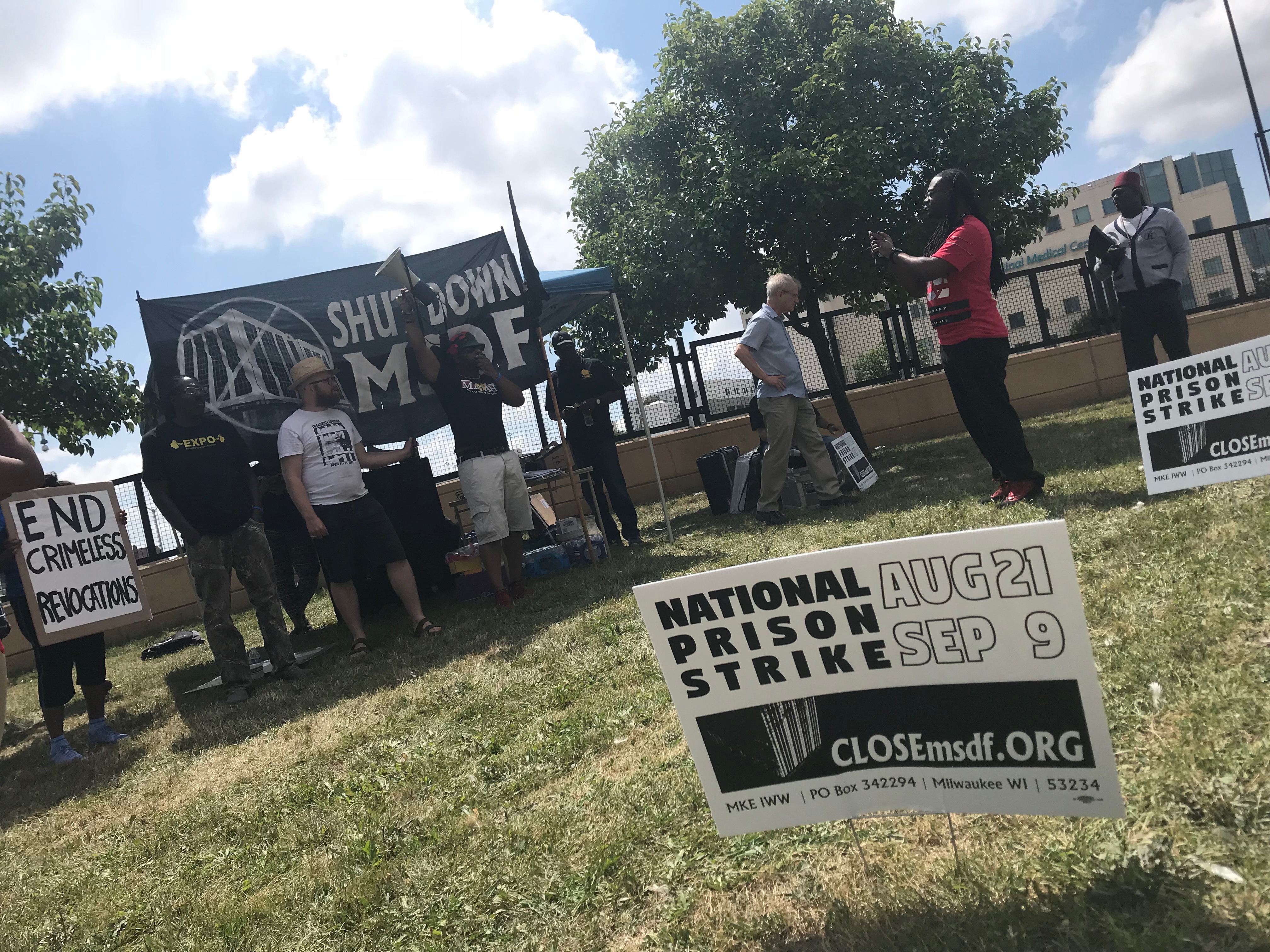 Caliph Muab-el has spent almost half of his life in prison. The 36-year-old was incarcerated from the ages of 15 to 29; ten of those years, he states, were in solitary confinement. He served time with two of his brothers and his grandfather, and says he saw fathers meet their children for the first time while incarcerated together.

“This is an urgent issue that demands urgent attention,” said Muab-el. “We’re talking about the right to live, the right to thrive …  These systems are destroying our people.”

Incarcerated people across the country are demanding fair treatment, a prevailing wage and access to rehabilitation services in the wake of an April riot at Lee Correctional Institution in South Carolina. Dubbed the deadliest incident of violence in a U.S. prison in 25 years, the riot claimed the lives of seven people and injured dozens more. Eyewitness reports state correctional staff did not intervene in the violence, or provide adequate medical aid.

The national strike, lasting until September 9, encourages prisoners to temporarily cripple prisoner-fueled labor. Locally, a campaign to close the Milwaukee Secure Detention Facility (MSFD) is standing in solidarity with those striking. The campaign, which began early last year, has called on Wisconsin Gov. Scott Walker to shutter the state-run institution.

According to Close MSDF organizer Ben Turk, if the strike is able to attract enough attention it could alter the way prisons are run and affect the profits of contractors that benefit from inmate labor. But, he says, MSDF administrators have cracked down on striking prisoners.

The Milwaukee Secure Detention Facility was founded in 2001 to house people who violated parole. Shortly after it opened, the facility broadened who it was willing to house. Although its max capacity is 1,040 people, MSDF averaged 1,077 every day in 2017. According to its website, unlike other Department of Corrections (DOC) Institutions, “MSDF accepts new offenders 24-hours-a-day.”

Activists point out that many individuals housed there have been re-arrested and detained for minor parole violations, not new crimes.

Former inmates describe inhumane conditions, including intense heat and guards intentionally denying people access to water. Reports of spotty medical and mental health treatment also permeate the contested facility. On average, one person has died in the facility every year since it opened. Ten of of those deaths, the Milwaukee Journal Sentinel reports, occurred between 2008 and 2012.

During a short stay at MSDF in 2004, Schultz said he and cellmates were not able to wash, drink or flush the toilet for two days, after correctional officers turned off the water.

“We’re here [and] we’re concerned about this,” he said. “It’s not going away, it’s getting worse.”

Caliph Muab-el speaks at a recent Close MSDF rally. Muab-el, who was incarcerated for 15 years, is working with groups in Milwaukee, Madison and Chicago to combat incarceration, which he says is part of a system that preys on communities of color. (Photo by Jabril Faraj)

Close MSDF has consistently engaged in public action to call attention to the facility. The campaign, which is led by former MSDF detainees, has provided a platform for former prisoners to call for reform. At a recent demonstration in downtown Milwaukee, formerly incarcerated people and their family members gathered to do just that.

Damene Garrison’s significant other, Lucas, has been inside MSDF for over 252 days. Since arriving, he’s been in and out largely due to what Garrison feels is a broken parole system. In one case, Lucas was re-arrested just 16 hours after being released, under dubious circumstances. Another time, he was detained after his GPS monitor malfunctioned.

This cycle of repeated detention has cost Lucas two jobs. According to Garrison, the mounting stress ultimately contributed to a failed suicide attempt, which landed him in the hospital.

Walker said, guards were largely inattentive to the needs of prisoners, and the complaint system provided to inmates was ineffective. According to Walker, inmates would verbally lash out at guards, or even flood cells just to be noticed. “If you act a fool you get your meds,” he said. “You have to be disruptive to get help.”

“Trauma keeps you where you are,” noted Muab-el. “Why would you choose a better way when this is what you’re faced with?”

Demonstrators stressed that, though little official information is available about conditions in these facilities and prison officials repeatedly deny allegations of abuse, reports from prisoners are consistent and credible.

“We came out here show love for the people locked up in there,” said Elijah Helm, a member of Bad Religion, a trio of young rappers who performed at the MSDF protest. “We stand with them.”

And, despite the lack of action from Governor Walker, activists remain motivated. Joseph Ellwanger, a local pastor and interfaith leader, encouraged organizers to push forward, noting that all eight candidates in the Democratic primary for governor supported incarceration reform. Democratic nominee Tony Evers, who will take on Walker in November, views incarceration as a racial justice issue. According to Evers’ website, he would end crimeless revocation, mandatory minimums and solitary confinement, and invest in alternatives, including diversion programs, restorative justice strategies and living-wage employment.

Jabril Faraj contributed to this story