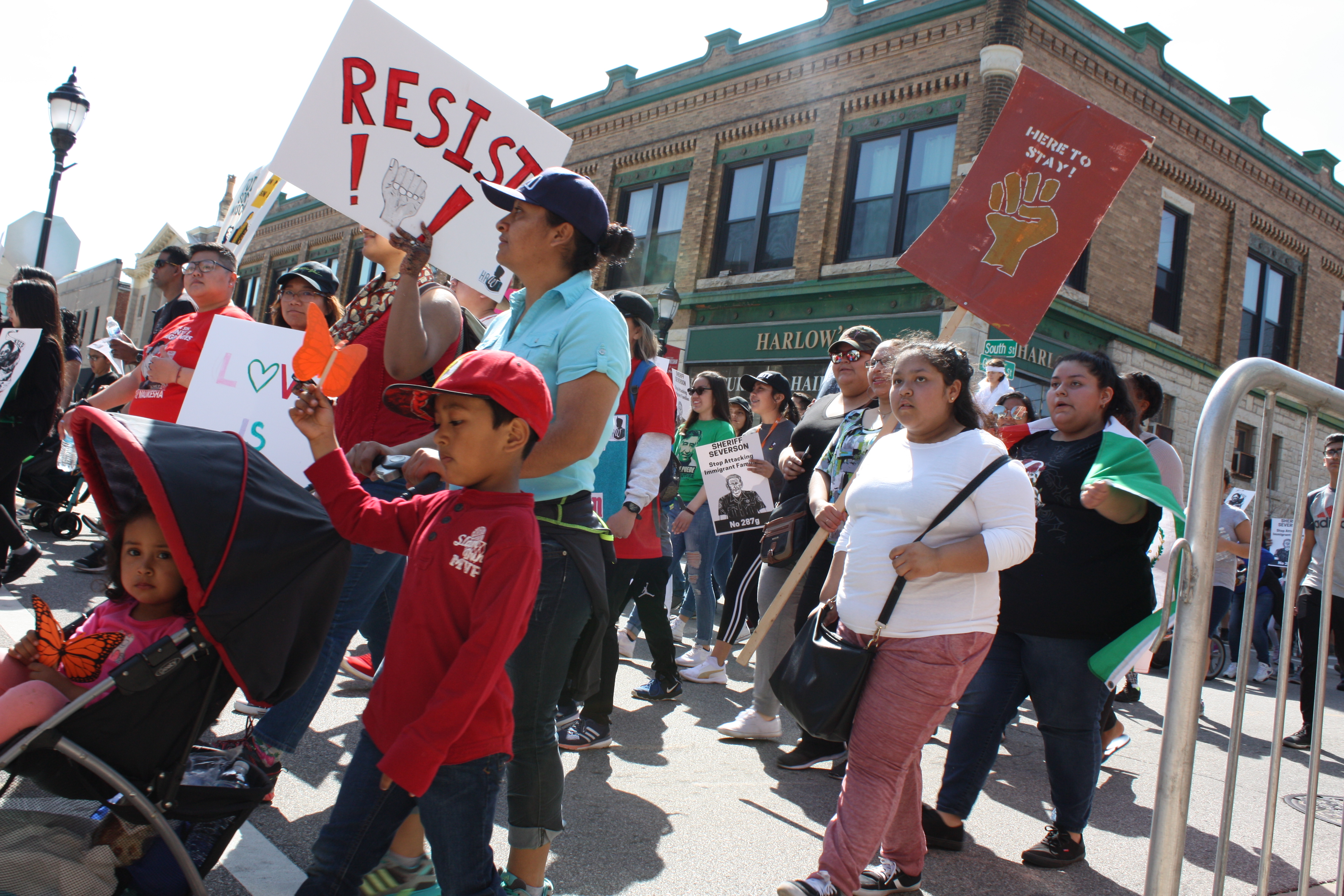 A bus full of young and old, immigrant and American-born straddles two Milwaukees, as it passes through the Marquette interchange. To one side, downtown, glittering with skyscrapers and luxury apartments; on the other, smokestacks and factories, monuments to a city built on industry. Occupying an aisle seat with her mother, a one-year-old — her caramel-colored face framed by jet-black hair — stares across the aisle, through wide eyes.

This bus, and dozens more from across the state, traveled to Waukesha on May Day to protest Waukesha County Sheriff Eric Severson’s decision to participate in the controversial 287(g) program. The demonstration, dubbed Dia Sin Latinxs E Inmigrantes (Day without Latino/as and Immigrants), was organized by Voces de la Frontera, a immigrant-rights group based in Milwaukee. People were encouraged to not attend work or school, to shut their businesses and to not make any purchases during the day to show the impact of Latinxs on the Wisconsin economy.

The 287(g) program, which trains local law enforcement to act as Immigration and Customs Enforcement (ICE) agents, allows law enforcement to stop and question people based solely on their suspected immigration status. 287(g), which gained notoriety in Maricopa, Arizona, has been widely discredited as racially discriminatory. Former Maricopa County Sheriff Joe Arpaio was convicted on federal charges after he refused to comply with a court order instructing him to stop using the program to racially profile Latinxs.

Leslie Flores, 16, a student at Waukesha South High School, said her parents, who are immigrants, “shouldn’t be afraid to drop me off at school … to go to their medical appointments … to go to the store.”

“If we don’t stop 287(g), my family might be the next to be torn apart,” added MPS Riverside High School junior Eduardo Castro, whose father has endured a stabbing and threats of deportation.

Deportations more than doubled in President Donald Trump’s first year, to 13,600, and people without criminal records have increasingly been targeted, according to news reports. The administration also discontinued the DACA program, which protected the American-born children of undocumented immigrants from deportation. Trump, whose policy has centered around securing the U.S.-Mexico border with a wall, attempting to ban migrants from Muslim-majority countries and slowing even legal immigration, pardoned Arpaio in August.

“We didn’t come here to burn an already great nation,” said Diego Benitez, a 17-year-old junior at Waukesha South. “We came here because we deemed out fatherlands unfixable.”

As many as 15,000 people, the majority of Latinx heritage, marched from Cutler Park to the Waukesha County Courthouse in a display that those who attended said was about demonstrating unity and strength in numbers. The approximately mile-long route stretched through portions of downtown as well as a quiet residential neighborhood.

One longtime Waukesha resident watched, enraptured, as the crowd passed by her home. “I feel bad,” she said, as her eyes welled up with tears. “I don’t think they’re being treated fairly.”

Police were present throughout, with an escort leading the marchers. Despite encountering sheriff’s deputies at the courthouse, the demonstration ended without incident.

During an impassioned speech outside the courthouse, Voces de la Frontera Director Christine Neumann-Ortiz touted the leadership of the many young people who attended and expressed solidarity with the people of Waukesha. “You are not alone,” she said. “We will not stop until 287(g) is gone.”

Neumann-Ortiz credited last year’s demonstration, where more than 30,000 people marched through downtown Milwaukee, as a factor in the federal government’s decision to deny former Milwaukee County Sheriff David Clarke’s application for the program. In 2016, Voces also organized massive demonstrations at the state capitol building in Madison to oppose two measures advocates described as “anti-immigrant.” A bill banning local governments from issuing ID cards to undocumented immigrants eventually passed, but a proposed law that would have forbid municipalities from creating laws “that prohibit immigration status inquiries” was defeated.

“There are people who want to divide us, because that’s how they manipulate us,” said Gerardo Lemus. “We need to move forward as one.”

“We become better people when we are exposed to ideas that are different,” Venta said. “Do not wait for someone to ask you to be part of the change.”⬩

Editorial Note: This article has been updated to clarify the date of the demonstration, which occurred May 1, 2018.

A 1-year-old sits on her mother’s lap during the bus ride from Milwaukee to Waukesha. (Photo by Jabril Faraj)

Young people, high school students in particular, made up a large part of the protesters. (Photo by Jabril Faraj)

Many children and families marched with the group. (Photo by Jabril Faraj)

Students of all backgrounds made up a large part of the group. (Photo by Jabril Faraj)

A crowd begins to gather at Cutler Park, where the march began. (Photo by Jabril Faraj)

A young man chooses a sign before the march. (Photo by Jabril Faraj)

Two women dressed as the Statue of Liberty and Lady Justice participated in the march. (Photo by Jabril Faraj)

Will you help us deliver local, people-centered coverage on the issues you care about? This work is supported by small, monthly contributions from people just like you. Join our mission by becoming a member today!