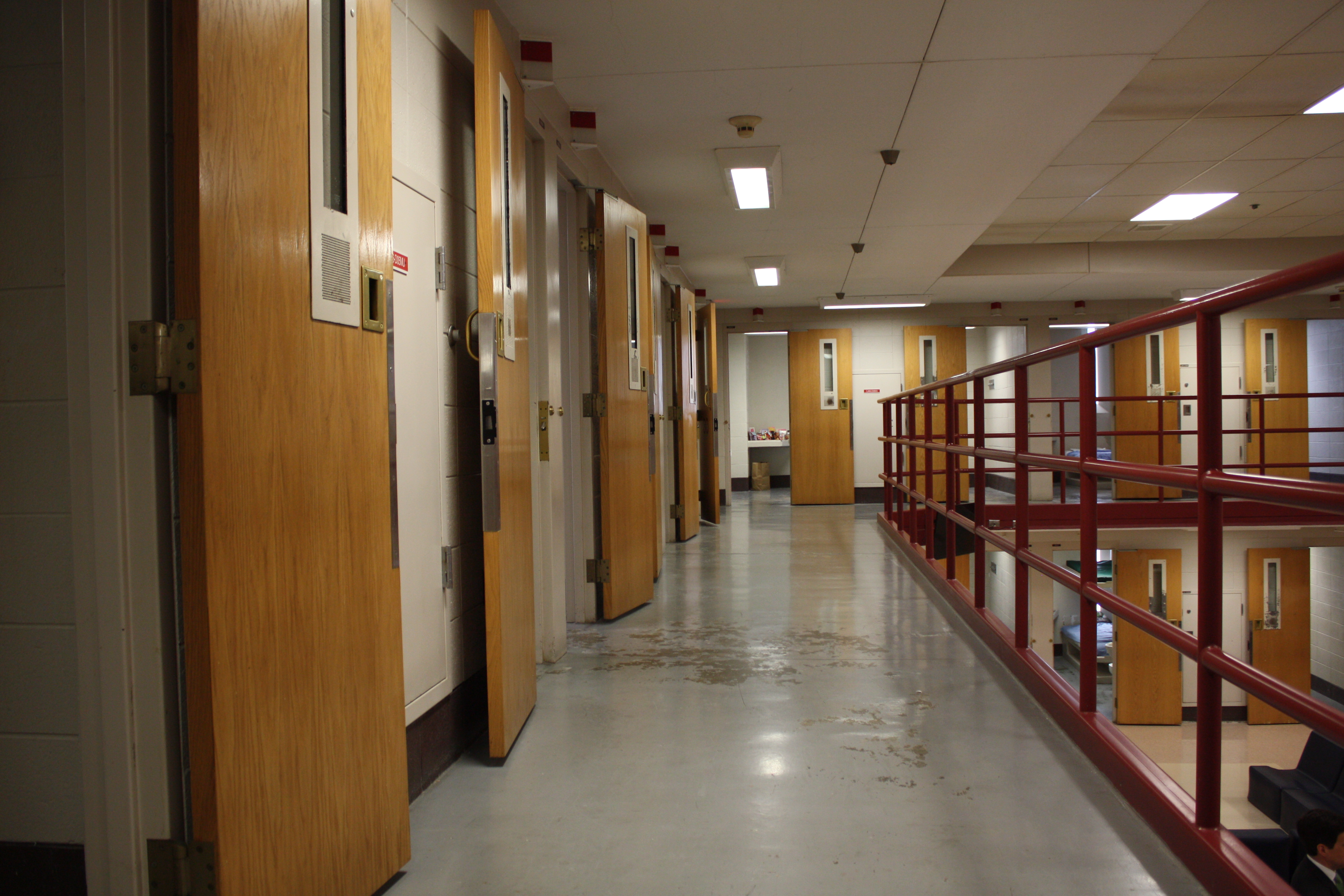 A pair of dry, crinkled underwear hang on the wall beside two white towels in a room located in one of 13 communal detention areas at the Milwaukee County Jail. A Vanity Fair magazine, Gideon’s New Testament and a pair of reading glasses occupy the surface at the foot of a neatly-made bed. On the bed, propped up against the pillow, are three photos, presumably of family, and a store-bought card, whose cover reads: “Someday your pain will become the source of your strength. Face it. Brave it. You will make it.”

Recently, Acting Sheriff Richard Schmidt hosted a tour of the County Jail, which saw seven deaths in 2016 and 2017 under former Sheriff David Clarke. Schmidt touted the changes he has made at the jail, particularly in leadership, and said that all but two recommendations from a recent National Institute of Corrections report on the jail have already been implemented.

However, community members are saying more needs to be done to engage residents, particularly formerly incarcerated people, in reforming the criminal justice system.

“We’ve experienced the system of oppression — we’ve been through it, and that perspective is needed,” said Mark Rice, Milwaukee campaign coordinator for Just Leadership USA and a member of Ex-Prisoners Organizing (EXPO). “The people close to the problem are close to the solution.”

Rice, who also sits on the Milwaukee Community Justice Council’s re-entry committee, added that he would like to see regular meetings to solicit input from “individuals from the communities that have been most directly impacted” by poverty and incarceration. He criticized the council for not involving more of those people.

Wisconsin incarcerates black men at a rate almost two times the national average. These numbers are driven by Milwaukee, whose 53206 ZIP code — which is 95 percent black — has the highest incarceration rate in the country.

“I expect all those voices to be at the table,” said Walter Lanier, a pastor and the community representative on the Community Justice Council’sexecutive committee, which includes city, county, state and federal officials. He said the council has recently begun to research national best practices for engaging community members and that he would like to see specific processes set up to allow residents to drive the agenda. He added that more representation on the council could be a part of that. “My vision is for us to be a national leader.”

“People are going to … do what they need to survive, whether there’s help from government agencies or not.”

This sign in the County Jail’s booking room shows the consequences an inmate may face if they get in a fight. (Photo by Jabril Faraj)

At a recent meeting, the Coalition for a People’s Sheriff, a diverse group of community organizations that lobbied for Clarke’s removal, delivered a vision to Schmidt that outlines what it would like to see from the sheriff’s office. The vision calls for an end to mass incarceration and “state violence” against communities of color, and a commitment to treating incarcerated individuals — including those who do not conform to a particular gender — with dignity. Specifically, it calls on the Sheriff’s Office to set aside 5 percent of its budget to be “reinvested​ into communities,” the “full legalization of cannabis” ​and “reparations for communities impacted​ by past racist drug policies.”

Wisconsin Working Families Party Political Director Rebecca Lynch said the meeting, the coalition’s second with Schmidt since he took over in September, was “night and day, compared to the last sheriff.” And Black Leaders Organizing for Change (BLOC) Executive Director Angela Lang, also a co-chair of the coalition, said she was “encouraged.”

“Every inmate must be treated with respect, with proper humanity, with proper nutrition and nourishment, and receive proper medical and mental health care,” said Schmidt during a news conference before the jail tour.

At any given moment, the county facility houses 900 inmates, 30 percent of whom, according to Schmidt, have “serious mental health conditions.” In 2017, there were 2,489 medical emergencies in the jail, and 726 inmates were transported to a hospital to receive further care. During the tour, a medical emergency occurred where an inmate became unresponsive, but ultimately survived, according to Schmidt.

He said, about 34,000 people pass through the County Jail every year while awaiting trial or arraignment.

“For him to say: ‘Look, I’m not in the business of trying to tear up families,’ and ‘The Latino community should not have to live in fear’ and him saying that he wants to prioritize mental health, they’re all really encouraging conversations … but … our work does not stop,” Lang said. The coalition will continue to apply public pressure to Schmidt and other officials, including County Executive Chris Abele, she added.

“We’re not looking for any temporary plans for permanent issues,” said Lang.

Rice, Lang and Lynch said one immediate step that could help to lower unnecessary incarceration is raising wages.

“People are going to … do what they need to survive, whether there’s help from government agencies or not,” said Rice.

He would also like to see more investment in mental health clinics, public education and “community-based treatment for people struggling with addiction and mental health issues.”

“There’s a long list of things … we could be investing in instead of needlessly incarcerating folks,” he added.

Abele said he supports “anything that will reduce the amount of incarceration we have.”

According to Abele, “The issue isn’t arguing with ourselves about who gets a limited pie— the important thing is growing the pie.”⬩

Editorial Note: A spokesperson for the Milwaukee County Sheriff’s Office attempted to censor the details of this story’s opening paragraph, citing privacy concerns. We do not believe those concerns to be credible, as we took care not to include any facts in the cell’s description that would identify the individual who lives there.

Sheriff’s deputies mill about in the booking administration area. (Photo by Jabril Faraj)

This sign details how inmates should conduct themselves in the County Jail’s booking room. (Photo by Jabril Faraj)

One of the private rooms that line the County Jail’s booking room has a phone and a toilet. (Photo by Jabril Faraj)

Rooms line the upper floor of one of the County Jail’s 13 general population areas. (Photo by Jabril Faraj)

This sign in the County Jail’s booking room shows the consequences an inmate may face if they get in a fight. (Photo by Jabril Faraj)

Did you find value in this story? If so, please sign up to receive periodic updates.

Will you help support us so we can continue to bring you the real stories of regular people? This work is supported by small, individual monthly contributions from people just like you. Please consider becoming a member today![donate]