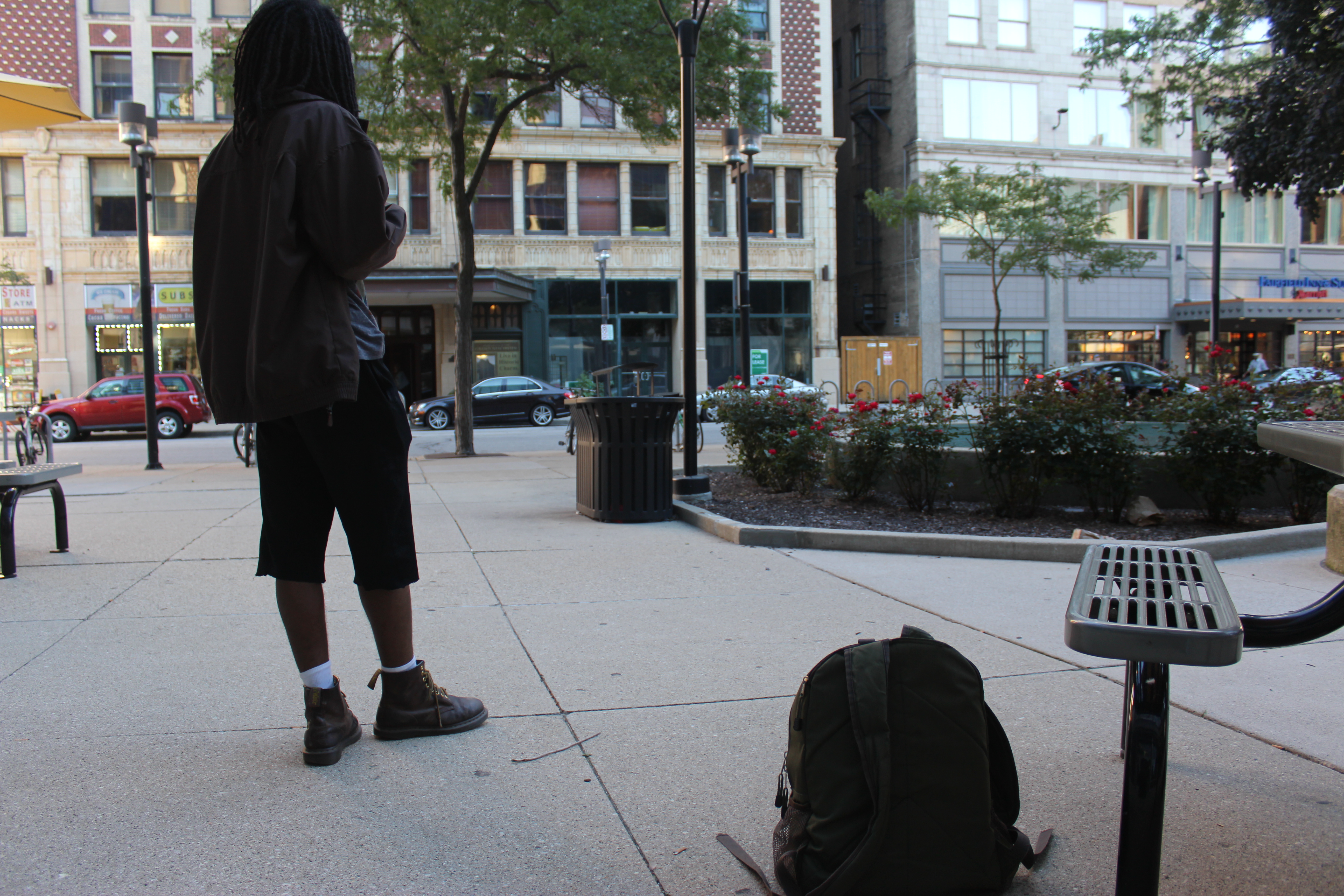 The sun relentlessly beams down from a cloudless sky while squawking seagulls circle and descend to pick at half-eaten remains, thoughtlessly discarded in a downtown alleyway. Sitting on a white stoop nearby is Brian Anders (pseudonym). He wears a dark brown T-shirt, rain jacket and black cut-off jean shorts. His cocoa-colored eyes, which restlessly survey the surrounding bustle, pair with a innocent smile.

“People judge the people out here who act crazy, but they don’t have nobody to talk to,” says Brian. “They went crazy. They didn’t just wake up crazy. It was a day by day gradual thing.”

Anders, the oldest of two, was born in San Diego. His mother and father met at a U.S Navy boot camp and relocated to the South Side of Milwaukee in 2001 to take care of his grandma who was fighting cancer. She passed six years later.

From his grandma’s house, Brian and his family moved three more times, as they became better off. He went on to graduate from Bay View High School in 2011, the same year his parents filed for a divorce.

The separation wasn’t much of a surprise.

“We kind of knew they wanted a divorce growing up but they stayed together longer for my little brother,” he says.

Since then, much has changed for Brian.

Anders talks to his brother, who lives with their father in West Allis, every day. But his relationship with his parents is strained. As he’s gotten older, Brian, who grew up Christian, has distanced himself from the strict tradition he was raised in.

“I always had questions,” he says. “When we were in church, I would ask the teacher but they never had an answer for me so I had to read more stuff. They said not to read other stuff because that’s the devil attacking you and all of that. But that don’t make sense to me so I just read more.”

Brian has continued to ask questions about the meaning of life and death, and the different perspectives people have. Three years ago he lost his apartment, which changed his outlook on life. He was evicted because of a loan that put him in a bad position, but, these days, he’s homeless by choice despite holding down two jobs.

Anders says being homeless isn’t easy but he views it as a learning experience.

“For me it’s like a growth thing. If you put yourself in situations for yourself to grow you don’t have to compare yourself to other people — you know for a fact you can get out of that situation,” he says. “I don’t care how people view me because I know how I feel about myself.”

He plans to create a guitar album and publish a book of his poetry, two things he’s been passionate about from an early age. He also plans to move back to California.

“I want to sit outside and not have to worry about it being cold or snowy all the time,” Brian says. “You gotta go far from certain areas to go see nice looking landscapes in Milwaukee. But if you go to California, it’s beaches, it’s mountains, it’s everything in a concentrated area.”

“I know for a fact I am not going to be doing the same thing one year from now,” he says.

“But in the meantime I am out here talking to people who people don’t talk to.”⬩