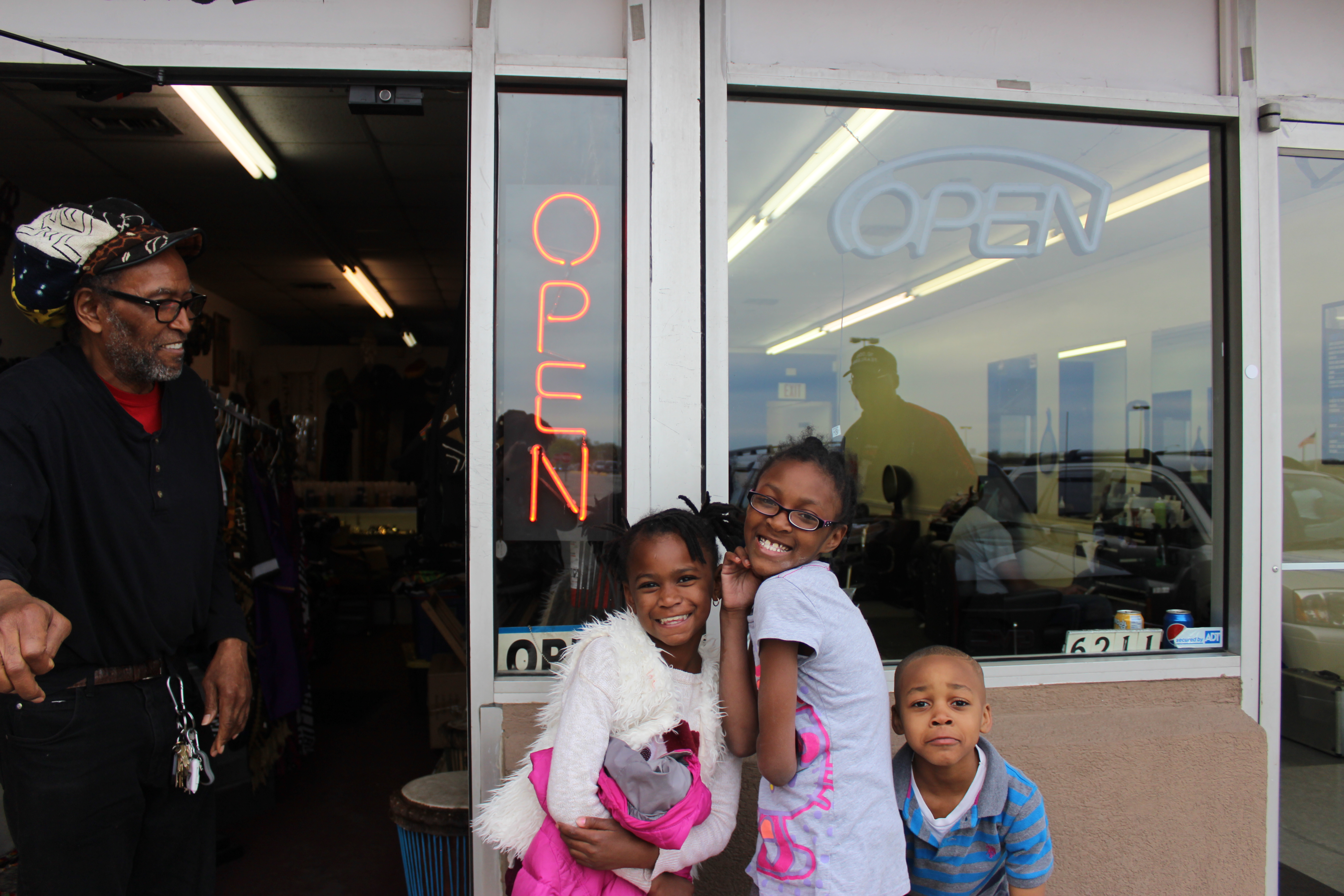 Earl Butler bends over to straighten the neon yellow sidewalk sign outside his shop, named “Pursenality.” It reads: ‘SERVING THE TRUTH SINCE 1996’. The shop sits inside the nook of the Silver Court Shopping Center, a strip mall just off North Teutonia Avenue, selling everything from crystal quartz pieces from Brazil to African soaps and scents, accessories, clothing and more. Two smiling, chocolate-complexioned little girls and a shorter toffee-toned boy, the unintentional culprits, apologize and continue chasing each other, paying attention to avoid knocking the sign again.

“I been here 21 years and I realized I couldn’t be here 21 days or 21 minutes without the support of the people,” Butler says, “So the people have spoken, and they say Pursenality should exist.”

Earl was born in Bogalusa, Louisiana, but moved to Milwaukee with his mother when he was 9 months old. He was raised in a house on Brown Street until, at the age of 9, Butler’s family moved again. The rest of his childhood years were spent on 20th and Locust.

“We knew everybody in like a 4-block radius,” Earl recalls, “We had more of a community relationship with one another.”

Earl and his mother continued to strengthen the bond of community by housing other relatives. Uncles, aunts and cousins would move in after migrating from the South, until they were able to live on their own.

The migration north was made in hopes of escaping the South’s harsh injustices and unsuccessful sharecropping. Hearing of bustling industry expansions and the possible opportunities elsewhere, Earl’s family followed.

“A lot of my consciousness came through when I went to North Division,” Earl says, “A lot came from the teachers there because they came out of a turbulent time.”

The time period he talks about was during the 60s, at the height of the Black Power and Civil Rights movements. His 10th grade English class read the autobiography of Malcolm X and literature from black authors during the Harlem Renaissance era, such as James Baldwin and Richard Wright.

“We did papers on them,” Earl remembers, “On Saturdays we listened to Curtis Mayfield and Gil Scott Heron and we would have to decipher what they were saying in the music.”

Earl then went on to the University of Wisconsin-Milwaukee to pursue Political Science and Africology. But, in the end, he didn’t attend his graduation, or pick up the degree he’d earned — at that point, he didn’t particularly care about having the piece of paper.

“That’s when I started understanding … we [as black people] have got to build our own institutions.”

Before owning his own store, Earl worked a variety of jobs. His first was cutting grass at age 8. When he saw other boys in the neighborhood with fresh, newly-bought tennis shoes and money, they referred him to a man named William, who organized groups of kids. They would go door-to-door selling mints, mixed nuts and chocolate turtles in the predominantly white neighborhoods of West Allis and Racine.

“I remember seeing lawn jockeys — you don’t see them like you used to today like that — but the little black figures out on their lawns they called them lawn jockeys,” Earl says. “That was kind of a racial thing, discriminatory position to have those out there, but you saw a lot of them during that time.”

His profits from selling sweets averaged at around 20 dollars a day, which was nothing to sneeze at back then. As he grew into a young adult, Earl worked at department stores and the Briggs & Stratton manufacturing company, where he was a lab analyst for five years. But he also did some individual work on the side, selling Dick Gregory’s bahamian diet and hygiene products backed by Louis Farrakhan.

Whilst selling those commercial products, Earl began to study his culture even more. He began collecting and selling cultural artifacts.

Butler would set up on the street, selling his collected books, jewelry and other products, networking with customers and gathering resources. He, then, traveled to different cities to sell at college campuses, festivals, conventions and conferences.

Earl says the idea for his store, Pursenality, came out of those experiences. “I wanted to do a store because of my children. They were getting a little older and I wanted to get off the road and spend a little more time at home.”

He recalls how challenging the first year was, sometimes having to shut down and go back on the road to sell at shows in the hope it would pay off.

“I had my car and it was leaning.” Earl extends his right arm, his hand gripping an imaginary steering wheel. His left side dips down as he pretends to hook a sharp left turn, while laughing. Sometimes, it was only hope that got him home.

But that business was his baby, and he treated it like one.

“You got to nurture it and feed it,” he says. “It can’t do anything for itself until … you put that time in.

“And, then, it’s able to stand as you continue to build it.”⬩