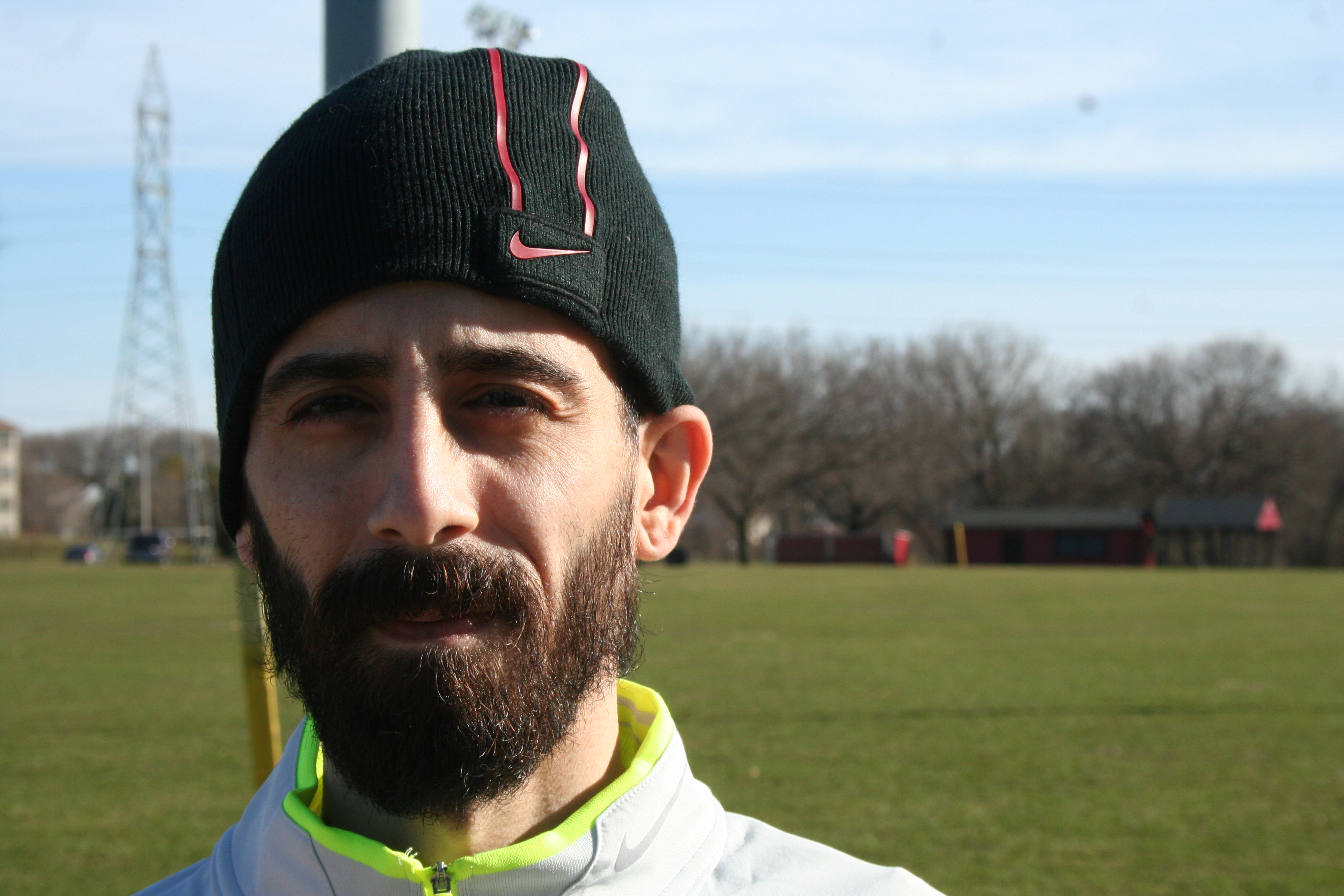 Alejandro Narvaez walks down West Crawford Avenue as his 8-year-old daughter pedals ahead on her two-wheel bike, complete with a horn and white handle streamers. Bearded, in a Nike beanie and athletic apparel, Narvaez’s slight figure and quiet demeanor are unassuming.

Alejandro grew up on the East Side of Milwaukee, near Holton and Hadley streets, but moved a lot as a kid and has lived in many different corners of the city. He spent spells on the northwest side and Wauwatosa, and lives on the South Side now.

A slightly different experience came with each place — playing cops and robbers as a child on the East Side, gaining an interest in Jordans and starting to collect them while attending Madison High School later on. No matter where he’s been, though, Narvaez was immersed in Puerto Rican culture, something he wants to pass on to his daughters.

But there was another side to that coin. Alejandro says a lot of his Puerto Rican friends, and some family members, were in gangs. It was one of the reasons his parents moved away from the East Side and why they eventually sent him to Boscobel, Wisconsin, to live with his uncle.

“I learned how to hunt, fish, all that other good stuff up there,” Narvaez says.

He describes many of his cousins as “rougher than usual.” “They’re all, you know, in jail or dead, or whatever.”

So, he did his own thing. “I didn’t wanna end up like them,” he says. “And, at the age of 20, I ended up having my first daughter so reality kinda kicked in.”

Alejandro has two daughters — one 16 and the other 8. As the first was on the way, he realized he had to get a job, something his ex’s father helped with. The position, at a non-destructive testing lab, turned out to be everything he could’ve asked for. Not only does he get to test everything from roller coasters to fireworks, but the owner has a philosophy that’s kept him there.

“He’s like, ‘Family’s first.’ That’s the way his mentality was, was, you know — family first, work always comes second.”

“When I first got hired on, it was supposed to be for three days and [they] ended up keeping me for 17 years. Went to school and everything — he paid for it.”

And, fatherhood, Narvaez says, came naturally. “I wasn’t scared. You know, I knew my duty was to take care of my girls and do whatever I have to for ‘em.”

“I always wanted that — you know, I just wanted to be there for my kids and support ‘em as much as I could.”

But, Alejandro has still made room for his passions, like music and DJing, which he fell in love with while watching his uncle spin as a kid.

“It makes me feel like I’m on top of the world,” he says. “Especially when you’ve got the crowd, you know, vibing off ‘a you and stuff like that — just feel that energy — and it’s just a cool feeling.”

Narvaez, with his 8-year-old daughter, in Wilson Park on Milwaukee’s South Side. (Photo by Jabril Faraj)

Narvaez started spinning about 10 years ago, after meeting a local DJ. He was even playing some clubs downtown and on the South Side. But, after breaking up with his ex, he sold all of his equipment.

Though he isn’t with either of his children’s mothers, Alejandro says they still talk from time to time. “I still try to keep that communication between us good because my daughters deserve that, you know?” he says. “I feel like, you know, stuff happens in life and you just gotta keep on moving forward. It just wasn’t meant to be. Everything happens for a reason — that’s my theory.”

That theory has been tested, time and time again. About eight years ago, Narvaez’s parents split after 30 years of marriage, a change he called “devastating.” At first, he says he was heartbroken, but there was a silver lining. It gave Alejandro and his mother a second chance at a relationship.

“We weren’t as close in the past,” he says. “I had a baby sister — she was prolly like three years old and she ended up passing away in her sleep. Ever since that, I felt like there was, like, a little distance between me and my mom. And, I always just wanted her to just be like … a grandma type — you know what I mean? Just, you know, always there — there for the grandkids and stuff like that. It was hard at first and, you know, I kinda told her how I felt from my heart.”

His mother — who he calls “the glue to the household” when he was growing up — wasn’t often one to show her feelings, something he needed. They’ve taken the opportunity to mend old wounds.

“We’re workin’ on our relationship. Two years ago, you know, I started goin’ over there, she’ll come over, she’ll pick up the girls to go take ‘em out and stuff like that. So, everything’s shaping up.”

At this point, Alejandro’s main goal is to buy a house, something he wants to do in the next couple years.

“I could do what I wanna do, you know? I can have my basement the way I want it, you know what I mean? I like to paint, too — I paint on canvass and stuff like that — I do a lotta painting … so I’d like to have my own art room, my own DJ room.”

But, either way, Narvaez plans to keep it interesting. Otherwise prone to boredom, he says variety is a must.