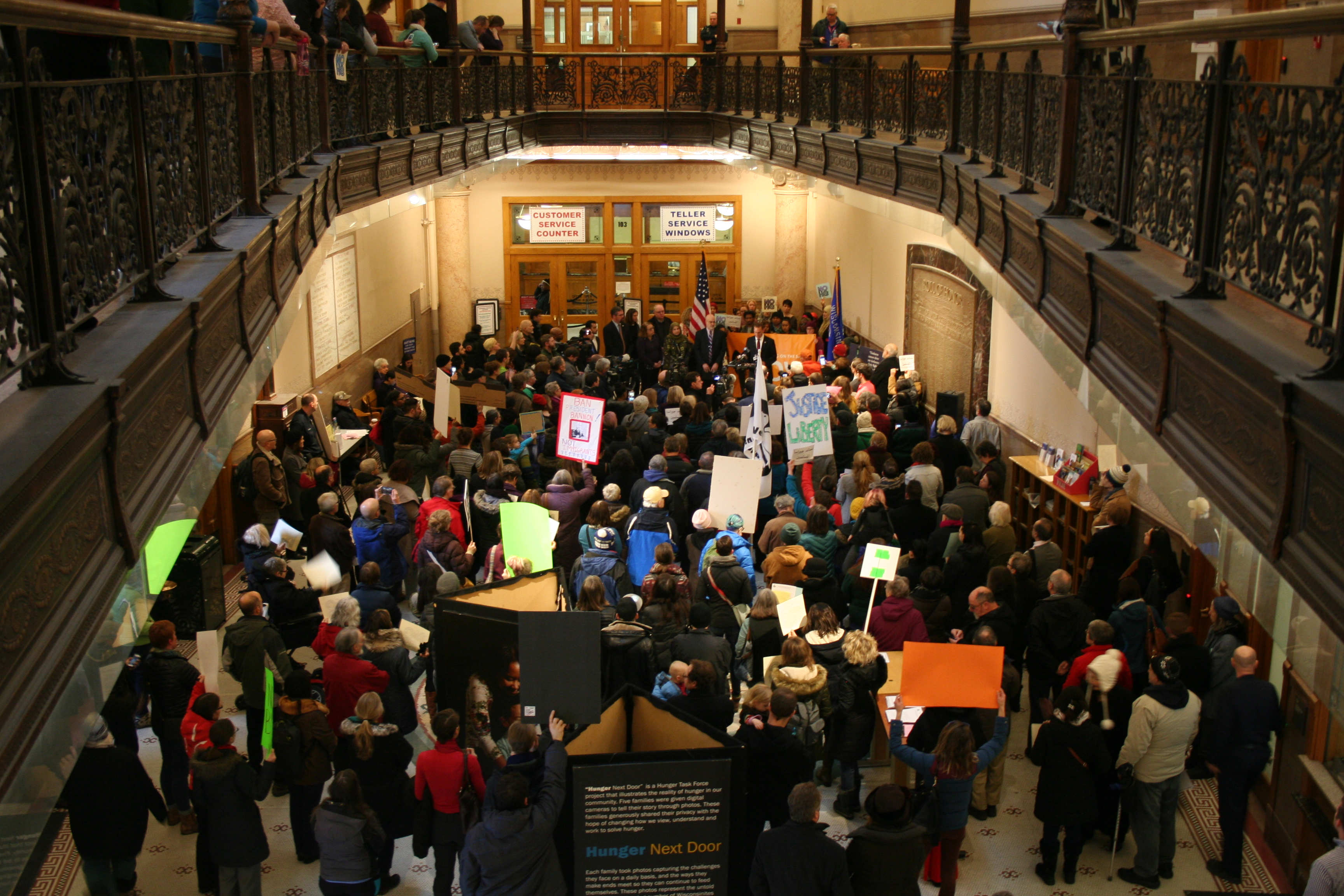 Milwaukee-area legislators, Muslim Americans and others recently gathered at City Hall to oppose a recent executive order issued by United States President Donald Trump’s administration that indefinitely bans Syrian refugees, and temporarily bans all refugees, from entering the United States. Individuals from seven Muslim-majority countries were are also banned from entering the country for at least 90 days.

At the event, Democratic state representatives Jonathan Brostoff and Chris Larson unveiled a joint resolution, supported by 19 Democratic state legislators, that condemns violence, hate speech and expresses solidarity with “Muslims and all those targeted for their ethnicity, race or religion.” The American Civil Liberties Union (ACLU) of Wisconsin and other pro-Muslim groups expressed support for the measure.

“When we fail to see the humanity in others, we fail humanity,” said Brostoff, who talked about his Jewish family fleeing violence in Europe to come to the United States. “Now, more than ever, we must lift our lamps and light the way toward love and understanding.”

The order, issued by the Trump Administration on Jan. 27, a week after his inauguration, suspended the United States Refugee Admission Program (USRAP) for 120 days; it also denies entry to anyone traveling from Iraq, Syria, Sudan, Iran, Somalia, Libya and Yemen — all Muslim-majority countries — for 90 days. Notably absent from the decree are the United Arab Emirates, Egypt and Saudi Arabia. Those nations have accounted for 2,845 terrorism-related deaths on U.S. soil since 1975, far more than all other countries combined.

Janan Najeeb, founder of the Milwaukee Muslim Women’s Coalition, said Trump, who advocated during his campaign for a ban on all Muslims entering the United States, knew the order would be unconstitutional if it was based explicitly on religion. She called the order a “backdoor Muslim ban.”

“I think it’s a game,” she said. “This is clearly a law based on bigotry and racism.”

In an appearance on Fox News, former New York City mayor Rudy Giuliani said Trump tasked him with finding a way to formulate an order that would achieve the president’s goals while standing up to any legal challenges.

“America and all the countries in the world can be great, but it is through unity and through understanding and valuing human rights and human freedom,” said Rada Nikova, a Bulgarian immigrant who met her husband in the United States and moved here permanently four years ago. “We have to evolve instead of going backwards.”

A Muslim individual from one of the seven countries singled out by the order said his wife, who was just admitted to a Milwaukee-area university, left the United States in December to convert her visa to a student visa — now, she’s unable to re-enter. The man, who did not want be identified for fear that his wife would not be approved once the ban is lifted, said the couple’s future in this country is now in question. He is also a student.

“We both are shocked,” he said. “We don’t know what will happen for our future. We came here to have a better future. Personally, I came here to make a better life for my wife … as she is not here, I am so disappointed. The only way that I have, if she is banned from coming here, [is] that I resign my Ph.D degree and go back to my country and join her.”

A Pew Research Center analysis of hate crimes statistics from the FBI showed that hate crimes against Muslims in the U.S. reached “9/11-era levels” in 2015, increasing 67 percent over the previous year. Eleven percent of Americans believe “most” or “almost all” Muslims are anti-American and almost half think Islam is more likely than other religions to encourage violence.

According to a 2016 study by Pew, Muslims are about 1 percent of the total U.S. population. That number is projected to double, to 2 percent, by 2050. About 6 out of 10 U.S. adults said there was “a lot” of discrimination against Muslims; even more said prejudice is increasing.

“The Muslims of this county, of this city, are valuable citizens who have contributed much,” said Islamic Society of Milwaukee President Ahmed Quereshi.

He recalled being taught the words of Emma Lazarus’ poem, The New Colossus, which is engraved on the base of the Statue of Liberty:

Not like the brazen giant of Greek fame,
With conquering limbs astride from land to land;
Here at our sea-washed, sunset gates shall stand
A mighty woman with a torch, whose flame
Is the imprisoned lightning, and her name
MOTHER OF EXILES. From her beacon-hand
Glows world-wide welcome; her mild eyes command
The air-bridged harbor that twin cities frame.

“Keep, ancient lands, your storied pomp!” cries she
With silent lips. “Give me your tired, your poor,
Your huddled masses yearning to breathe free,
The wretched refuse of your teeming shore.
Send these, the homeless, tempest-tost to me,
I lift my lamp beside the golden door!

“This is the true creed,” Quereshi added. “This is what it means to be American.”

The executive order also declares that entry of more than 50,000 refugees to U.S. in 2017 would “be detrimental to the interests of the United States.” That number is significantly less than the 85,000 accepted in 2016 and less that half of the Obama Administration’s pledge for this year. Worldwide, 65.3 million people, a record number, have been forced to leave their homes; there are 21.3 million refugees around the globe, according to UNHCR, the United Nations refugee agency.

The Trump Administration order cited “deteriorating conditions in certain countries due to war, strife, disaster, and civil unrest” to justify the need to crackdown on immigration. Four of the seven countries singled out have been bombed by the United States since Sept. 11, 2001. And, in 2011, the U.S. spearheaded a NATO-led effort to oust Libyan dictator Muammar Qaddafi, a move that has thrown the country into chaos.

Najeeb said she believes that there is substantial support in the new administration for a total, indefinite ban on Muslims in the United States. Language in the executive order leaves open the ability to extend the order, and add other countries to the list.

Though Najeeb said she is worried about the effect this move will have on people seeking to escape violence, she added that she has been heartened by the response.

Pablo Muirhead said it seems the administration’s position is based on fear. Muirhead, whose cousin was on American Airlines Flight 77, the plane that flew into the Pentagon on 9/11, said we need to “let the folks in immediately that are waiting at our doorstep.”

Muirhead, who was born in Peru, raised in Milwaukee, attended college in Indonesia, has lived in and traveled to more than 20 countries, added that inter-cultural exchanges are important.

“I think the best thing we can do is get to know each other, and understand each other’s faiths.”⬩

Update (Feb. 5, 2017): A number of court rulings have prevented the executive order from being enforced. A federal appeals court on Sunday ruled that President Trump’s controversial immigration order will remain suspended for the time being, allowing those previously banned from coming to the United States at least another day to get here.

Update (Feb. 24, 2017): On Feb. 9, a three-judge panel in the Ninth Circuit Court of Appeals unanimously upheld a lower court decision blocking the Trump Administration from enforcing the order. The administration had said it will bring a re-tooled order, possibly as soon as this week.