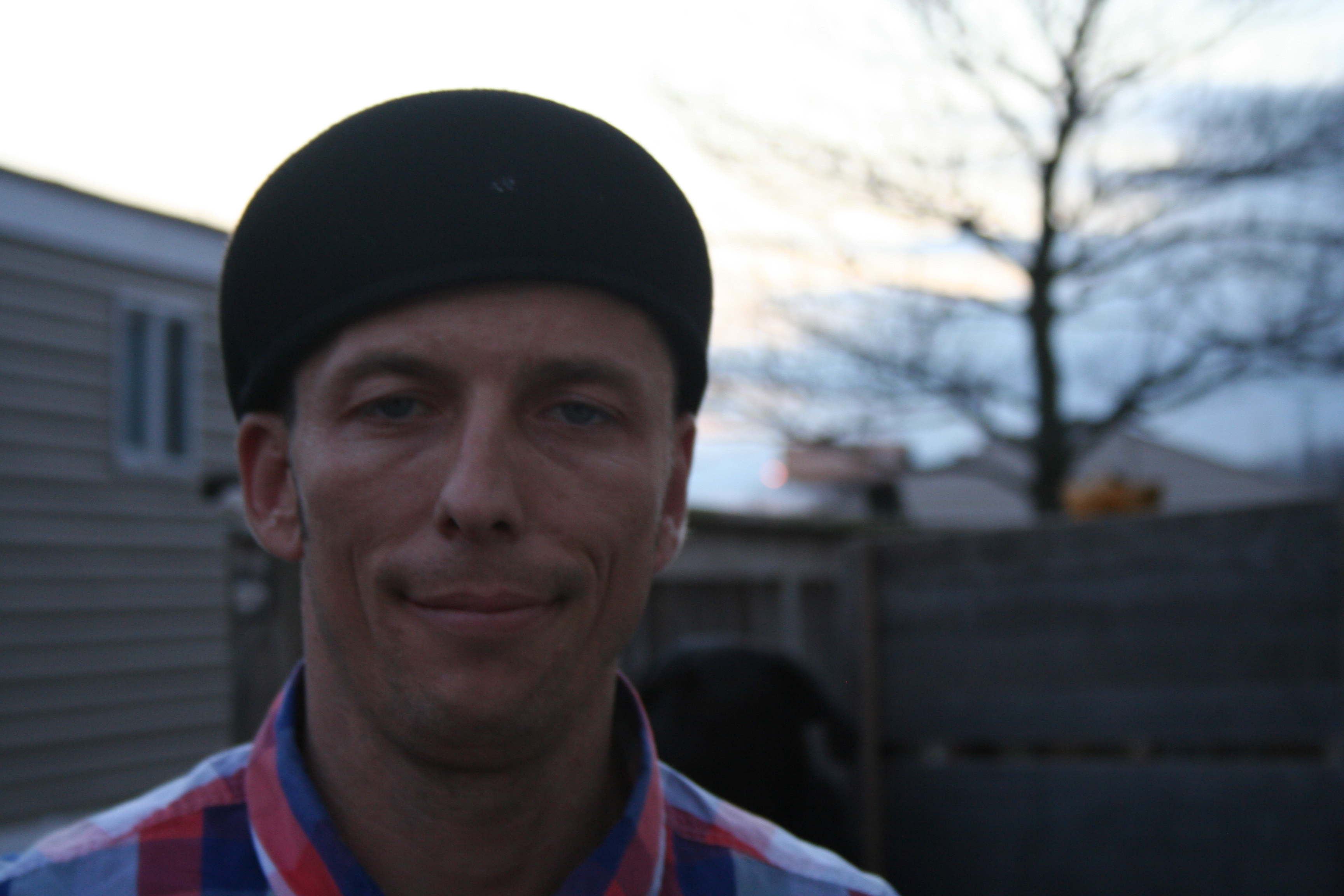 Daniel Kwasigroch walks down South 6th Street, right outside the Tower View trailer park, with a pail of gravel in each hand. From his weathered fingertips to a slightly-toothless smile, Kwasigroch has a look of quiet perseverance.

“I was born two months premature — four pounds, two ounces — I almost died while I was bein’ born and my mother almost died givin’ birth to me,” he says.

Daniel came into the world at Waukesha Memorial Hospital, and lived in Waukesha for two years before his mother moved him and his older brother to Winter, a small town in northwestern Wisconsin. When he was two years old, Daniel’s mother, an alcoholic, walked in front of a car while she was intoxicated; she was hit and killed.

“I don’t have any memories of her,” he says. “My dad remarried when I was 5, so I grew up, you know, with a stepmom that loved me unconditionally. When I think of it, yes, it would be a lovely, you know, blessing to know my real mom and have memories with her. But, I was too young to keep those memories.”

“There’s been times where I’ve asked god why, you know, he had to take my mother [away from] me at such a young age,” Kwasigroch says, adding that he’s never asked about what she was like.

“Have I wondered? Of course. Am I scared to ask? Yeah,” says Daniel. “They say she was a beautiful person. But the whole key thing is about the alcohol and whatever drugs she did. You know, I will never know. And, do I wanna know? Probably not.”

Alcoholism and drug addiction run deep in Daniel’s family — his father’s family has struggled with alcohol addiction and many of their children have had drug problems, he says. It’s a spectre he wasn’t able to escape.

“I had a whole bunch of bad years of bein’ a mess,” says Kwasigroch, who admits to being addicted to drugs at more than one point in his life. “So, now, instead of lookin’ at, you know, the negative aspect, like, ‘God, why did you take my mom?’ I think, with her addiction problems that she had, you know, it was actually … not better. But, I think if I woulda, you know, grew up with her who knows if I would still be alive. Who knows — I coulda had a lot worse life than I [have].”

“I mean, I can’t say my childhood was bad, you know, but it definitely wasn’t good,” he adds. “I was the youngest, so I had to do what I was told when I was told. I wouldn’t get beat up but, you know, bein’ the youngest of six, you get picked on the most.”

Daniel says he hasn’t really kept in touch with his siblings — including his four step-siblings — except when he was using with his brother. Still, they didn’t see each other much, since Kwasigroch says he was ashamed of the life he was living. Then, about 10 years ago, his life changed.

Around that time, Daniel was seeing a woman who he says “treated me like crap.” He knew he needed, and wanted, something different.

“I was tellin’ myself that, you know, I need to find a woman that’s a real woman — a person who loves me for who I am, not the material things I have, one that didn’t do drugs, one that didn’t sit in the bar.”

In Paula, he found what he was looking for. “She saved my life,” says Daniel. “Immediately after I met her, she said it was either her or the drugs. I chose love, you know, ‘cause she loved me for the person who I was.”

“I went sober for three years after I met Paula and everything was fine,” says Kwasigroch. “But once an addict, always an addict. I came in contact with my brother, and he had came over to my house and brought some drugs with him. And, uh, I ended up doin’ some and, then, ever since that, you know, it was a slowly, slowly gettin’ back into doin’ more and more drugs. And, um, fell deeply into my disease of addiction. Basically cost me very, very rough nights with me and my girlfriend to the point where I had to do somethin’ about it — I had to admit to her that, you know, I was powerless over my addiction and my life was unmanageable.

“She accepted that, I went into treatment, got help, went sober for three months, ended up relapsin’, came back here, was livin’ back at the house, told her that I wasn’t doin’ drugs anymore but, you know, she’s not stupid.”

“She was in a bad car accident so she was getting prescribed Vicodin,” he says. “I started takin’ pills from her and, uh … started to get un-trusty.”

As his addiction began to resurface, Daniel stole some of Paula’s jewelry, and pawned it for cash to buy drugs. But it wasn’t long before that caught up to him.

“[I] was sitting down doin’ some yard work and a detective from Greenfield showed up. I knew why he was there … I was lookin’ at five felonies,” he says.

This incident, which was around the end of last summer, again forced Kwasigroch to take a hard look at himself. He says the officer wasn’t as tough on him as he could have been, and Daniel was able to get the charges dropped to a simple misdemeanor.

Once he was released, he called Paula, dejected, and offered to leave. Daniel was convinced he didn’t deserve to live, or be, with her any longer. But she wasn’t ready to give up on him.

“She gave me options,” he says. “She’s like, ‘Either walk out that door right now and never talk to me again, or get yourself into treatment.’ And, uh, if I woulda said ‘no’ and went out and isolated myself … I woulda probably ended up killin’ myself.”

Daniel admitted himself to Rogers Memorial Hospital, which specializes in alcohol and drug rehab, treatment of disorders and mental health issues. After being there for a week, he went to the Salvation Army, where he is receiving continued treatment.

He walks into the trailer park, gravel in hand. It’s for potting a new plant of his step-mom’s, he explains, describing the process. The gravel will go in the bottom of the pot, in which they’ve already drilled holes, with the soil and plant on top. The set-up, he says, allows the water to drain so the plant doesn’t drown.

Kwasigroch, who’s been sober since August, is working to regain the trust he’s lost. He says he’s looking forward to “living life on life’s terms, gettin’ a job and being a productive member of society.”

“My family … is pretty much my life,” he says, of Paula and her 14-year-old son. “I’m sober, and I’m starting to get, you know, conversations and time with my family that I destroyed.”