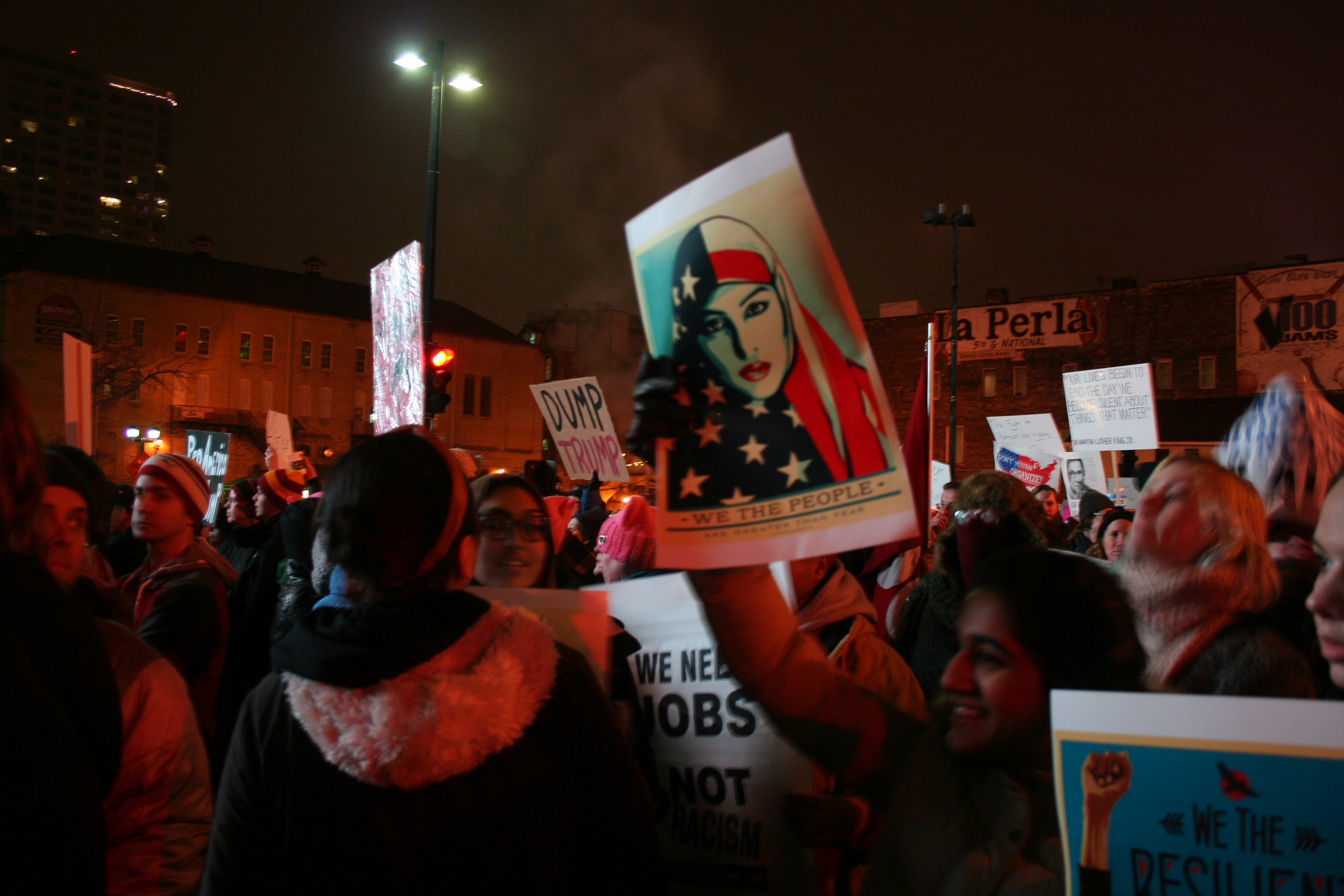 As the sun fell on Inauguration Day, nearly 1,000 demonstrators gathered in Red Arrow Park in downtown Milwaukee to protest the policies of Donald J. Trump, who became president earlier that day.

Trump, who launched his presidential run with a sprawling speech at Trump Tower in New York City, in which he called Mexicans “rapists,” ran an unprecedented campaign, in terms of both tactics and tone. With a candidacy that tapped into the frustrations of working-class whites and an opponent who was the second most disliked presidential hopeful ever (Trump was the most unfavorable), he was elected on a wave of populism, aided by far-right, racist movements.

The son of German- and Scottish-American immigrants, Trump got his start with a $1 million loan from his father, real estate mogul Fred Trump, who was investigated in 1973 for civil rights violations alleging rental discrimination in his residential properties. Trump has promised to build a wall between the U.S. and Mexico, re-negotiate trade deals to bring American factory jobs back, escalate the war on ISIS and deport millions of undocumented immigrants. He has expressed support for banning Muslims from the country, has said he would nominate supreme court judges that would overturn Roe v. Wade and has made his distaste for the media clear, threatening to “open up” libel laws to make it easier to sue journalists and news organizations.

The billionaire has made headlines for boasting about sexually assaulting women on video tape, the unscrupulous dealings of his foundation and the many financial, and other, conflicts of interest he brings to the office.

“I feel like he’s not for the people in the way he claims,” said Ellen Wagner, who moved to Milwaukee two years ago. “I feel that he’s for his 1% and he’s not going to do anything that’s gonna benefit anyone else but … the people in his group.”

Wagner, who is black, said she believes people were persuaded to vote for him because of the message he put forth, one of upending the status quo. She said people are desperate for a change and hoped against hope that Trump might bring that change.

“That’s what I think people are trying to attach themselves to, but that’s not what’s gonna happen,” Wagner said.

“I do not hate Donald Trump, I just hate all the policies that he has, and the fear that he’s igniting,” said Nadia Malik, an 18-year-old Muslim-American. “The fear was already there, the hate and ignorance was already there, and now he’s just saying, like, ‘Hey, it’s okay, let’s hate these people, let’s spread hate.’ And, it’s not okay.”

Though Trump won 306 out of a possible 538 electoral college votes to take the presidency, he lost the popular vote by almost 3 million. With an approval rating below 50 percent, Trump enters office as the most unpopular presidential victor in history. People who were at the rally said they attended to support the rights of African-Americans, Muslims, women, immigrants and individuals who identify as LGBTQIA, groups that have felt threatened by the president’s rhetoric. Many of those in attendance represented these segments, as well.

Zach Liszewski, who said he has friends who identify with many of these groups, believes in “equal rights for everyone” and came to the rally to voice his support for that ideal.

“I have friends all over the board,” he said. “What affects them is gonna affect me, and it’s gonna affect all of us. The least I can do is stand with everyone else to make a statement and be heard.”

Antonio Rodriguez, 32, who is gay and of Mexican descent, said he has reached out to Voces de la Frontera, a local membership-based community organization, and plans to fight for immigrant and migrant rights. He also said he intends to educate himself more on any proposed legislation — not just on the national but local level as well — to scrutinize elected officials and make sure they are truly representing the people’s interests. Others suggested donating to groups working for equality and getting more involved in local politics and issues.

“This isn’t going to be the last protest,” said Liszewski. “Just don’t let yourself be silenced.”

“For these next four years, I don’t see anything very positive, unless we get enough people to stand up to what he is gonna go, what he said he’s going to do,” Liszewski added. “People will say that there’s nothing we can do, but they’re wrong. The government has no choice but to listen to us.”

The crowd of about 1,000 people included individuals of all ages, ethnicities and identities. (Photo by Jabril Faraj)

Wagner brought her 3-year-old daughter to the event because she said it was important for her to see was is possible. “You can make a change if you just try and get out there. One voice can be heard and, in a group, I feel like it’s powerful.”

Individuals who were interviewed said they hope to see people come together and be more accepting of each other, and that the government is responsive to its people. Wagner said that, after Trump, she hopes for “a president that actually is concerned about all these things that we are constantly fighting for,” including health care, equality under the law and a level playing field for everyone.

“People need to open their eyes,” Rodriguez said. “Hopefully doing things like this gathering will let people hear voices, let people hear the other side of what’s going on and start getting the urge to look into what’s happening around them, not just what’s in front of them for their own — that there’s other people in this world that they have to also look after, because their own interests may affect somebody else and so on, and so on.”

Malik, a freshman at Marquette University, said it is important to listen to people, including Trump supporters, without demonizing them. She noted that Trump supporters also have “legitimate concerns.”

The crowd marched down West State Street to chants of “No borders, no nations; stop deportations,” “The people, united, will never be defeated” and more.

“This is nothing new,” said Ann Heidkamp, 65, who has been involved in activism since the Vietnam War and Civil Rights Movement. “It’s just a new era, new struggles, new challenges.”

“I wasn’t anticipating that we would go here after Obama, but here we are,” added Heidkamp. “And, in some ways, it’s forcing those with these values of justice and inclusivity to say, ‘We can’t take it for granted, we’ve got to keep showing up.’ In a certain sense, it doesn’t matter who’s in power — these forces are out there, and we’ve got to be on guard, and understand what’s at stake and who’s being hurt and then work to make the change. Because, ultimately, it will be the people who make the change, not the politicians.”⬩