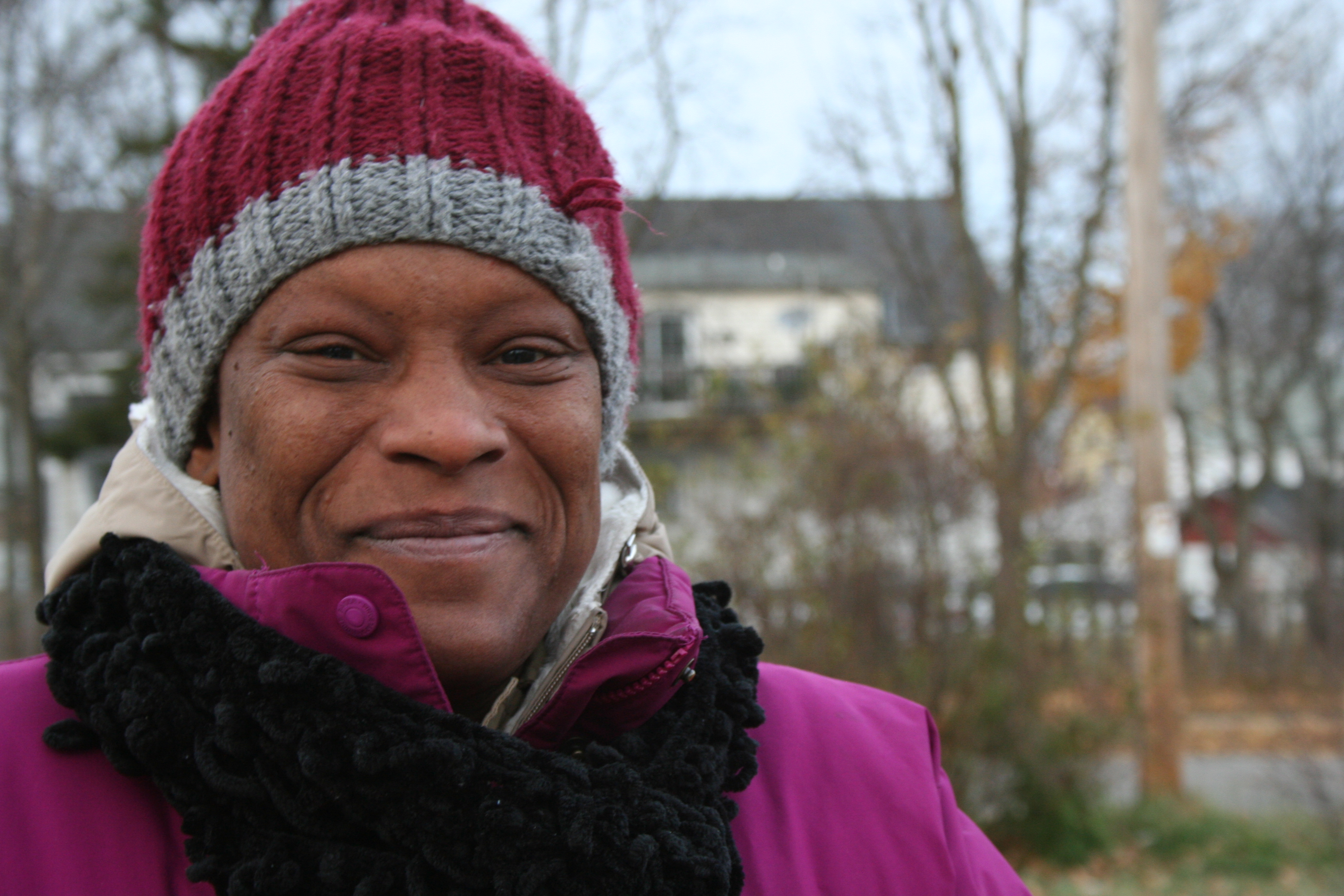 Violet Young walks briskly down North Richards Street dressed almost entirely in purple, a plastic bag in each hand. Exuberant and cheerful, even the below-freezing temperatures can’t dampen her spirits.

“You should see what it looks like in summer,” she says, gesturing to a nearby corner park with fruit trees and a small shelter. “It’s beautiful.”

Young’s family moved to the neighborhood more than 25 years ago, and have lived in the area ever since. Initially, they moved near Richards and Keefe, on the north end of Harambee.

“It was kinda rough,” Violet says. There was a lot of gang activity, she says, which was scary, as a child.

“And, then, when we moved here … all these people on this block, they’re all homeowners, so it kinda mellowed down a lot — you know, everybody was really, like, family-orientated and the community was for each other.”

She’s lived in different homes, but hasn’t left the neighborhood since. Now, she resides near Wright Street.

Violet says her childhood was “kinda rough” but “good at the same time.” There were times when they were on welfare and, as the oldest of six, the responsibility to help often fell to her.

“I had to look out for my sisters and brothers, and they really looked up to me and everything,” says Young, adding, “I had great parents — I had a good upbringin’. It was just the surroundings that was … scary. You know what I mean?”

Initially, Young attended Milwaukee High School of the Arts, where she played the violin. After getting kicked out because she “made a couple mistakes,” she graduated from Career Youth Development and went on to take two years of classes at MATC, focusing on computer drafting. But, in the end, Violet was drawn to something else entirely — for the past 10 years, she’s been a Personal Care Worker, working in home healthcare.

“I wanted to go to school to be a nurse — I never had the money to go to school. I coulda got—you know, there was other means but I had, you know, so much was goin’ on in my life — helpin’ my mom, and takin’ care ‘a my sisters and siblings and their kids.”

“My mom caught cancer — uterus cancer — in ‘88, ‘89, somewhere around there. So, I had to help take care of my sisters and brothers while she was in the hospital and stuff like that.”

Despite giving up so much, Violet, who also volunteers at her church, says she’s generally content with where she’s at.

“I love helpin’ people,” she says. “I love to help people who don’t have family to help ‘em, you know what I mean? I have a client, and he’s really sick — he’s had AIDS since 1989 and he’s battled cancer twice.

“I just love puttin’ a smile on his face, knowin’ every day he looks forward to me bein’ there, and that I can help make his day better. You know what I mean? That’s the highlight ‘a my day.”

Young says her family is very close, and many still live on the East Side — a sister who just returned from more than 10 years in the Marines is on Humboldt and another sister lives on Wright Street. Two of her brothers are a little farther away, but still in Milwaukee; her mother has been in remission for more than 20 years.

“We congregate every Sunday for dinner,” she says with a smile. “Every Sunday, faithfully, we have dinner at my mom’s house — every Sunday.”

“It’s so much fun because now we got the kids, you know?” Violet says. “Kids are funny, and it’s so funny to see them all — you know, especially the littler ones — when they can’t talk, and they’re tryin’ to talk, and how they communicate with one another. It’s just so funny; kind of reminds me of my childhood, how me and my [siblings], how close we were. They’re so close that they actually look like they could be sisters and brothers, but they’re cousins.

“It’s just—it’s awesome. I love it. You know, I look forward to Sundays.”

Though she loves her nieces and nephew, the 38-year-old doesn’t have any children of her own. About 10 years ago, she found out she was pregnant. But it didn’t turn out the way that she’d hoped.

“It was the best day of my life. I just went to a clinic to take the test so I hadn’t made it to the doctor to get an ultrasound, I didn’t know I was pregnant in my (fallopian) tube, and I just remember havin’ — it was December 27, 2006 — it was the worst pain that I ever felt in my life. I think I, like, passed out.

“The next morning I remember my boyfriend carrying me out the house to my uncle’s car, and he got me to the hospital and they told me, ‘Well, Violet, you have internal bleeding.’ I had to have three blood transfusions, they had to remove my fallopian tube — it was terrible.”

Young calls herself “blessed” and says she’s just lucky to be alive. By the time she made it to the hospital almost five-and-a-half cups of blood were loose inside her belly.

Utterly undeterred by the challenges she’s faced, happiness can be heard in every note she speaks. Violet says that optimism is largely a result of her faith. She tries to keep perspective, too.

“There’s people in a lot worser predicaments than I am. You know, I think about … I could be somewhere else, or not even be here. So, I thank god for that every day.”

She’s still looking forward to going to school and wants to become a Certified Nursing Assistant. Young has dreams of owning her own home, much like her parents, who also operate a rooming house for men in need. She says she wants to follow in their footsteps.

“Once you own somethin’ that you worked so hard for, it means so much more to you. You know what I mean? It’s better than bouncin’ around.”⬩