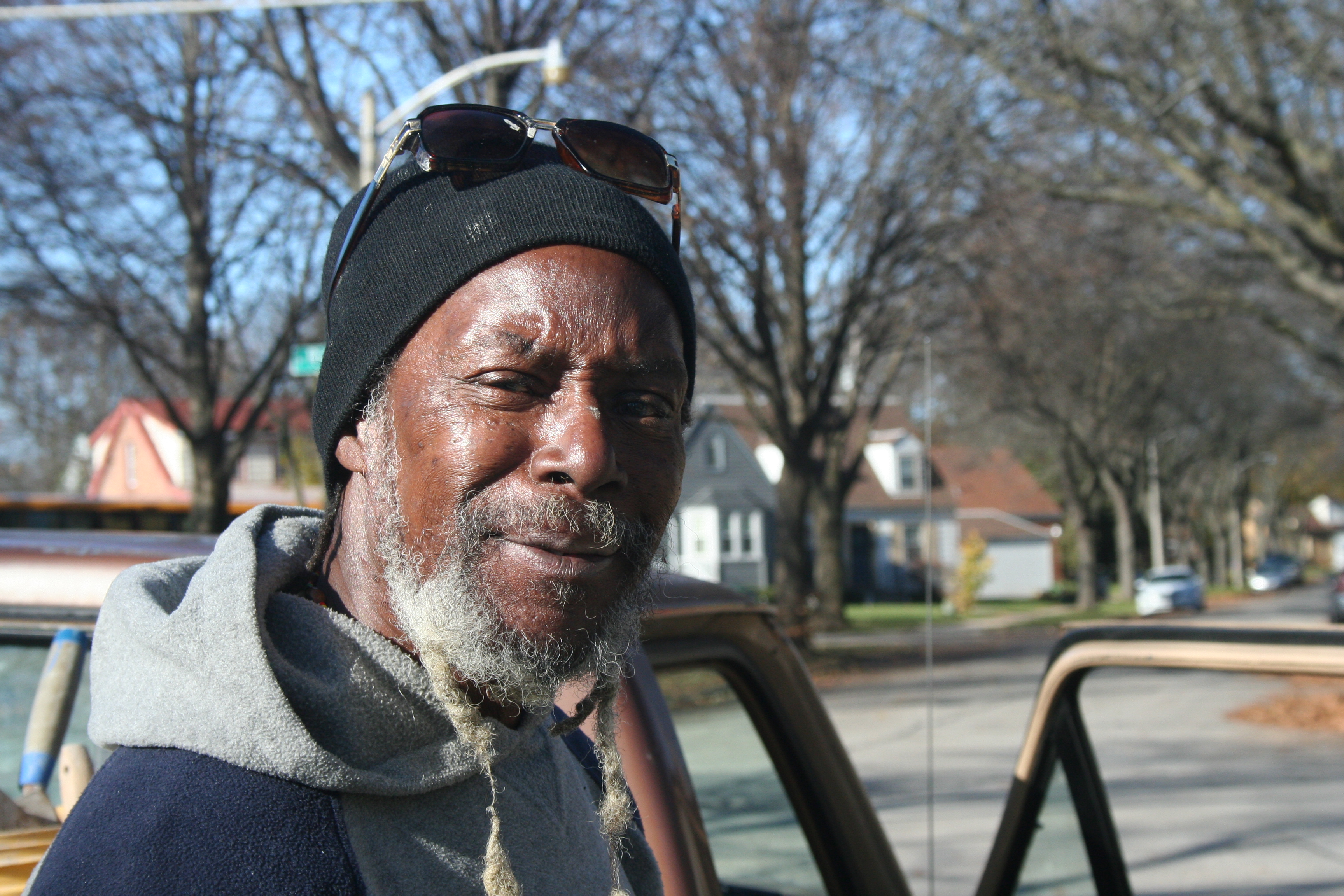 “We’re losing our future,” Rusty says, as he leans against his cream-colored pickup truck. “See, the youth are our future, right? And this is how we live forever, this is how our name stays in the book of life forever — through our kids, grandkids and so on, and so forth.

Green was born on a naval base in Pensacola, Florida, in the mid-1950s. Shortly thereafter, his parents decided to move to Milwaukee.

“It was supposed to have been better economic conditions — you know, jobs and all ‘a that,” he says. “I guess when you’re a child you don’t really know, right?”

They initially settled near 19th Place and Vine Street. “We were doin’ alright. I mean, hell, families were more united then, neighborhoods were more trusting and friendly, you know? You used to leave your doors open and stuff, be gone for a while; don’t have to lock your house, didn’t have to worry about no burglaries or break-ins — anything like that. That stuff didn’t start happening ‘till like the 70s.”

As the economic situation of individuals and families improved, people started wanting to have their own homes. Much of what is now the City of Milwaukee was just fields, then, he says, surveying the neighborhood around him. Russell recalls a thriving Black nightlife situated between Walnut and Burleigh streets. Life was good.

“People were a lot more open, outgoing, friendly, considerate, and it was nice.”

Socially, everyone knew everyone, according to Green. If you moved from one spot to another, the connections with former neighbors stayed, creating a strong network of relationships.

“It was real nice,” Rusty says. “Everybody had fruit trees in their yards, sometimes multiple fruit, different kinds of fruit — pears, apples, peaches, plums, cherries, things like that. Had their own garden, you know … being from the South, you’re used to gardening and stuff. And, then, um, jobs picked up, you know, people were making money, so, got to living a little better.”

Green is the second oldest of six, one of whom passed as an infant. As a child, he says he didn’t realize the value of education, though his parents stressed it. Even so, Rusty learned a lot about respect, family and community.

Eventually, though, his parents split up, and about six months before his 18th birthday Green found himself in jail for a burglary.

“Fell in with the wrong crowd,” he says. “At that time, when I was comin’ up … people wanted to dress better, drive nice cars — what they call livin’ the fast life — and, uh, you know, [I’m a] young kid, see a guy dressed real nice with jewelry and whatever, pocket full ‘a money, nice car, and he was an influence, right? That was my aspiration.”

“I was growing up under the wrong influence at that particular time, trying to live a fast life — a life that was too fast for me — and not knowing or understanding the consequences involved with that.”

Now, the 61-year-old says, he knows that life isn’t “about material possessions or anything like that.” But, as a teenager, that wasn’t something he was thinking about.

“You wanna be just like this guy or that girl or whatever, thinkin’ they have it good like that, not knowin’ what they are going through actually. You just see the exterior of their lives, so you were impressed by that.”

Eventually, after serving his time, Green fell in love with a young lady, and they had children together. He says he started to see more of the value in family.

“I wanted to be more responsible, more considerate, more empathetic toward my people — my friends, my family. It wasn’t just about color, but it started about color,” he says. “After I got into Rastafarianism, I saw it was more universal, more worldwide — it was more about comin’ together as a common people, you know?”

Unfortunately, that relationship didn’t last. “My manhood got in the way — my male ego got in the way,” Russell says, adding that he wishes it would have been different.

“But, you know, this is my journey. You know what I’m sayin’? No matter how much I wanted it to have been different, that’s my journey. Everyone has their own separate journey. So, all I can do is embrace it — right? — give him praise and glory. Hopefully, I’ve learned from it,” he says.

In the years since, he has continued to practice his faith. Even Rusty’s daily work — masonry and cementing, which he’s done for more than 25 years — is an aspect of his spiritual calling.

“See, work is a discipline,” he says. “Work is what you do to further yourself and those around you. Whether it’s building roads, homes, or what have you … It’s always about that next step, building on the positive, getting to a higher plane of understanding. But, your anchor is that you have to have love in your life all the time, keep love in your life, disregard hatred, prejudice, misunderstanding — because we all have misunderstandings.

“The secret is workin’ it out, talkin’ out, you know, and trying to understand what the other man is talking about, what he’s sayin’.”

His aim is simple: to be a positive role model and influence in the lives of others.

“Learning is a life-long journey,” says Green. “You’re never too old to learn [something] new, never too old to experience new things, you know, to appreciate life anew. That’s my goal … to learn something new every day, to reach out to somebody every day, tell them about how good god has been to me.”