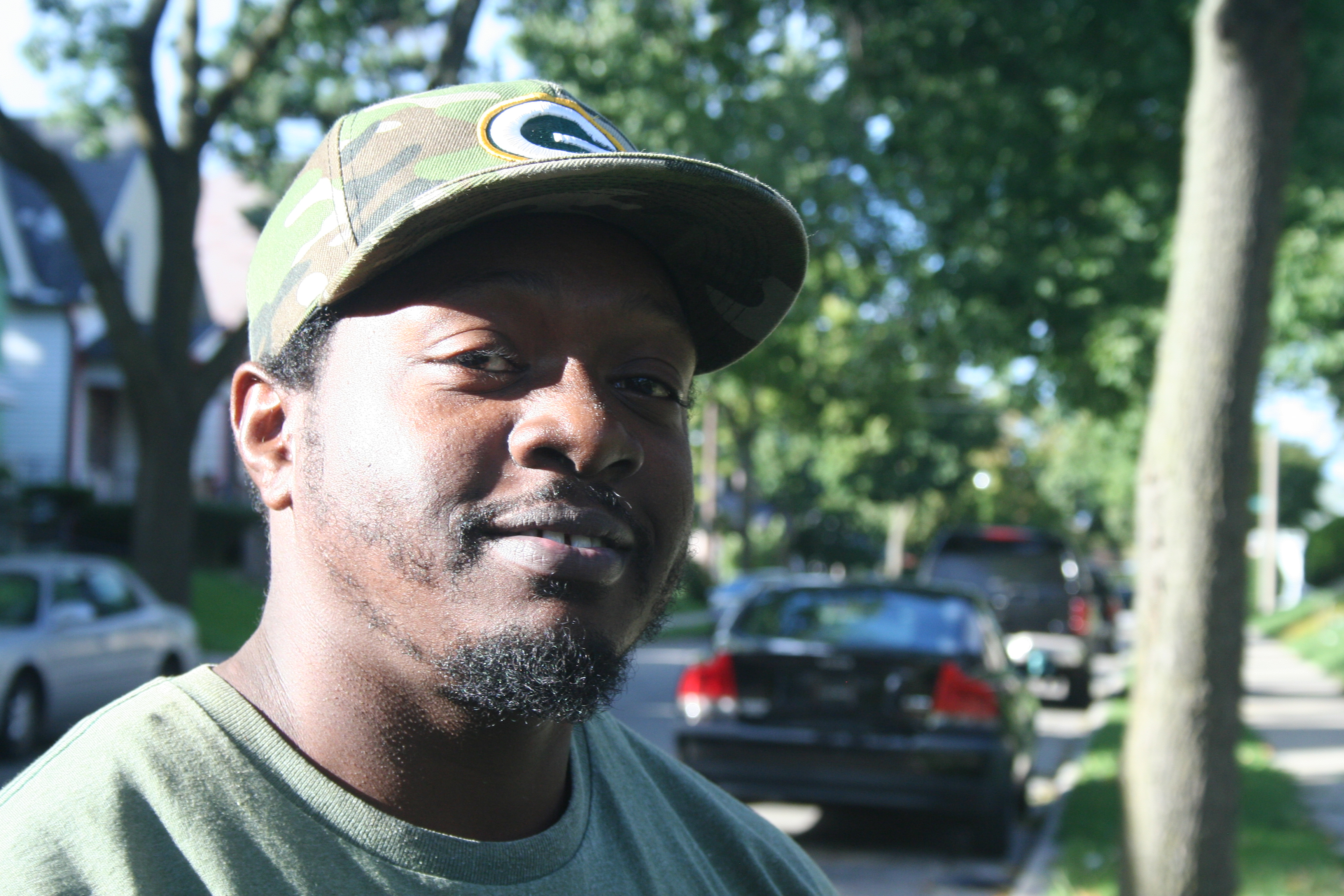 James King picks up trash from a strip of grass between the street and sidewalk on North 12th Street, an idle mower behind him. King, who grew up near 29th Street and Courtland Avenue, has always walked his own path, sought to define life by his own standards.

James received a lot of “tough love” from his father. Living where they did, it was common to see dope boys on the corner or a young woman walking the street. But there was always church and his father’s belt to remind him of the straight and narrow.

“Now that I look back … I used to get a whoopin’ a lot,” says King, who was the second youngest of six.

Because of this dynamic, James acted out, at school and at home. He was a self-professed class clown.

“That’s the number one time when my father showed me a whole lotta attention — when I got in trouble in school,” says King. “Yeah — that’s the only time where I got the attention, but it was the belt that gave it to me.”

“My father used to always tell me — and I believe it now — ‘You ain’t hurtin’ nobody but yourself … You wanna be a clown in school, tell the jokes? The teachers already got their degree; You’re only hurtin’ yourself.’ But, you know, didn’t realize it back then.”

After graduating in 2004, James started out as a security guard before deciding to take some college courses. But, when he got a high-paying job at We Energies with full benefits, that changed.

“Who needs school when you’ve got a good job?’ James says. “So, [I] stopped goin’ to school, started workin’ for We Energies. And then when I lost We Energies, it was [like] ‘Oh shit.’”

“When I lost that job, I thought it was gonna be the end,” says King of the position he held from age 19 to 25, disconnecting people’s lights. He says he was “the bad guy.”

“That was the best thing that [ever] happened to me.”

Around that same time, James was in the midst of a custody battle over his first child; his father had also fallen ill due to diabetes. He eventually died of congestive heart failure at the age of 56.

“It was sad, heartbreaking, all that,” says King of his father’s death. “I didn’t think he was gonna pass, so it was kind of … a surprise.”

“When you go to somebody’s funeral … when somebody pass, you always hear: ‘Is there something I can do? Just let me know — I’ll do it.’ And, when my father had passed, that was the worst thing that somebody could’a ever said, ‘cause it was like … ‘Can you bring my dad back? If you can’t bring my dad back, ain’t no need to ask that.’”

“I had all that stuff weighing in on me,” he says. “I ended up [starting to use] drugs, drinkin’, you know, doin’ just about everything to get over it. And, then, when my father finally passed, I just hit rock-bottom.”

King fell into a deep depression and even had thoughts of suicide. “Bein’ young, havin’ so much money, [I] don’t even know what to do with it, so … if I see somethin’ I’m just buyin’ it, buyin’ it, buyin’ it. But, when I lost that job, it was like, ‘What am I gonna do now?’ And, I had to go back to what I know — church.”

He says it was god that brought him out of that time of darkness. “The only thing that I did was submit to him — that’s the only thing I did.”

James realized there was something he had been withholding. “All god asks [is to] just return it to him and he’ll return unto you,” he says. “My pastor told me, ‘If you wanna test god and you’re lookin’ for something, whatever you have as a seed, plant it.’ Did that, and everything else went up.”

About four years ago, King started his own business doing janitorial and landscaping work. He also works with men who have been incarcerated.

There have been ups and downs along the way, he says; there have even been times he’s wanted to give up. While it’s given him freedom and flexibility, James says, being your own boss isn’t everything it’s made up to be. “I know everybody wants to have their own business and be their own boss. But … I realized, even when you have your own business … you’re still not your own boss, ‘cause you still work for somebody else. No matter how you look at it, you still work for somebody else.”

Though he loves cutting grass — it was the first job he ever had — James says what he really wants to do is dedicate his time to the church. “I really don’t want to do what I’m doin’ now,” he says. “And, if I was to [continue doing] it, I want to have a nonprofit and just find some way to help people.”

King has contemplated leaving Milwaukee altogether but asks, “for what?” “You know, no matter where I go, [there’ll] still be the same problems, same issues.”

Did you find value in James’ story? If so, please subscribe to our newsletter; we publish the story of a different Milwaukeean every week.