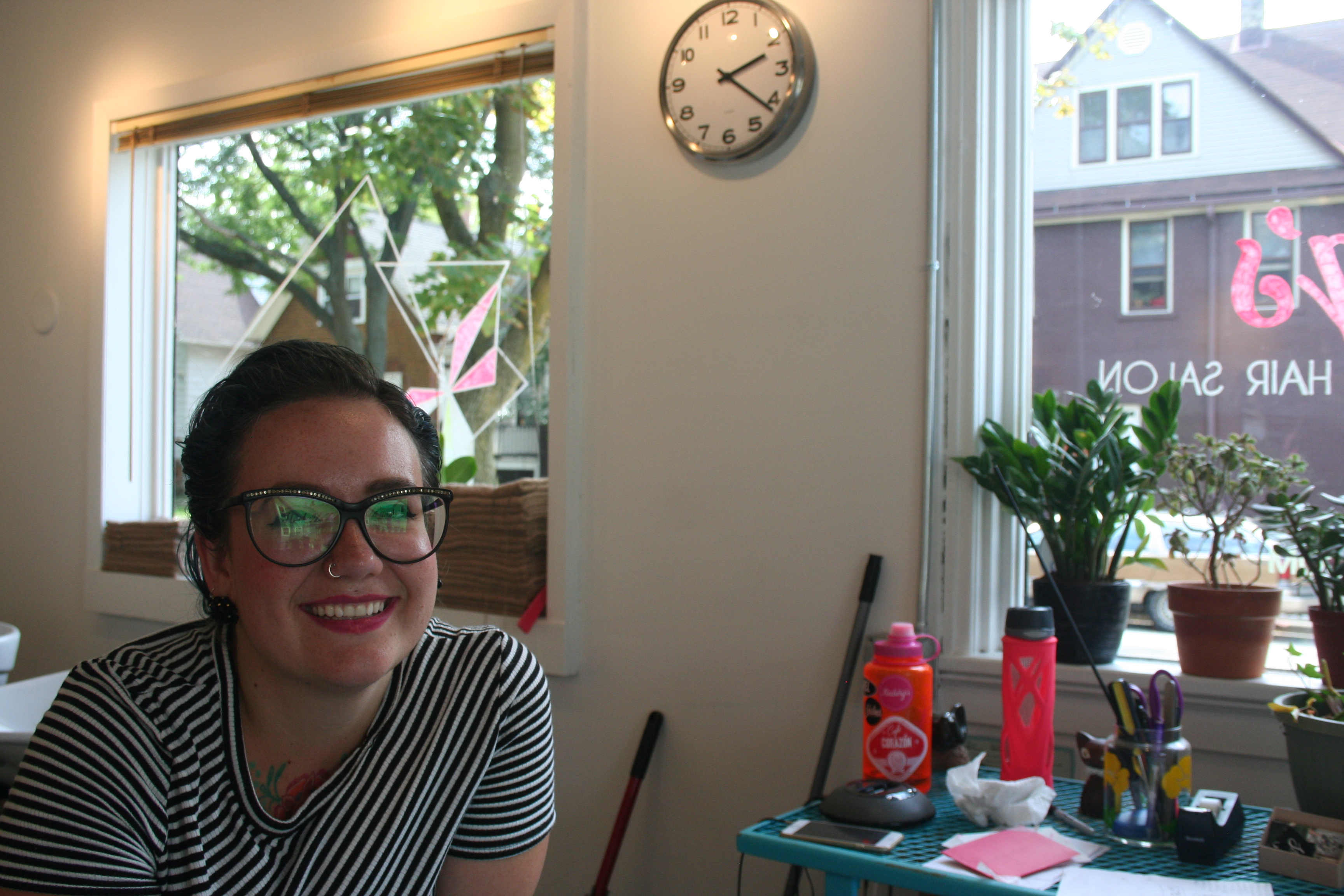 Vanessa Plant sits on a yellow, vintage sofa in the living room of her first-floor Riverwest apartment. Plant, whose multi-colored hair and bright, flowered chest tattoo give a bold first impression, has lived around the world but eventually came back to her childhood neighborhood to put down roots.

“I was born on Pierce Street, in a home,” she says. “Homeschool and church, those were my things. I mean, I was 6 so I don’t remember a ton — mostly just from old home videos.”

She recalls her parents “being intentional in the neighborhood and having people over and exchange students and just helping people.” When she was young, she says, her parents were called to become missionaries in the Middle East; they were also intentional about keeping their three children updated and involved in their plans to move. (Full disclosure: I have known Ms. Plant since she was a child. This interview was done in January 2015)

“I was almost seven and we packed up all our stuff into like six duffel bags and moved to Cairo, Egypt,” Vanessa says. “I was so excited. And it was so dirty, and it was so gross, but it was, like, so fun. I loved it.”

Plant’s mother is a singer; her father works in film. Both are currently in Jerusalem. “They’re both pretty artsy; super, super, super laid back. They have no plan — they have no agenda. They just, like, do whatever happens to them, which is awesome and annoying at the same time.”

They’re loving, unconditionally, and open to things that make them uncomfortable; They value culture, and don’t try to impose their own, she says. “They were very adamant about learning the language and, like, doing things that other Americans might not do.”

Plant says moving halfway around the world “didn’t feel that crazy at the time.”

She calls Egyptians “goofy,” “passionate” and says, for them, everything is an extreme. “They love to joke and laugh,” Vanessa says. “They feel things so strongly. If something’s funny, it’s freakin’ hilarious; if something makes them mad, they’re like pullin’ out their knives on the street ready to, like, kill someone.”

Some parts weren’t so easy, though. “Cairo is like a really big, dirty kind of crazy city,” she says. “It was, like, a really hard city to live in. I think, as a 7-year-old walking around the streets and having guys, like, call at me and grab me and whatever, that probably affected me more than I think.”

That aspect of the city affected her older sister even more, Plant says. “We were like best friends but she didn’t have a lot of friends,” Vanessa says. “She needed one best friend who, like, saw her and got her, and she just never had that, except for me. But … I think I wasn’t as good a friend to her as I should have been.”

“She told me recently that I never loved her the way that she needed to be loved, which is a really hard thing to hear,” says Plant. “She got married two and a half years ago and we haven’t talked since then, which sucks.”

At first, Vanessa and her siblings continued to homeschool. Then, they attended a number of small schools, ranging from seven to 36 students — all children from other missionary families. These small environments limited her ability to develop friendships, which was difficult, Plant says, especially after having so many friends in America.

Once she entered high school at a much larger k-12 school — there were 300 students in all — that changed. “That was the first time in my life that I’d had Egyptian friends. And, they were, like, my best friends,” she says.

Though everyone at the school spoke English, Plant’s understanding of Arabic had grown, as well, which helped. “I didn’t have to speak it (Arabic) very well, but I understood everything. So, if they were like joking or talking, I could participate, which was good, because I think, otherwise, it would’ve been really, really, really hard.”

“They were also some of my first non-christian friends, which was different,” she adds. “But, again, they have Islam, which was really, really, really important to them. So, it was still like, ‘Oh, you have your thing and I have my thing.’”

“Everybody was fascinated at each other’s (religion),” says Plant, adding that the experience opened her mind.

“I think everybody should have a time in their life where they’re, like, constantly busy. Because it makes you learn and it makes you appreciate being busy … And being not busy.”

Vanessa Plant sits in the living room of her Riverwest home. (Photo by Jabril Faraj)

In 2004, after about 10 years in Egypt, Vanessa’s family wasn’t able to get their tourist visas renewed. In less than a month, the family packed up and moved to Morocco. It was there that Vanessa graduated high school. After taking a year off of school to tutor, she and her brother returned to the States.

The two of them, who she says are “like best friends,” lived together for four and a half years in the same apartment — the place where she still lives. “I was 18, he was 17, which was crazy — living in America, trying to work, trying to be in school, trying to make money, trying to keep the house nice. Oh, my gosh. It was rough,” she says.

Though they had some help — both financial and otherwise — from family, Vanessa and her brother were mostly on their own.

“It was the worst time of my whole life. Baker’s Square sucks, dude — it freakin’ sucks,” she says of the first job she worked while in school.

She said it wasn’t “the idea of Baker’s Square” that was so bad, but the management — every time she worked, she was reprimanded for not doing something she didn’t know she needed to. Three months after starting, she quit. Plant later worked at City Hall. It was a tiring time in her life, she says.

“I was out of the house from, like, six in the morning until like 10 at night. And, I was so tired, and I just fell asleep everywhere. Oh my gosh, it was so exhausting.”

Despite that, Vanessa says the experience was a good one. “I think everybody should have a time in their life where they’re, like, constantly busy. Because it makes you learn and it makes you appreciate being busy … And being not busy.”

Vanessa Plant stands at the counter of her hair salon in Riverwest. (Photo by Jabril Faraj)

During that time, however, Vanessa was also able to follow her life-long dream of attending beauty school. Since the age of 11 she’d cut her father’s hair, a responsibility that slowly expanded to the rest of her family, friends and even some of her high school teachers.

“Practice makes perfect, and I practiced a lot,” she says. “If you’re about to cut somebody’s hair and you’re like, ‘I don’t know how to do this,’ you’re not going to do a very good job.”

While enrolled in a one-year program at MATC, Plant interned at the swanky Erik of Norway salon in downtown Milwaukee. At the time, she says, she wanted to be a “celebrity hair stylist,” but the experience helped her to realize “the reality of working in a high-end salon” was not her cup of tea.

Instead, the eclectically-styled Plant, found a job across the street at Beauty, another salon that has since moved from Milwaukee Street. She worked for the company, which also owns four Cutting Group locations, for five years in all.

She has come to think of her work as similar to sculpting; every cut is unique — like a work of art, in itself. “Everybody has different textures, and heads, and weird stuff that you have to just, kind of, work around.”

As Vanessa continued to hone her craft, recognition started to come with it. People would walk in asking specifically for her, which was gratifying, she says. “I love making people feel good. And I’ve had people say, ‘You make me so much more confident and I can, like, go through life differently because of my haircut,’ which is amazing.”

But it’s not just the haircut that helps. “Just like, the other day two people came over in the morning for haircuts and I hadn’t seen them in maybe like a month,” she says. “As soon as they sat down they were just like, ‘Okay, all of this stuff is happening to me — I’m having this fight with my mom, I’m doing all these things …” and I’m like, ‘Okay, I’m back in the therapy sessions.’”

Plant says she values the time with the people who come to see her, whether it’s just for a 30-minute haircut, or more. Some of her closest friends are clients, as well.

“The small moments too,” she adds.

“I also have a pretty good memory, which really helps because people will sit down and I’ll be like, ‘Oh, last time you were in here you were gonna do that thing, how’d that go?’ And, they’re like, ‘Oh, my gosh, you thought about me — you remember what I said to you?’ And that makes a really big difference.”

Plant says those interactions helps her to grow and practice building relationships, as well. “It just kind of, like, stretches you,” she says.

It isn’t a secret that Plant’s faith is important to her. It’s part of who she is and she doesn’t try to hide it.

At the same time, she isn’t going to hit you over the head with it. She’s well aware of the negative experiences or perceptions many people have had with others who profess her faith.

“I think a lot of people either have, like, really unfortunate misconceptions of Christians, or have had really bad experiences, or they just generalize,” she says. “I kind of like to be that person that’s like, ‘Oh, you’re not what I thought you were gonna be like.’ I like being that.”

And, being that has paid off for Plant, allowing her to develop a caring community around her, both in and out of church. That fact was on display as she began on the journey toward opening her own salon. Donations, financial and otherwise, poured in — much of the help came from clients at the time, but help came from her church community as well. She called the experience “humbling and weird” but “encouraging.”

“I’m like the luckiest, richest person in the world,” she says.

Plant’s life had been slightly unchanging since she moved back to the States. That changed quickly, and she hopes the change will keep coming. She’s excited to be working on something that’s hers, something in which she has ownership. The salon, Hedwig’s, is situated on Wright and Bremen streets, just blocks from her home.

When thinking about location, “The one and only thought was: it needs to be in Riverwest,” Vanessa says, a compliment to the community she’s found there. “I freakin’ love Riverwest — I’m so obsessed.”

“I don’t even know what’s gonna happen. That’s the most exciting part.”

“I know that I’m constantly growing as, like, a human and I feel like I’m gonna go through a lot more growth,” Vanessa says. “I know that this is gonna force me to grow a lot, which is scary, and also really exciting.”

Did you find value in Vanessa’s story? If so, please subscribe to our newsletter; we publish the story of a different Milwaukeean every week.