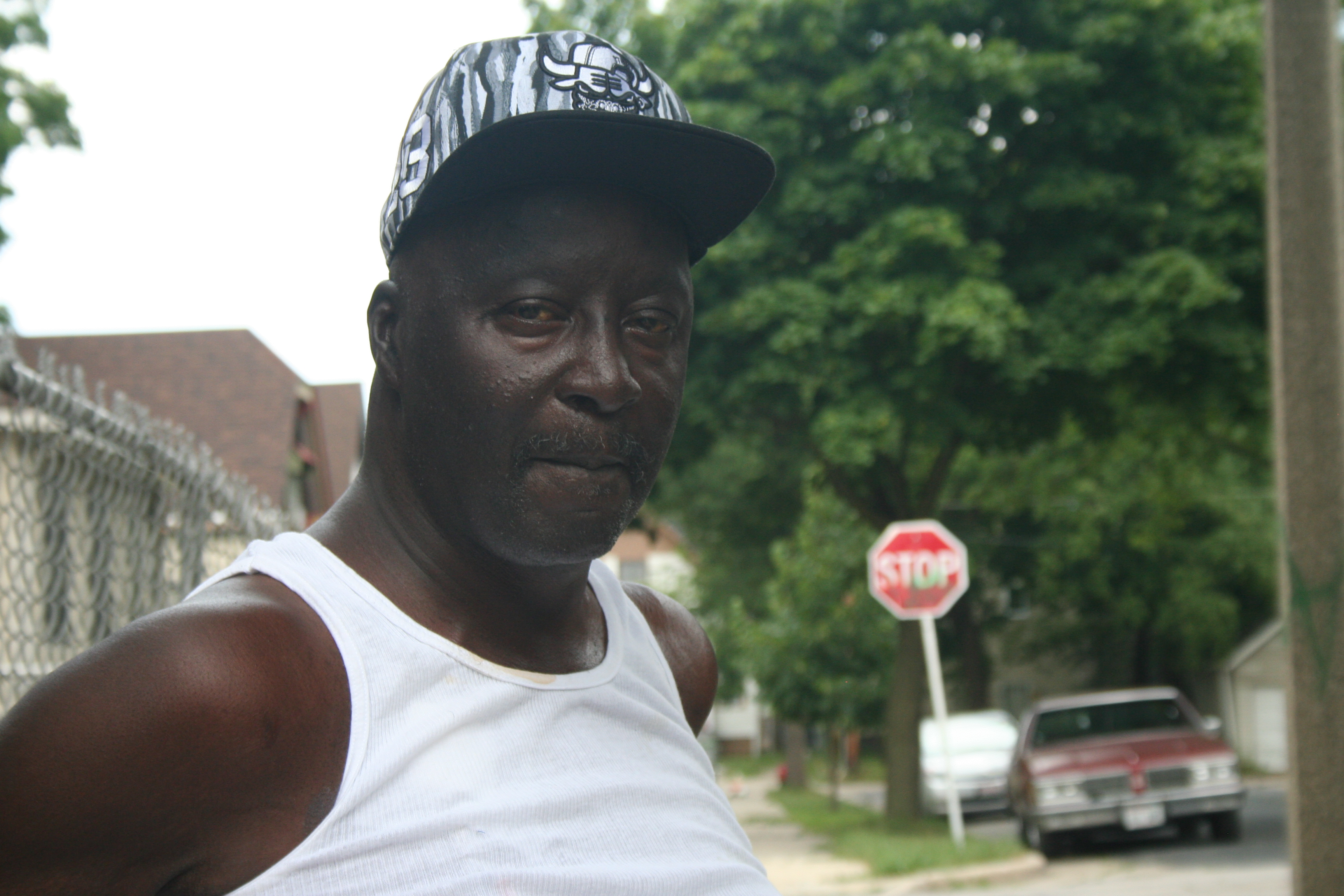 Michael Stephens sits in a wheelchair near the corner of Achilles and Auer streets in Milwaukee’s Harambee neighborhood. These days, Stephens doesn’t have either of his legs, but that doesn’t seem to trouble him, too much.

Stephens grew up in Chicago, which he called “real rough.” On top of it, he has seven sisters and four brothers. Michael, who was the sixth child — right about in the middle — refers to himself as the “black sheep.” He says he was always getting in trouble because he didn’t get very much attention.

“I was bad,” he says. “I was doin’ a lot of bad things growing up — settin’ school gyms on fire and pullin’ knives on teachers. So, the result of that was I got five years in a boys home.”

At the time, Stephens was 8 year old. He says the experience in the boys home was a good one. “I grew up there, got my mind right.”

He was still able to see his parents here and there. Michael got to visit home every once in awhile and his parents would make the trip to the home for Christmas-time productions. “I thought I was gonna be an actor,” Stephens says. “That’s what I wanted.”

“I was the best dancer. I was pretty good at acting. This one guy — his name is Charles — he was a little better than I was. We did Ali Baba and the 40 Thieves,” says Michael. “He was Ali Baba; I was a character called Jamil.”

Stephens says he wanted to make a career out of dancing and acting, but “it kind of fell apart” and he eventually lost interest. While in the boy’s home, though, he discovered another passion: English.

“That was my favorite subject,” he says. “Spelling, nouns, pronouns — I just liked it. I loved it, actually.”

School became a pleasure for Michael — well, that is, everything but social studies. While at DuSable High in Chicago, he discovered a love for Algebra, as well. He even made it on the honor roll a couple times. “I [was] just excited about school,” he says.

After he graduated, Stephens went into the service. Enlisting allowed him to travel all over the country, and even around the world. He did basic training in Missouri, spent time in Indiana and eventually found his way to Fort Ord in California. From there, he went to Germany and spent some time in Paris, as well.

“After the service, I came back here — that’s why I met Eddie,” says Michael, referring to his partner of 38 years.

He first worked at a fish market, then as a Certified Nurse’s Assistant (CNA). “After that, my love for bakin’ kicked in. I was a baker for a lot of years. I learned how to bake cakes, decorate ‘em, sell ‘em.”

Eventually, however, a diabetes diagnosis from back in his early 20s, while still in the service, caught up with Michael. “I didn’t understand diabetes; all I know is that I was to go to sick hall every day and take a thing called a sugar pill. So, I said okay. Then, when I got out, I kind of dismissed diabetes because I felt … so good.”

The doctor diagnosed Stephens, whose grandmother was also diabetic, with the disease. The doctor’s advice to Michael was to adopt healthier eating habits and exercise more.

The amputation was a result of gangrene, caused by the diabetes. “And the same thing happened to this leg,” he says, gesturing to the other. “The doctor told me this leg would be cut off in five years … he was right.”

Though Michael doesn’t have any children of his own, that doesn’t mean he doesn’t like them. “I love kids — I love kids,” he says.

Stephens has “a whole bunch of nieces and nephews.” He lived with his little sister for some time, as well, and helped her raise her kids. He also has a “gay daughter,” whose children he considers grandchildren. “They call me grandpa,” says Michael proudly.

His favorite thing, he says, is spoiling those he loves. What does love mean? “It all depends,” he says. “Love can hurt. Love can feel good … Love is spectacular.”

When Michael lost his legs, it was that love that helped him through the experience.

“Eddie was very supportive — he was there from day one,” Stephens says. “So, I felt like, as long as I had him and my family for support, hey, I could continue to live. I didn’t sulk about it — not one time did I sulk about it.”

Michael says his first thought, when he woke up in the hospital, was “to deal with it — not to be sad … about it, just to deal with it, go on with everyday life. And, that’s what I did.”

He says the most important thing he’s learned has been “to live; to respect; to continue to do the things that I love.”

“Just because you don’t have any legs that doesn’t stop you from livin’.”

Did you find value in Michael’s story? If so, please subscribe to our newsletter; we publish the story of a different Milwaukeean every week.