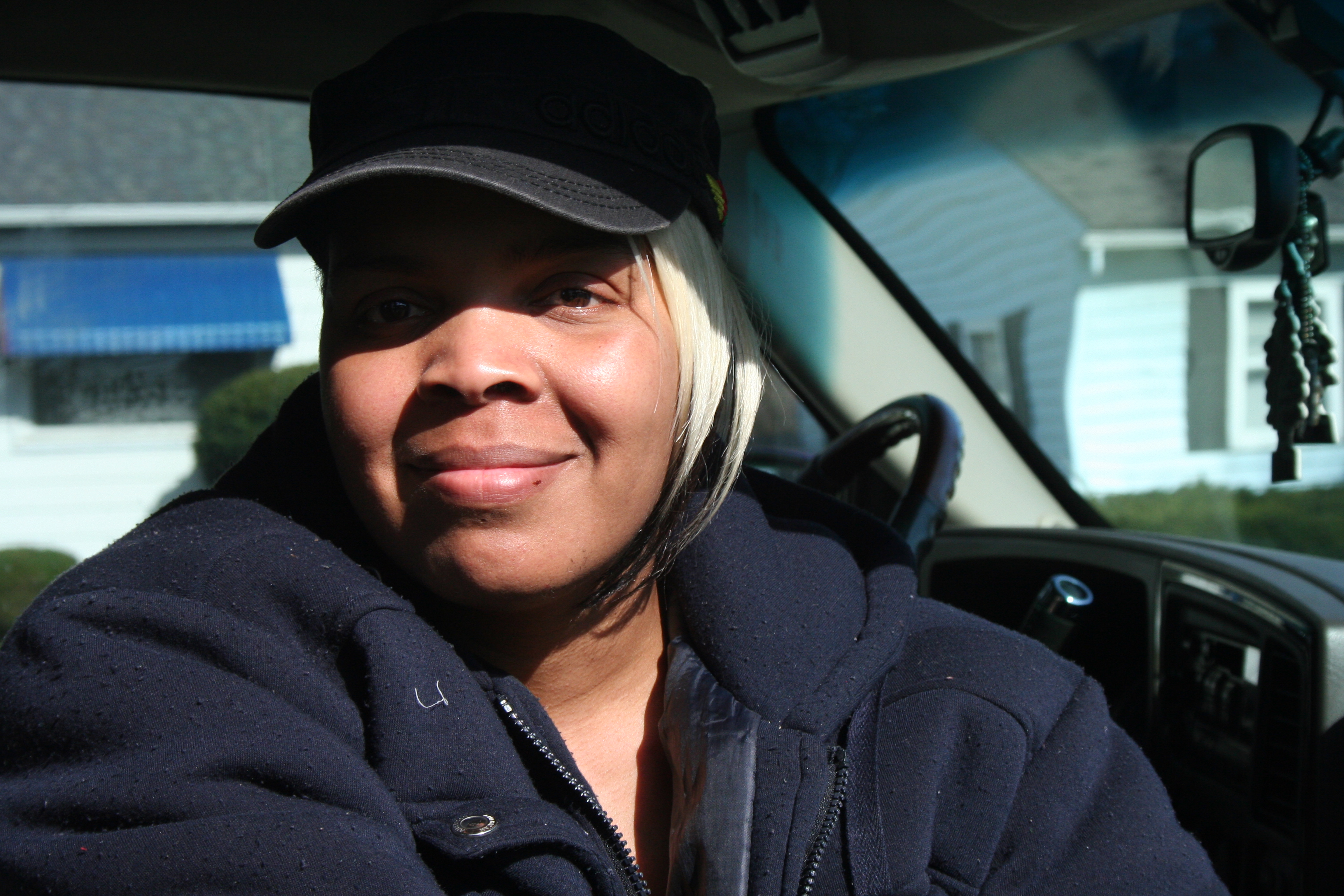 Helen LeFlore relaxes in the passenger seat of a large, red-colored truck on a quiet street in McGovern Park. The door sits open. Helen, who was born in Detroit, seems comfortable here — at home even.

“I’ve been in Milwaukee off and on all my life, due to the point my mom is here, my dad is there, so it’s been a back-and-forth thing,” she says. “Once I got old and was able to make my own decisions, I stayed here in Milwaukee with my mom, ‘cause there was more family here.”

“I can actually say, livin’ down the street from the park, it was beautiful, and [there] was life. There was a lot of life there, at one time.”

Helen describes her mom as loving, caring and someone with a “real big heart.” Though she says her father is a good man, he was also a ladies man. LeFlore’s parents split up when she was about 5 or 6.

“My dad was in love with my mom tremendously but it was an abusive relationship,” she says. “I think that all speaks for itself.”

Helen describes herself as a “tom boy” and says she loved to climb trees, climb buildings and to run — especially, to run.

“You know, sometimes, when you run … even if you’re not goin’ through nothin’, it’s just a point of makin’ it seem like you’re just free. You know what I’m sayin’? It’s the small things that make you sometimes feel freer than what you are,” LeFlore says.

She adds, “It’s hard to explain — it depends on the life that you have, the situations that you go through.”

“When I was there, when I was younger, it was very nice,” Helen says of Detroit. “But, as the years went by, and you get older, of course, as you notice … it’s one of the poorest places now.”

LeFlore said she went between Milwaukee and Detroit a lot. She says, after a while, it was a little much, especially as a young child. “You know, it’s like you realize you made friends, just to lose friends, just to make new friends,” she says. “And the experience of travelin’ is always fun. But, as far as meeting new people, every time you turn around … you make best friends and then you have to lose ‘em ‘cause you don’t know when you’re coming back, and if they’re gonna be there when you do come back.”

Besides that, she doesn’t remember much else, at this point — at least none of the bad stuff.

“As time progress[es], you know, you learn to forgive,” she says.

Helen says she’s found peace within herself and she’s found a way to regain that peace whenever life gets hard. “I talk to a counselor; if I can’t talk to a counselor, I write poetry,” she says. “If I feel like life is too hard or gets to difficult, you know, there’s just a point you have to find yourself … within yourself.”

She says doing those things helps her to relax. For LeFlore, part of finding and maintaining that peace has been learning to forgive and let go. “You can’t be happy unless you learn to forgive,” she says. “Sometimes it’s best to say sorry in spite of, because you never know what that person went through or how they were raised, even if it’s a parent.”

She says apologizing, offering and asking for forgiveness is a healing act in itself. “It builds the relationship,” Helen says. “A lot of times, it builds it. Not only that but it also stops a lot of violence.”

You’ll also never be left wondering. “You don’t know if that person is gonna pass away and then … you have this thing of guilt in your heart wondering, ‘Well, you know, when I had the opportunity I shoulda did this,’” she says. “So, why hold on to anything in life … when you can make a change within yourself?”

LeFlore, herself, has four children — two boys and two girls, between 5 and 15. She was a foster parent before she had her own kids but says she wasn’t ready for them to start growing up. “It’s challenging. It’s real challenging. I’d be lyin’ if I said it’s not.”

“I can’t even begin to tell you. Each year, you know … if I [could] keep my kids locked up where I didn’t have to sit here and tell my kids, you know, ‘prepare yourself for this world,’ I would,” she jokes. “But, then, I understand, too, they have to deal with the challenges of life on their own and learn.”

Even though it took a few months for her to find out about her 15-year-old son’s girlfriend, she says her and her kids have a good relationship.

“I mean, they got their moments where they wanna challenge me or try to tell me certain things to do, or whatever the case may be. But, when it all boils down, me and my kids are real close and I’m blessed for that.”

LeFlore has previously worked on houses. Currently, the 43-year-old is finishing up her GED and says she wants to open her own carpentry business. Well, that or be a child psychiatrist.

Right now, though, she’s just taking care of her kids.

“Somethin’ happened in daycare that it shouldn’t have … and I made a threat in front of the police — police told me to go see counselin’,” says Helen. “And, when I see counselin’, they were like, here, here go a check … sign right here, we’ll make it where you can raise your kids and watch over you kids.”

LeFlore receives aid from the state. She says if she needs any extra money, she knows how to go out and get a job. But she views what happened as a blessing in disguise.

She appreciates that she can be there for her kids. “A lot ‘a parents, or a lot ‘a people in today’s society, they don’t watch their kids — they don’t even interact with their kids,” She says. “They don’t wanna be around their kids, they quick to [loan] they kids to someone else, you know? … It’s sad.”

“I just feel like me watchin’ over my kids, I know for a fact they will live a longer life in so many ways. I can’t say what they’ll do outside my eyesight, but, at least, when they leave my presence, I can hear people sayin’, ‘Hey, you raised your kids real well.’ So, that’s reward within itself.”

LeFlore says she’s still in Milwaukee because of her mom, and that she doesn’t have plans to leave any time soon. Besides that, though, she says when there isn’t anything left for her here, she may think about moving on. Whether she’s in carpentry, or, perhaps, decides to return to being a foster parent, it seems Helen will always be in the business of building.

Did you find value in Helen’s story? If so, please subscribe to our newsletter; we publish the story of a different Milwaukeean every week.