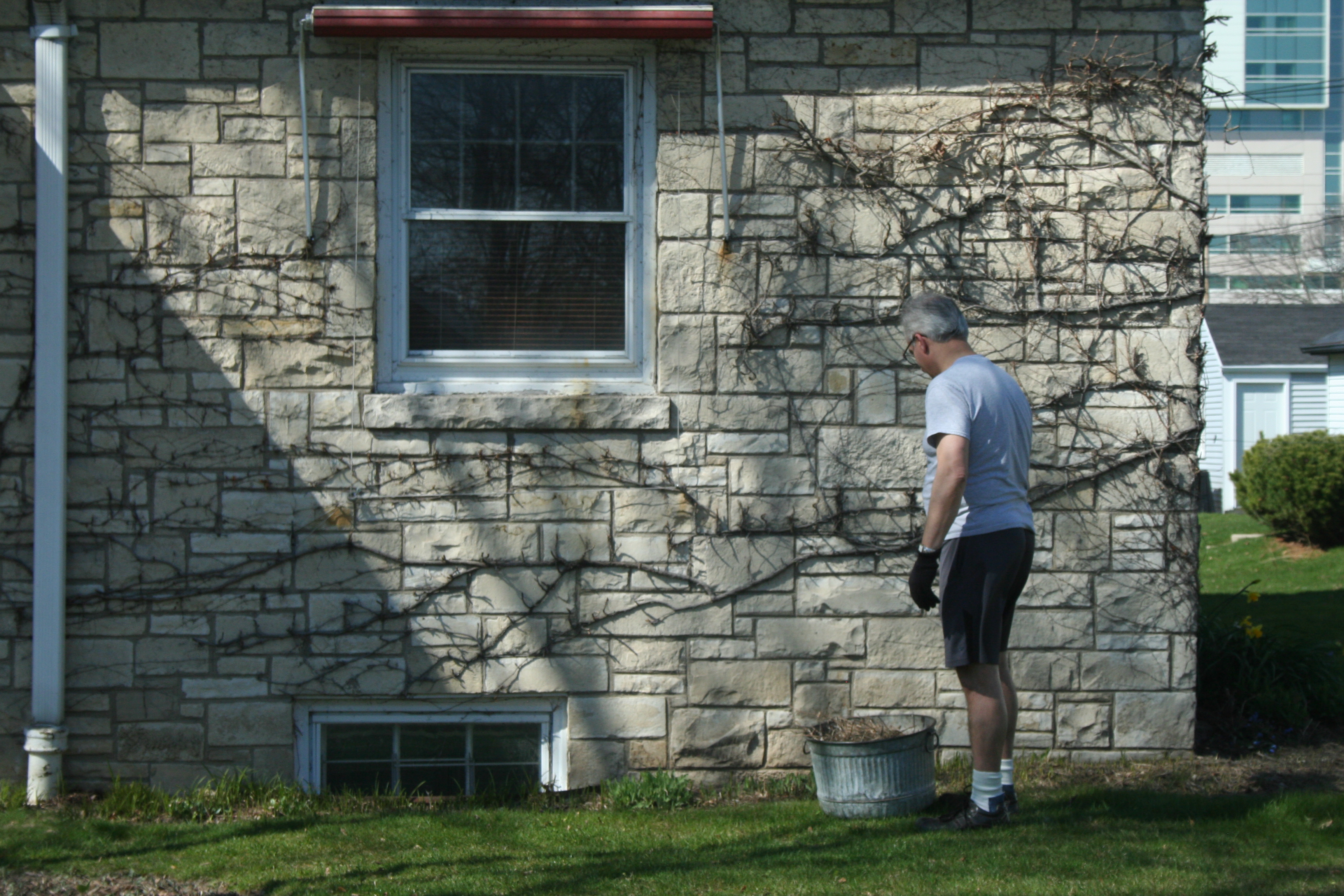 Brian crouches in his yard, gloves on, peering through his glasses at the undesirables inhabiting the small strip of dirt that surrounds his house in Southgate; a basket of already liberated weeds and brush sit next to him on the ground. As of this mid-Spring day, no flowers have bloomed yet.

Brian has lived in the Milwaukee area for almost 40 years, but he was born and grew up in Sheboygan Falls, Wisconsin.

“Good place, like any small town, to raise a family,” he says. “But, uh … I’m glad I don’t live there anymore because there’s a lot of — at least when I grew up — there was a lot of prejudiced people.”

Brian attended a Catholic grade school there. He said it was very strict, even somewhat more than strict. “Frankly, there was abuse from the nuns — verbal and physical abuse,” he says.

He calls it abuse confidently now. But Brian says, back then, it wasn’t something that he was necessarily aware of, and didn’t complain about.

“I didn’t realize it at the time. I just thought—I mean, it was freakin’ me out but I never went and told my parents ‘cause back then … it was kind of like they (the nuns) were in charge.”

Grade school wasn’t all bad, either, he says. Still, he ended up at a public high school — there wasn’t a Catholic high school in town. It was then that things got worse for Brian, whose family was the only Italian one in town. “The high school, actually, is where the abuse got worse — verbal abuse,” he says. “It was relentless.”

The harassment happened daily, he says. “I was a lot more dark-skinned than I am now,” Brian says. “Yeah, that’s all it was, I think. Everyone else there is, you know, German, Polish — mainly Germans.”

“It never got physical. It probably should’ve gotten physical but I was just too intimidated. But, you know, just all the, uh—all the nasty words. You know, like ‘wop’ and, um, ‘spic’ and ‘ni**er’ and all ‘a that — just all of it — daily. And, sometimes, right in the classroom. There would be someone sittin’ behind me and, when the teacher wasn’t lookin’, they’d whisper it in my ear, you know, from behind.”

He says the constant antagonizing gave him a thick skin. “I mean, I wish it had never happened … But it did happen and, in some odd way, it made me tougher.”

Brian, who’s 61, says he even got an apology from one of the main perpetrators about 20 years ago. He says the passage of time, and growing up may have helped the guy come along. “I think [he] probably just came to realize how wrong it was,” says Brian. “I think that’s all it was — I think he just grew up.”

Unfortunately, high school wasn’t the last bit of adversity that would touch Brian’s life. Shortly after he turned 18, his father passed away from cancer.

“It was really difficult,” he says. “It was real difficult to see him die the way he died.”

“He was, like, at home for a good six months or longer, in the end, ‘cause they said there was nothing they could do for him. They were just pumpin’ him full of pain pills but … it seemed like they didn’t even work. It was six months of screaming and pain.”

By the end, his father couldn’t even talk. Though it was hard to watch, Brian says he learned something in this instance, as well. “I think in some ways it made me tougher than I already was. He really fought hard. I guess I learned perseverance from that,” he says.

Soon after, though, Brian found an alternative to perseverance. After high school he ended up working in a factory in town. But after about a year and a half he couldn’t take it anymore.

“I was so miserable working in a factory — just miserable, where I almost had a nervous breakdown and I just, you know, couldn’t take it anymore,” he says. “I thought, ‘I’ve gotta find some way to get outta this and do something else.’ And, one day, in the local newspaper, there was a full-page ad, or write-up, about a new program at the technical institute up there in Cleveland, Wisconsin, that’s just outside Sheboygan. I read it, and I thought, ‘I’m gonna do this; I’m gonna try this. Even if it doesn’t work out, it’s gonna give me a break from this craziness,’ you know?”

It did work out, and shortly after school was out he had a job in Milwaukee making eyeglasses. “I just got lucky. I mean, I ended up really liking it,” Brian says. “So, that’s what I’ve been doin’ for 42 years.”

Brian doesn’t have any children of his own; he was married once but they divorced about 20 years ago. He’s poured himself into his work; he enjoys interacting with people and actually making the glasses, both of which he does on a daily basis. Still, Brian, who says he works a lot, is looking forward to going from full-time to part-time work in a few years.

“That’s the number one thing; just looking forward to that. Yeah, some relief.”

Did you find value in Brian’s story? If so, please subscribe to our newsletter; we publish the story of a different Milwaukeean every week.