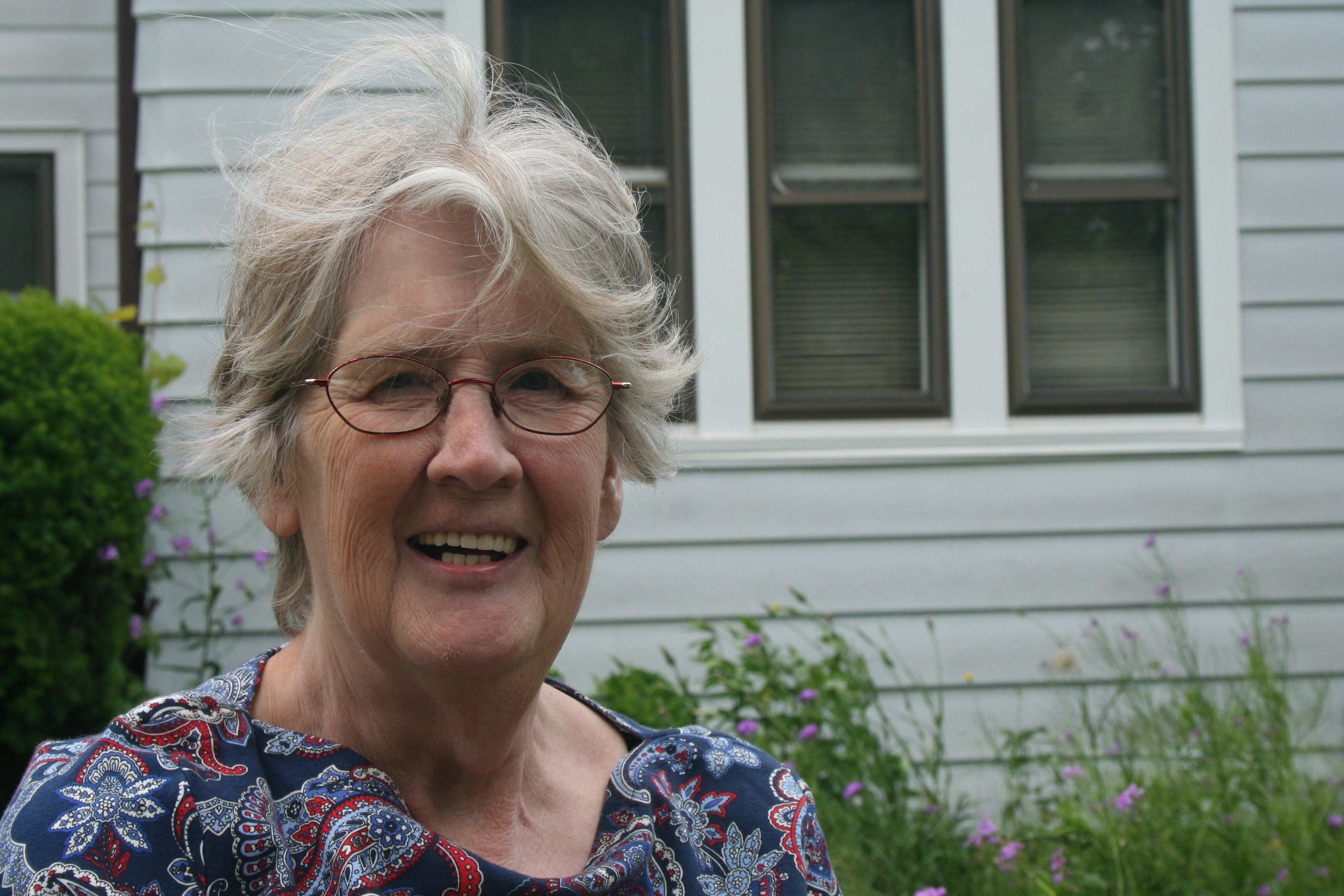 Bonnie Drew bends over to extract a weed from her garden, which covers almost the entire yard of her home in Enderis Park. Though, long ago, Drew picked up and left the northern Wisconsin town she was born in, there are still elements of that life she hasn’t been able to leave behind.

“It was completely different,” she says. “I mean, it was a small community so, you know … everybody helped each other out. You don’t see that too much anymore.”

Bonnie, who grew up on a farm, calls her childhood “care-free.”

“I had a nice childhood there,” she says. “We rode horses, played baseball, caught lightning bugs at night.”

And, when “hay time” — the time at the end of summer when they had to cut hay for the livestock and silos — would come everyone would come together to help. “Different farms would all come … I remember my mom cooking for, oh, maybe 20 people in the evening and stuff, you know. But it was just—that was just all a big part of it.”

Drew says her mother didn’t work outside of the house until all the children were gone. Until then, her role was as the house-maker. “That was just the way it was,” says Bonnie. “I guess, at that point, it was maybe, what you would say, the ‘traditional’ role of the mother [was].”

Bonnie’s dad was “a real outdoors-person” who enjoyed hunting and viewed conservation as important. Drew says she wasn’t a big hunter, but that didn’t stop the rest of her siblings from going that way.

“My one brother and one sister … they followed the tradition of what my dad wanted,” she says. “I lived there until I was about 17, and then I moved to Washington D.C.”

“I’ve gotta admit, I do like living in the city,” she says, adding, “I guess there’s just always something going on.”

Drew lived in Washington D.C. for a few years, while working for the FBI. But, before too long, she decided to come back to Wisconsin.

“I was a little homesick,” she says. “I would never trade my time that I lived in Washington, but, at the same time, I guess I kind of wanted to be near … my family, too.”

Bonnie’s sister was in Milwaukee at the time, so she decided to stay. She met her husband, who grew up in Milwaukee, a couple years later. Drew made a home in the city and settled down, to an extent. But she still maintains a link to her childhood.

“I still have a place up north but I don’t think I could live there,” says Drew. “My house up north, it’s in a very remote area — it’s all wooded and there’s no houses around it.”

“When I do go back up north and stuff, living on a busy street like this, it takes me a couple days just to get used to not hearing sirens or buses going by.”

Though maintaining two homes is hard, it’s something that’s important to her. “My grandparents built the house. And, then, my parents lived there at one time. And, after my father passed away, then my mom lived there,” says Drew. “She ran into a problem of Parkinson’s Disease and Alzheimer’s, so she had to leave. It’s always meant an awful lot to my family.”

Bonnie says her mother’s descent was hard to watch. “It was very devastating. My mother … she liked working with people. She would volunteer a lot of times at the nursing homes and stuff for bingo, or she always picked up people that needed a ride to church.”

“It happened fairly quick. It was just something that, you know, it happened and we always thought that it would be a situation where it might turn around or something and it just progressively got worse to the point of where she finally just ended up in a nursing home, and that’s where she passed away.”

“You wonder,” she says. “I mean, not to say that my mother was a wealthy person, by any means, but she was somewhat comfortable I guess you would say. And, within a matter of — oh, I would say — maybe six to eight months, everything was gone, you know? I mean, basically, by that time, she had put the house in my name and stuff … but any financial investments that she had, everything was gone.”

By that time, Drew and her husband had started a family — they had three daughters. One is a new producer in Florida, another lives in Philadelphia and is just starting a family; the third is in Milwaukee.

She adds, “I certainly didn’t balk at the idea,” of them going off to pursue their lives. “I guess part of that comes back to me a little bit.”

But Bonnie, herself, never truly got too far away — she couldn’t resist the pull of home. “My mother and dad were both very into … family,” she says. “You know, as much as a lot of people don’t like to admit it … most of the time, your family’s always there for you.”

That was especially the case for Drew when her husband died in 1998, after being diagnosed with Multiple Myeloma. That year, they would’ve been married 25 years.

With the technology of today, though, she says it’s easier and easier to keep in touch with those you care about. Her kids got to see their grandparents a couple times a year, she used to talk on the phone with her parents maybe once a week; now, Bonnie says she FaceTimes with her daughter in Philadelphia every day.

“We try to stay in communication. And, you know, when things happen … you’re there to be a helping hand,” says Drew, adding, “You’re happy for ‘em when great things happen.”

These days, Bonnie gardens a little bit more than she would like — “The weeds kind of take over,” she says. But she still enjoys it; her mother was a big gardener and she appreciates the periodic compliments from passersby.

She laughs. Beside her garden, Bonnie’s just looking forward to seeing how her children and grandchildren adapt to life, and seeing a little more of the world, herself — experiencing what she can in the time she has left.

“I guess just kind of watch[ing] them grow,” she says of her offspring. “I’m planning another cruise in December. So, I don’t know. I’ll just, you know, see what life brings. There’s always something going on.”

Did you find value in Bonnie’s story? If so, please subscribe to our newsletter; we publish the story of a different Milwaukeean every week.