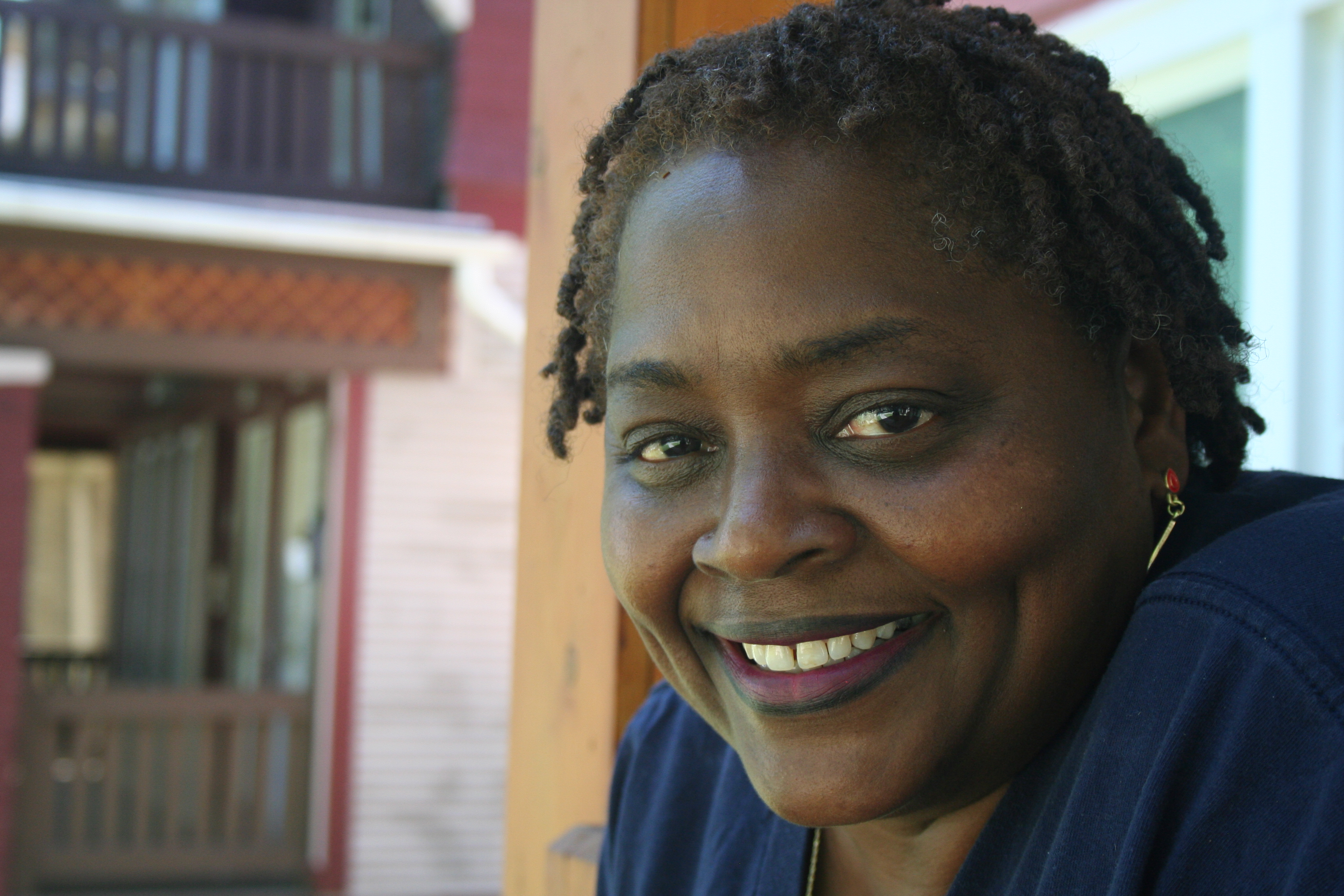 Peaches Ellis leans against a railing of her porch in Sherman Park. The 49-year-old wears a wide smile; her bellowing laugh can be heard early and often, in between sentences, up and down a sunny 41st Street.

“It was beautiful, it really was,” says Ellis of growing up in Milwaukee. “That was a long time ago. But it was beautiful because it was more peaceful, everybody got along, everybody helped one another.”

Peaches lived at 3400 N. 1st St. as a child and walked to school at Victor Berger Elementary only a few blocks away. “Everybody in the neighborhood knew everybody,” she says.

Then again, her family was much of the neighborhood. There were twelve in all. Even so, she doesn’t remember much conflict, if any.

“Our parents only taught us love,” says Ellis. “That’s all I know, is love.”

“We didn’t fight each other, we never called each other names — all that stuff wasn’t allowed.”

Well, there was that one time. “There was one story I could remember, and I was little,” she says. “My three brothers start fightin’. My daddy let all three of ‘em go in the basement and have their fight. They came up them stairs, all three of ‘em got they butt whooped.”

“When they came up them stairs, I remember my daddy tellin’ us, ‘Don’t never hit your brother or sister. [There’s] enough out in this world that they gotta deal with.’ And we never did — we never had no more fights, no nothin’. We never did that no more.”

Peaches calls her school experience “wonderful.” She says her parents emphasized hard work from the beginning. “Our daddy taught us that … you come in the house, you do your homework, then you can do whatever you want to do — you can go outside, anything. But, when you first came in, you had to do that homework.”

Her favorite subject was math, and she was an athlete, too. She ran track and even took the old Maryland Avenue school to the statewide volleyball tournament in middle school, where the team won first place.

Ellis attended Juneau for one year and Hamilton for a couple but didn’t play any sports in high school.

“I dropped out and got pregnant,” she says.

Soon after, she realized that her life would never be the same. “I changed,” Peaches says. “I became a different person, because my life wasn’t mine anymore — it belonged to these children. I’m the one [who] did it, you know? I couldn’t blame nobody else.”

“I had to stop bein’ wild and bein’ bad and grow up, because now I gotta teach these kids how to do somethin’, and if you … expect respect, you have to give it.”

That went for the father, as well, even though they weren’t together. “They father got the utmost respect. Anything they did, anything they, you know, accomplished, anything they was gettin’ ready to do — graduations, anything — oh, I called him, gave him the dates — anything. It was your choice if you wanted to go or not.”

“What better way to let them know where they got these genes from? It’s by lettin’ ‘em deal with that other side of the family.”

“You have to be an example for your children,” says Ellis. “They learnin’ from you. People don’t really realize how much they children watch ‘em.”

Ellis, who has three children did her best to set a good example, making sure they had hot breakfasts to eat, directing Saturday morning cleaning, setting aside time to spend together and, of course, working, and working hard.

Peaches started working at a young age, she says, helping to sweep alleys and clean parks with the Commandos, a civil rights era organization that offered a summer jobs program. Later on, she worked at McDonald’s for a time, was a summer youth counselor at the Salvation Army, drove a school bus and worked as a middle school cook.

Eventually, Ellis got her GED; today, she’s a CNA (Certified Nursing Assistant) doing home care for the elderly and disabled.

“How am I [gonna] teach the kids if I ain’t no example?” she asks rhetorically. “You make a mistake, you’ve gotta make up for it. Can’t let the mistake beat ya — don’t do that.”

Now that her kids are grown — the youngest is 27 — she can appreciate the effort she put in. “It makes you proud to sit back and see what your children do, and to hear other people say, ‘You know, you got some respectable kids.’”

But, for Ellis, it’s not about her. She says she’s most grateful for “the ability and the strength that god gave me to help people.”

“It makes me happy every day,” she says.

These days, many of those who were close to Peaches are no longer around, though. She lost both of her parents to heart attacks, a brother to AIDS, a sister to sickle-cell disease and another brother to an aneurysm. Yet another sister of hers is still living, post-aneurysm.

“It’s tough,” she says, adding, “This is god’s earth; I can’t control what he does. It don’t stop my emotions from runnin’, and it does hurt, you know, because the ones he did take back were mine, [some] of my favorite ones.”

“What it really does is just make you continue to help others — that’s all it does, and I love it.”

And, Peaches’ family is a bit bigger than simply those immediate to her. There’s the elderly woman at church, a couple who she used to help take care of, her cousin in Mequon whose husband has had two strokes, and one of her cousins who lives in a group home.

She says it’s important to have those people who are friends, but feel like family “just so that these people can understand that [there] is still kind people in the world — it’s not just all this violence and everything that’s goin’ on.”

Her next journey, Ellis says, is buying a home. She wants to get a four-family, and she wants to use it to keep on helping.

“Some people got to still be kind in this world. We can’t all be bad — it can’t happen. And I ain’t gonna let it happen,” she says with another laugh.

Did you find value in Peaches’ story? If so, please subscribe to our newsletter; we publish the story of a different Milwaukeean every week.