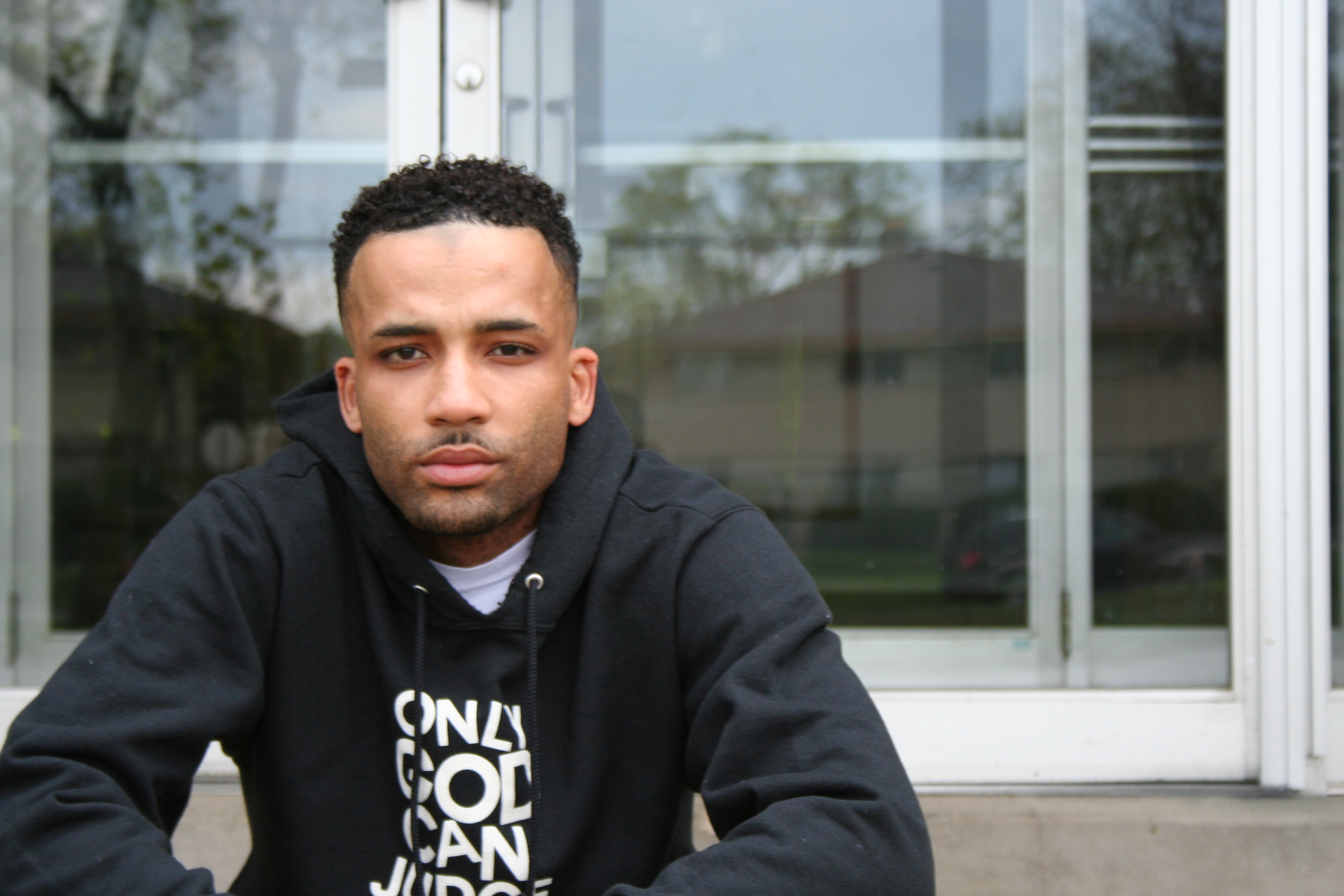 Jamahl Turner sits in the attic of a towering duplex on 57th and Lloyd in Washington Heights. The large, open area has been transformed into what doubles as a recording studio and bona fide hangout spot.

Turner — known by many as “Pharaoh Mac,” “King Pharaoh,” or simply, “Pharaoh” — is one half of local hip-hop group Pharaoh Mac & DMT. For him, music, and hip-hop in particular, is a way to express himself, an escape, a way to communicate on a deeper level, to be truly heard.

“If you think about it, music … is a universal language,” he says. “How you speak and what you speak of is what people can relate to. And, hip-hop, in a sense has become the more dominant music now. Everybody listens to it so everybody can relate.”

Turner was born in Miami, Fla., later moved to Chicago, Ill., and eventually ended up in Pittsburgh before landing in Milwaukee at the age of 15. “Busy — always on the move, never one place,” he says, describing his childhood. (Full disclosure: I have known Mr. Turner for about 10 years.)

His father — who he calls a “very determined, motivated individual” — was a highly-sought-after sales manager for radio and TV stations, which is why they’d moved so much. But when Turner was in high school, everything changed.

“Mom and pops split and I moved out here to live with my mother and my little sister,” says Jamahl. “My father said, ‘If anything happens, you need to watch over your mother and your little sister.’ I followed suit.”

Turner says he still talks regularly with his father, who moved to southern Texas after the breakup. He takes after him, too.

“If you were to look at our high school pictures, you couldn’t tell the difference,” he says.

Jamahl can see some of both parents in how he turned out — he describes his mother, who is highly educated, as “free-spirited,” “open-hearted” and “lovable.”

“All my artistic talents … they come from my mother’s side of the family. My stubborn, business … always lookin’ at opportunities in terms of an honest hustle — legit hustle — definitely comin’ from my father’s side,” he says. “Mixin’ the two together, I guess that’s why I’m in the position I’m in now — never satisfied, always gotta get better.”

Turner finished high school at the Wisconsin Conservatory of Lifelong Learning, an MPS school. Afterward, he enrolled at MATC to pursue a major in Mechanical Engineering; later, he switched to a double-major in broadcast journalism and TV and video production. But, again, Jamahl’s life was about to take a major turn.

“That’s when my oldest son came along,” he says. “So, I had to drop out and go work full-time.”

He had just turned 24. “We were engaged at the time … Funny thing is, I knew when she was [pregnant] before she did.”

Turner, who takes being a father to heart, says his favorite part of being a dad is watching his two boys develop their own personalities. “Like, watchin’ my oldest be the goofball, bouncin’ all around, always joyful, always curious while the littlest one is the most quiet, always up to somethin’ but always, like, three steps ahead of you.”

The road with his children’s mother hasn’t been quite so smooth. Turner says differences is their family upbringing and mindset got between them. Though they tried tirelessly, the relationship just didn’t work out.

“[When] you’re tryin’ to bring two separate worlds together that have been spinnin’ at 90 miles per hour, you can’t expect it to be a smooth transition — it’s gonna be rough,” he says. “It’s gonna be extremely rough. And, we were expecting it to be that perfect picture that everybody puts in their Facebook timelines, you know. No — there’s pain behind it.”

He adds, “You can’t force anything.”

“In order to survive, you’ve got to live with regrets. ‘Cause if you didn’t have any regrets, you wouldn’t have learned nothin’ in the first place. So, in the long-run, you realize that you truly never did have a regret about anything, which is the beautiful thing about it.”

So, Turner put school on hold and went to work to support his new family. He’s done a little bit of everything, and none of it has been glamorous. “From savin’ lives to cleanin’ poop stains out of carpet, to prayin’ that you don’t disconnect your services … to me, I’ve done it all,” he says. “[I] even worked a retail store to where, in three months, they wanted to make me the store manager of a female retail store.”

The worst one was with Stanley Steemer. “It definitely is a job that makes you appreciate the things that you have, appreciate the surroundings that you live in now,” says Jamahl. “I mean, you go from some beautiful, extravagant houses … To the most gut-wrenching … type of houses.”

Turner is also a member of the United States Armed Forces.

He says service has made him more disciplined, increased his ability to react to intense situations and given him essential survival skills. “I love it; I’m glad for it; I’m stronger ‘cause of it.”

Being in the Army has also helped to change his state of mind. “I mean, it’s just [like] the fortune cookie I read the other day: ‘You change the way you think, you change your destiny.’ [If] I let negative thoughts go in about it immediately, negative feelings is what I’m going to have,” says Turner about the possibility of being deployed. “If I’m [like] ‘Cool, awesome, let’s go ahead and do it,’ … I’ll be squared away.”

Music has been a godsend for Jamahl, something that’s allowed him to make sense of everything else. “Pittsburgh, all I did was escape by runnin’ into the woods. I’d go hang out in the woods, I’d go do adventurous things, work on basketball, etcetera, dirt-bikin’, whatever. I moved from there to the inner city; had no outlet, didn’t know nobody here — all I had was basketball.

“I was already good at drawing, but drawing stood there, it held one moment, just that precise moment when I drew that. It’s boring after you look at it for 30 seconds. Then came dancin’. Dancin’, I picked up here in Milwaukee and I became very, very, very good at it, but it was silent — it didn’t fully express how I felt.”

“Music gave me the opportunity to express everything that was on my mind, became an outlet for all the pain that I had bottled up.”

He says music helped him develop his own way of thinking, too. “It helped me think independently, be more strong and confident about how I feel in terms of my choices and what it is that I want to do with my life, and what may be, like, my moments of … ‘you know what, here’s the truth and this is what it is! Do I have to put it in this form for you to get it? Okay, I’ll do so.’”

“You could spend frivolously and die owin’ somebody … Or, you could have that money to spend, ‘cause you paid everybody off first.”

Turner says his biggest challenge is not being able to accomplish everything that he wants in a given day. Even so, he continues to strive toward that end. “I like to stay productive as much as possible, maximizing every moment of the day I can, as much as I can, to something that’s going to be productive for the future, meaning that, I’m planting the seed, all I gotta do is water it,” he says. “I like to keep my hands in those type of pots.”

“If I got to get up and go to work, okay cool, fine. If I don’t got my kids, what am I going to do in-between the times, before I go to sleep, before I go to work the next day? I maximize that time, no matter what.”

And, despite everything that’s behind him, Turner continues to look forward. “Gettin’ back to school, gettin’ that degree, gettin’ my house … speaking everything into existence on a positive note. Accomplishing everything that my heart desires and I put my mind to. There’s so much I could say right now — the list would go on and on and on.

“‘Hear ye, hear ye, this is what I want!’” he shouts. “I’m grateful for everything, and I will accomplish everything I put my mind to.”

Pharaoh Mac & DMT released their third album, Symbols, in August 2015. You can hear their music on bandcamp.com, iTunes and Spotify.

Did you find value in Jamahl’s story? If so, please subscribe to our newsletter; we publish the story of a different Milwaukeean every week.