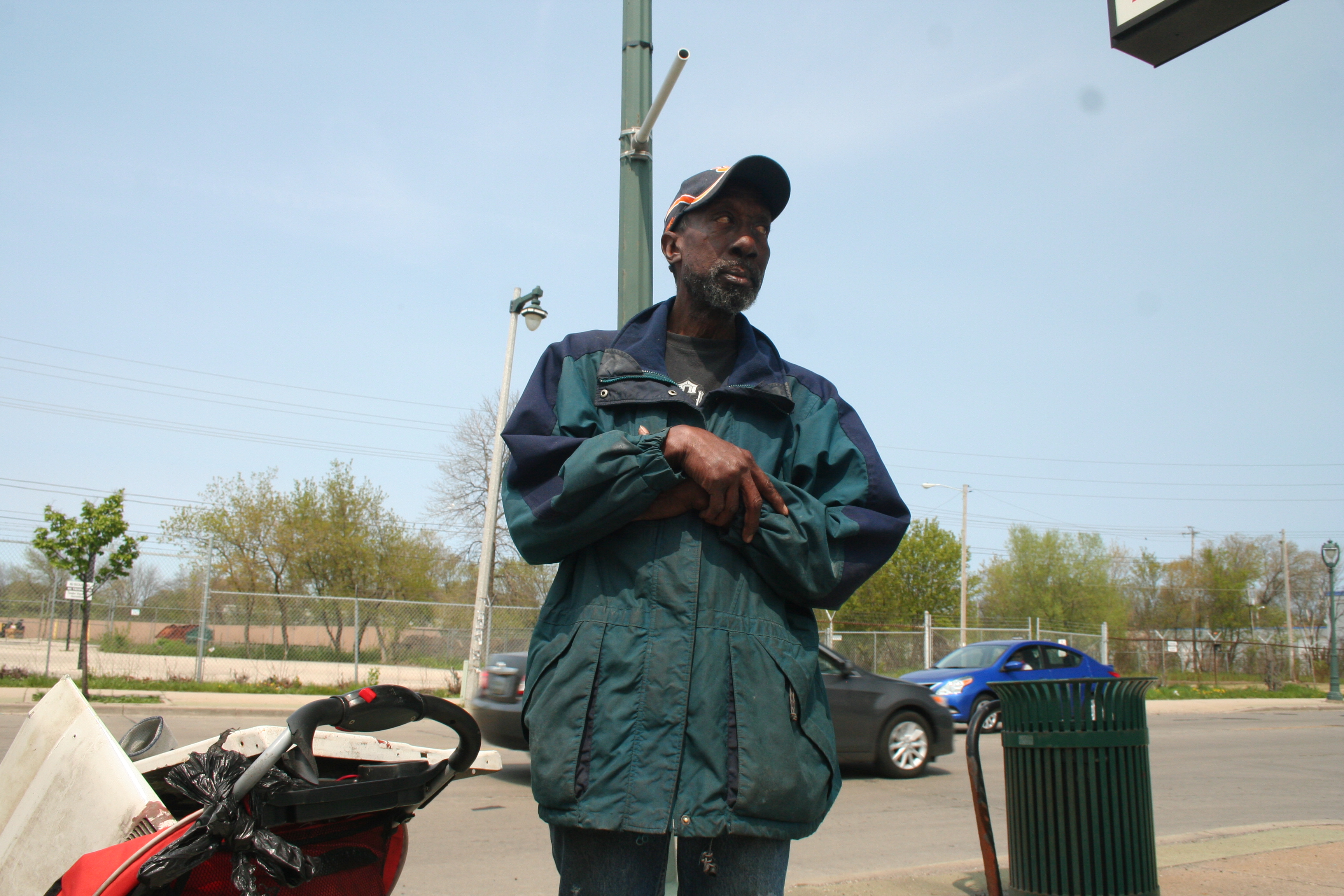 Deirek Smith pushes a tattered stroller down West Lancaster Avenue on a sunny spring day in Old North Milwaukee. The stroller is filled to capacity with a mound of scrap metal — mostly an air conditioner he had the fortune of coming across. Smith, 57, walks with a leisurely gait toward a scrap yard on Mill Road.

“I was born in Pine Bluff, Arkansas. I been here since 1964. And, my life took some real [turns], after one lady I was with for, what, 20 years, she died of cancer. And, then, after her, I met another lady and she died of cancer after 8 years,” he says.

Smith, who was the youngest of 13 children, lived down south until he was about 7 years old. Then, in the early 70s, his family packed up and made the trip to Milwaukee. “I guess they was tryin’ to do better, make better for us,” says Deirek of his mother and father who have since passed. “They did what they had to do.”

“[There was] a whole lot you didn’t get,” Smith says with a laugh. “But you got what you got and you was happy ‘bout it.”

He describes a bit of today’s haul; there’s some copper aluminum, brass and the air conditioner, which he deconstructed — it’s worth it, he says, the difference between $3 for the whole thing and 3 cents a pound for the separate sheet metal. “Fond du Lac, they close at twelve o’clock so, on Saturday, I like to go this way, ‘cause I have more time, you know, to look for things.”

“Tried to work at some temp jobs, you know. They brought me for a few days … quite a few ‘a those. But, you know, I don’t have a phone, so they kinda short me when they might have some work for me — they ain’t got no way to get in touch with me, so I have to call them and see what’s goin’ on,” he says.

“They always tell you this sometimes, where if you can make it there with that company for, like, 30, 60 days then they may hire you permanently. But I ain’t never got that close. You know, I make enough to get me a two-day check, then I get back to this. It ain’t no fun.”

Often, Smith stays at the Milwaukee Rescue Mission. He said he appreciates the help — they provide a meal and a bed for the night — but individuals have to be there by a certain time and he says there’s no tolerance for being “messed up.”

“Sometimes, I’d rather do this,” he says of scrapping. “‘Cause, you know, I’m walkin’ around, ain’t messin’ with nobody, you know, just doin’ my thing.”

Deirek says he will usually have “maybe nine or 10 bags ‘a cans” that he’ll get between $15 and $20 for on a given day. In a good week, he’ll take home about $70. He says about $10 of that will go to a friend for allowing him to spend a night or two, and then he’ll buy some cigarettes and beer.

“My daddy drunk a lot,” says Smith. “My mother was good.”

He says it was the drink that eventually killed his father. “He got smaller than me — he was like 200-some pounds, then, when he got sick, he just deteriorated. Got sick and just couldn’t get out the bed no more.”

“When he passed, he got bed-struck, where she (his mother) had to take care ‘a him, and then she started drinkin’.”

Deirek says he thinks the pressure of having to care for his father got to her.

“She kinda lost her mind, I think,” he says.

He still has some family, though. “I got a few brothers and sisters left but, see, this how I’m livin’, they doin’ a lot better than me,” says Smith. “They don’t push me to the side but they ain’t, like, crazy ‘bout it.

“You know, they always tell me I could do better. I believe that too, but this is what I’m doin’ right now.”

Where he is and what he’s doing didn’t just happen, either. Deirek says he doesn’t want to blame his situation on the women in his life who died unexpectedly, but it’s hard to separate the two.

“It … made me kinda sad,” he says. “I just kinda felt like I didn’t wanna do nothin’ else right now but just make it the best way I can. And, that’s what I’ve been tryin’ to do.”

“What I would like are one of them temp jobs to last a little longer, maybe get me a little room, or a crib, or something, where I can be at home — my home. That’s what I’m lookin’ forward [to]; that’s what I believe gon’ happen.”

Did you find value in Deirek’s story? If so, please subscribe to our newsletter; we publish the story of a different Milwaukeean every week.