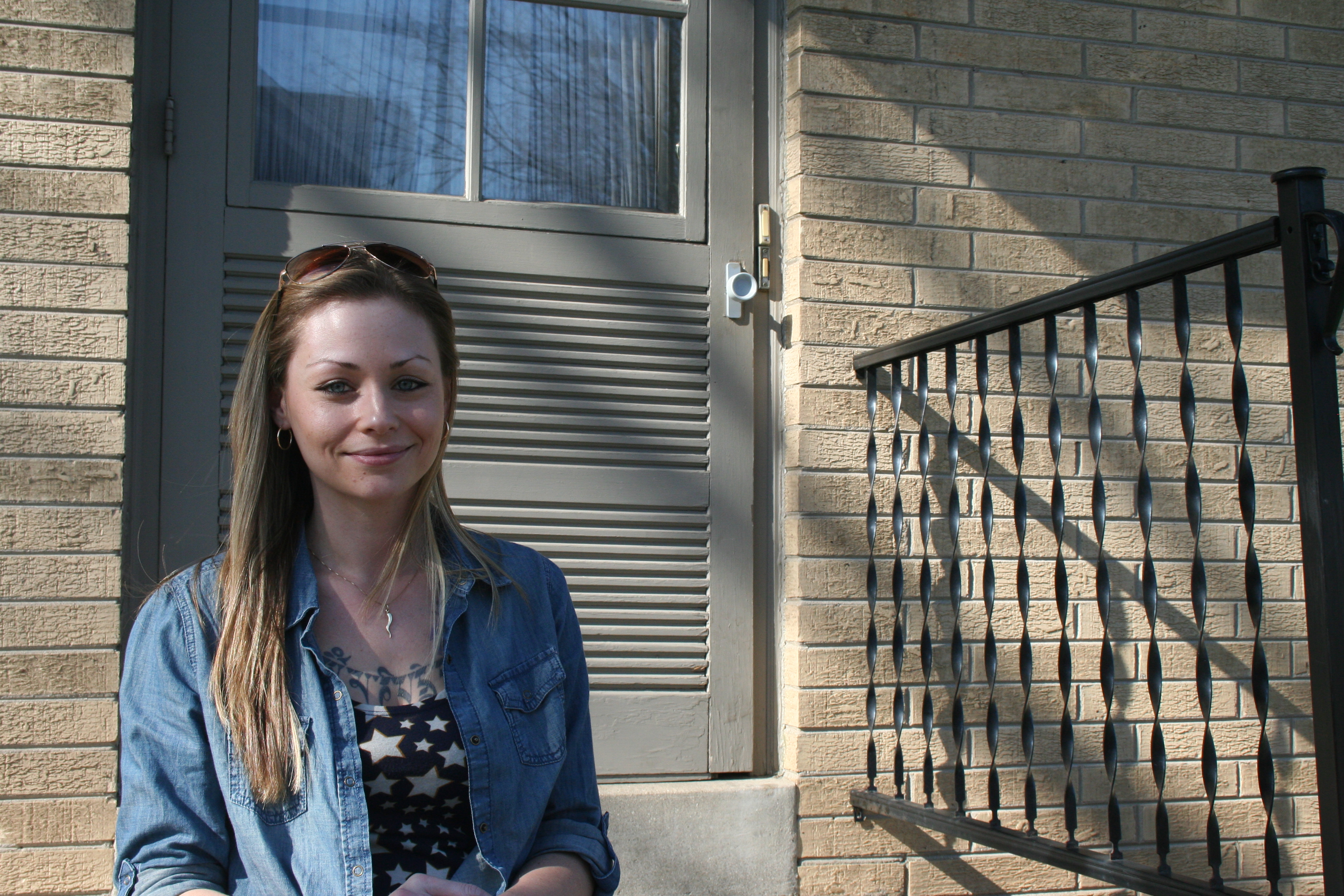 Katie Glembin sits on the concrete stoop of her family’s home in Jackson Park. Glembin’s 8-year-old daughter and another young girl rotate between playing in the yard and sitting beside her.

“She’s my best friend,” says Glembin, who’s a single mom. “It’s just been great, just us two. I mean, obviously, two incomes are better than one, but we’ve made it work.”

Katie grew up in Milwaukee, near South 83rd Street and West Howard Avenue; there was a feeling of togetherness, there. “It was great,” she says. “We had a lot of close friends in the neighborhood.”

Her family lived in Milwaukee until they moved to Racine, when she was a freshman in high school. “My parents built a house and the taxes were cheaper in Racine than Milwaukee. So, we lived there for about 10 years and then came back.”

The reasons for the family’s return were numerous — Glembin says there were too many drugs and too few jobs in Racine. She says the family felt “isolated,” too; most of her extended family is in Milwaukee and Waukesha.

Katie and her parents bought the home they live in together about a year and a half ago. Her younger sister lives with them, as well.

“We’re closer now than we were growing up,” says Glembin of her sister, who’s six years younger. “It’s nice to just always have each other. I mean, we literally just walk downstairs and … hang out a lot.”

Katie says she’s become closer with her sister, and her family, as she’s gotten older. “When you’re younger you’re more into your friends and just, kind of … trying to figure yourself out. And, as you grow up, you realize, you know, your family is who’s there for you, forever, through whatever.”

Glembin joined the United States Army Reserve during her junior year of high school after a recruiter came to her school. She did basic training that summer, and went back to finish school. “My grandfather was in the army, so [I] just wanted to do it,” Katie says. “A lot of people didn’t think I could.”

Though part of her motivation was to prove the naysayers wrong, she’s still involved, 13 years later. “I’ve never been deployed, which is like a blessing and a curse, kind of. But the experience is awesome. I mean, you meet so many people from all over, you get to go do things that other people never get to do, you shoot a lot of cool weapons,” says Glembin with a laugh. “I like it a lot.”

After graduating, Glembin worked food service-type jobs — “nothing like a career-type job,” she says. But, things quickly changed. “After I had my daughter at 22, I realized I should probably have went to college,” she says. “So, I’m just now finishing up; I have one more year left at Concordia. I’m double-majoring for my Bachelor’s in HR Management and Business Management.”

Katie, who has been doing accounting work at a car dealership for six years, isn’t sure what she wants to do with the degree quite yet. No matter what it is, though, her daughter will continue to be first and foremost.

“It was exciting, and scary,” she says of becoming a young mother. “It was definitely the best thing that ever happened to me, though. I mean, it makes you grow up and realize there’s so much more to life.”

After her daughter’s father, Glembin says she wasn’t with anyone for “quite a long time” but, eventually, she found someone else. Her boyfriend’s niece — the other girl who Katie is watching — is exactly a month, to the day, apart from her daughter in age.

They’ve been together a little over a year. “It just—it was one of those things where it was almost … something we’ve both never felt. I mean, a year is not a long time, but it is to us. You know, I mean, it’s like so much has happened in a year that it’s just crazy to me.

“[My daughter] fell in love with him right away and he loves her — it’s just great.”

As far as looking forward goes, Glembin is excited to finish school and hopefully find a job that pays a bit more. Besides that, Katie and her boyfriend are thinking about the future, too. “I mean, we want to buy a house, we want to do all those things that, you know, is part of the American Dream, I guess … and just give our girls a good life.”

Did you find value in Katie’s story? If so, please subscribe to our newsletter; we publish the story of a different Milwaukeean every week.