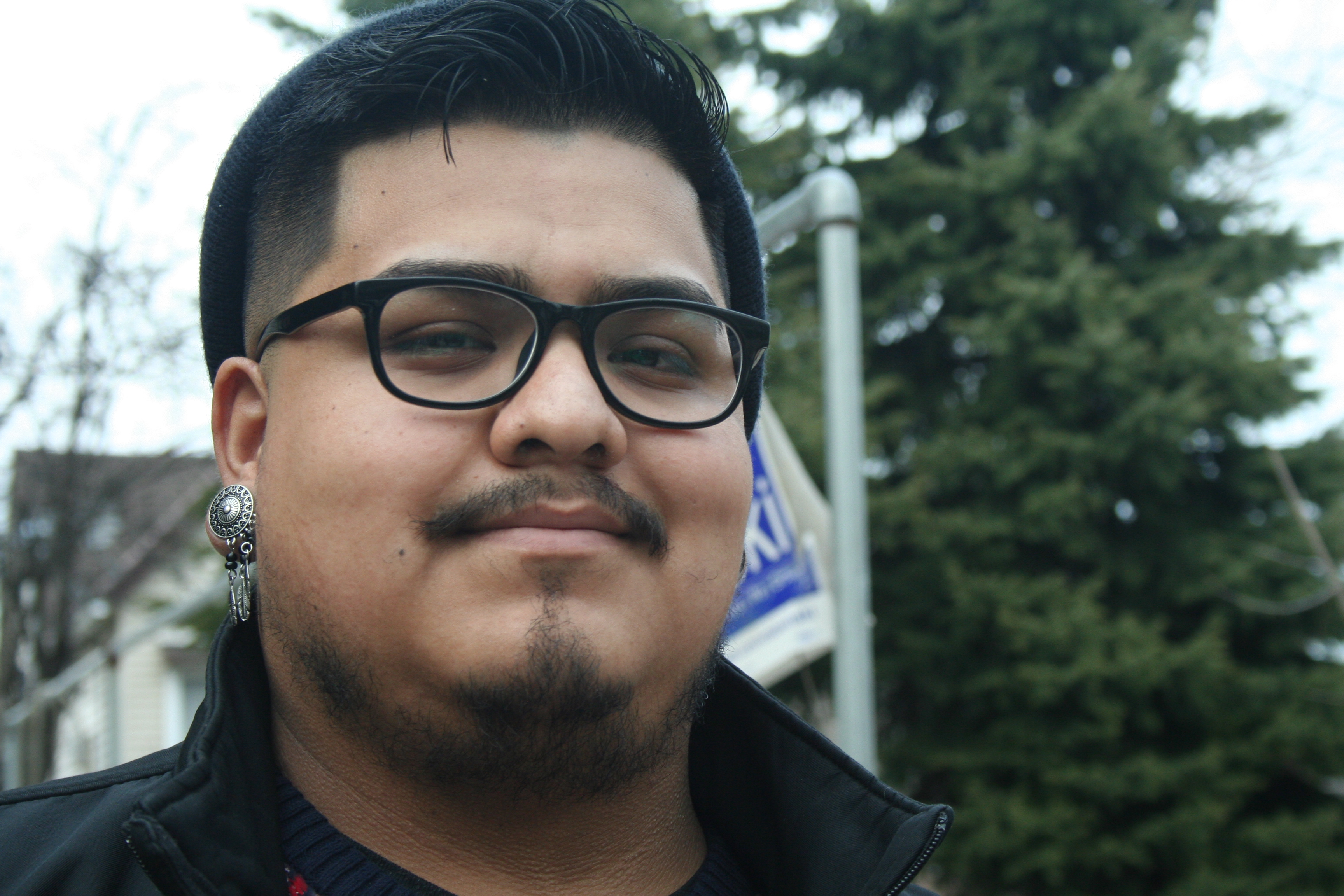 Diego Flores stands in front of his family home on the 3000 block of West Orchard Street in Milwaukee’s Burnham Park neighborhood. Flores, who has been in Milwaukee since he was a young child, says though the city has its challenges it has some bright spots, as well.

“When you grow up in such a diverse community, you always meet different types of people. They’re not necessarily always gonna be good, so you’re not necessarily gonna be always makin’ the good decisions. I definitely [had] my troubles as a teenager — I committed some crimes,” he says, adding that it wasn’t anything serious. “I love Milwaukee. There’s honestly, like—there’s no other city I would rather live in right now.”

Flores was born and spent his early childhood in Mexico. Though he says it feels like a faint memory, there’s one in particular that stands out. “There was this thing, they called it ‘la mesa grande,’ which translates to ‘the big table.’ It was just this huge, maybe almost like a block-worth of an actual street, and it was just like a cement thing that someone built,” he says. “I remember all my friends and I would just play tag there.”

Diego was about six or seven years old when he was brought to the states by his mother — his father was already here. His three brothers — two older and one younger — came too; his older sister, Guadalupe, stayed in Mexico.

“I had the wrong friends at the wrong time,” says Flores, explaining his troubled youth. “But my brothers were always there.”

He calls his brothers “hardworking men” and says, despite the fact that they have their own families, they always found time to check in with Flores and his younger brother, to see how they were doing and if they needed anything.

“We definitely keep each other accountable,” Diego says of his family. “This is all I have, my main family. I don’t have cousins here, or aunts here. Honestly, this is all I need. We’re so small but we’re so close that I couldn’t ask for anything better than that.”

Although, not everything has gone according to plan. About seven years ago, when Diego was a teenager, his father was deported. He says he still isn’t sure why, but the ‘why’ doesn’t matter as much as the reality of him not being around.

The deportation was a strain on Flores’ parents’ marriage and even though his mom and dad talk regularly he still thinks about how hard it must be for her. “I’m sure it wasn’t easy for my mom to raise four men almost by herself,” he says.

He tries to talk with his father weekly, but it’s just not the same. “It’s been rough. You know, as much as I just want to see him and hug him, as much as I want to just go on a drive with him, or just have a beer with him or anything, I know that’s not gonna be possible any time soon.”

“I want to work with the community”

Diego attended Granview High School, an alternative school on South 13th Street, but says he wasn’t able to continue on to college because, being the “man of the house,” he had to help provide for the family.

Flores started working right out of high school — two part-time jobs — so there just wasn’t time, he says. “Now that we’re more established, I feel like this is the right time.”

His long-term goal is to do work in community-building and education. “We want to change people … but I want to start with kids. ‘Cause I feel like if we want to start changing our generations we have to start with the new ones, and we have to give them a good mentality … you’ve gotta teach them better than what we’re doin’ now.”

Flores has helped at a camp in nearby Hartland where he used to work with black and Hispanic children — many from the North Side and some from the Boys & Girls Club. He says seeing those kids interact gave him hope. “To them, they’re all kids and they enjoy the same things — they don’t let the boundary of colors get in-between them,” Diego says. “I’m sure they understand they’re not from the same place, but that doesn’t get in the way of enjoying one another’s company.”

“We can not move on forward if we don’t have a community and, you know, drop whatever’s making us adverse. We should all be—we should be a community. We’re our community — no one else is going to take care of us, but us,” he adds.

Even though it’s a bittersweet thought, Diego is looking forward to seeing his nieces and nephews grow up. “They’re gonna be great,” he says. “My family, that’s the thing, we don’t let anyone just fall behind. You know, when we see someone that’s lagging behind, we pick ‘em up and we walk together.”

“I feel like a lot of the time people don’t want to help because they’re afraid. They’re afraid of the outcome, they’re afraid of who they’re gonna help. I think part of it is they’re afraid of what other people are going to say,” Diego says. “I take my chances — if I could help everyone right now I [would]. I just do my part. You know, if I see someone in danger, [I] just give them my hand — [that’s] as much as I can offer.”

“I want everybody to be walkin’ [at] the pace that we’re all walking. If that means that everyone has to slow down, then we’ll slow down.”

Did you find value in Diego’s story? If so, please subscribe to our newsletter; we publish the story of a different Milwaukeean every week.