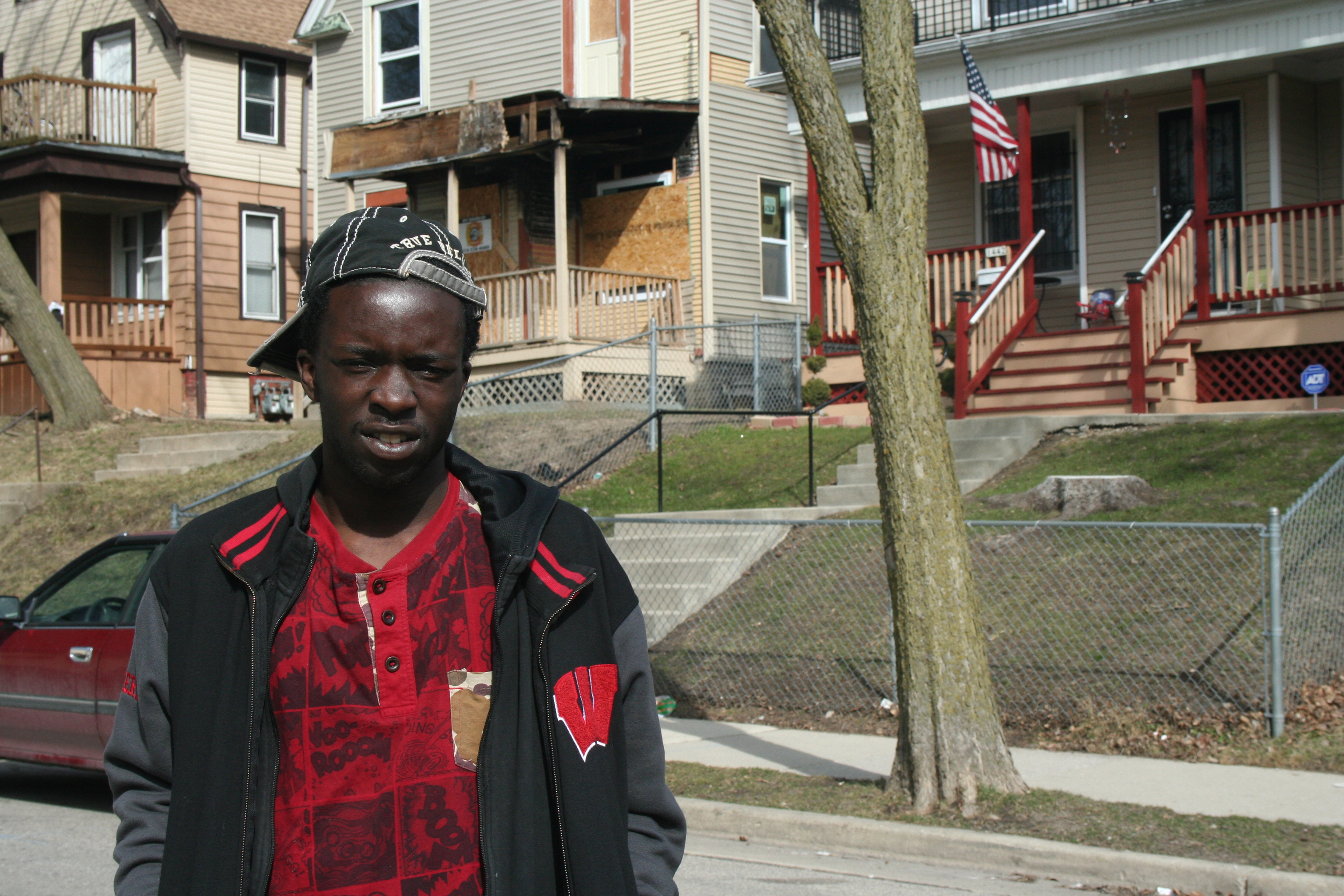 Marcell Turner walks briskly down a stretch of 37th Street, just north of Vliet in Washington Park. Turner, who sports a University of Wisconsin jacket and backwards hat, has roots in the neighborhood.

“Look at our streets — it’s dirty, raggedy, trashy — look how people are treated,” he says. “I just want peace in the world. I want everybody to feel free in the world; I don’t want nobody to feel like they gotta be controlled by someone.”

Marcell says he’s never left Milwaukee. He grew up in the area, with a lot of friends and family around.

Turner has five brothers and four sisters. “Since I was the oldest, on both sides — on my momma and daddy’s side — it’s really hard ‘cause, everything I do, they follow behind me,” he says. “So, I try to set a positive example for them to do right, instead of doin’ wrong.”

“There’s more to this world than all this violence and sittin’ around hatin’ on other people — robbin’ people, killin’ people, you know what I’m sayin’?”

Marcell says he’s made one big mistake in his life. He was involved with an incident at the Wisconsin State Fair about five years ago, where 11 people were injured and 31 were arrested.

At the time, he says, he “didn’t care about nothin’” so “whatever happened, just happened.”

“I was the oldest so things was kind of hard for me — you know what I’m sayin’ — tryin’ to make sure that [my siblings] straight and all that,” Marcell says. “My momma, they had her in they life.”

“Basically, I had to make sure she made sure they was straight before I was straight,” he says. “So, everything I wanted, I had to go and get it by myself and take it — you know what I’m sayin’? However I got it’s, how I got it.”

He said some of his brothers and friends started going to jail after that. “So, once they got out, I talked to them [and told them] there’s more to life than doin’ that,” he says.

His mother raised him and his siblings by herself, without much help, at all. “She kept a roof over our head, we never got evicted or nothin’, we stayed eatin’, we never was hungry — she was a good parent,” says Turner. “She was rough on us, but that was just to show us how this world is; it’s not easy out here.”

Marcell knows his father but he didn’t share the responsibility of helping to raise Turner and his siblings. “He aight when he here, but when he ain’t here — you know what I’m sayin’ — we don’t hear from him until I talk to him, or whenever he ready to see me.”

“He his own man. He probably had a reason for why he did what he did. But, hey — you know what I’m sayin’ — I don’t judge nobody about how they do what they do,” he says.

Now, Turner has children of his own — two already and one on the way — all girls. He says it would be nice to have a son, but having a bunch of girls is “pretty awesome.” He also says it’s changed the way he approaches and acts toward women.

“So, that’s why I don’t disrespect women,” says Turner. “Imagine if you had a daughter. You would know how it feels.”

Turner attended South Division High School and got his diploma. He was taking entrepreneurship classes at MATC until recently; he hopes to start up again by September at the latest.

Early on, he became interested, and involved, in his neighborhood. “I used to just watch TV and just see how everybody else’s area was very clean, grass is green … they looked like their whole block was gettin’ along and stuff.”

At 13, he started walking around organizing small cleanups and cutting neighbors’ lawns “just because.”

“I’d cut their grass, they’d just throw me some money,” he says.

That’s when Marcell had an idea. He created some fliers, posted them in local stores and started a landscaping business. He cut grass, raked grass, shoveled snow and more. “You know, anything you want done with your yard or anything, just call me and I’ll come. That’s how I used to hustle and get money,” he says.

Currently, Turner works for two temp agencies, but wants to work for himself. “I’d rather work — you know what I’m sayin’ — than be out here on these streets.”

“Drug dealer, that ain’t the only way … The way I’m doin’ it, it shows you discipline.”

However, he also expressed frustration at a political environment and elected leaders that he says do not cater to young people, or help to provide them with opportunities.

“They not lookin’ at the younger generation and what’d help keep them out of trouble, what’d help put something better in their life than seein’ what’s out here in these streets.”

He says there need to be more youth centers, more activities for young people, and avenues — like he hopes his business will be — for them to succeed.

He wants to be part of making it better. “I’m looking forward for me to make some type of change … not just for myself, not just for my family and my kids. I want to make a change for the world,” says Turner. “If everybody stopped just thinkin’ about they-selves and think about each other, I think the world would be better.”

Did you find value in Marcell’s story? If so, please subscribe to our newsletter; we publish the story of a different Milwaukeean every week.