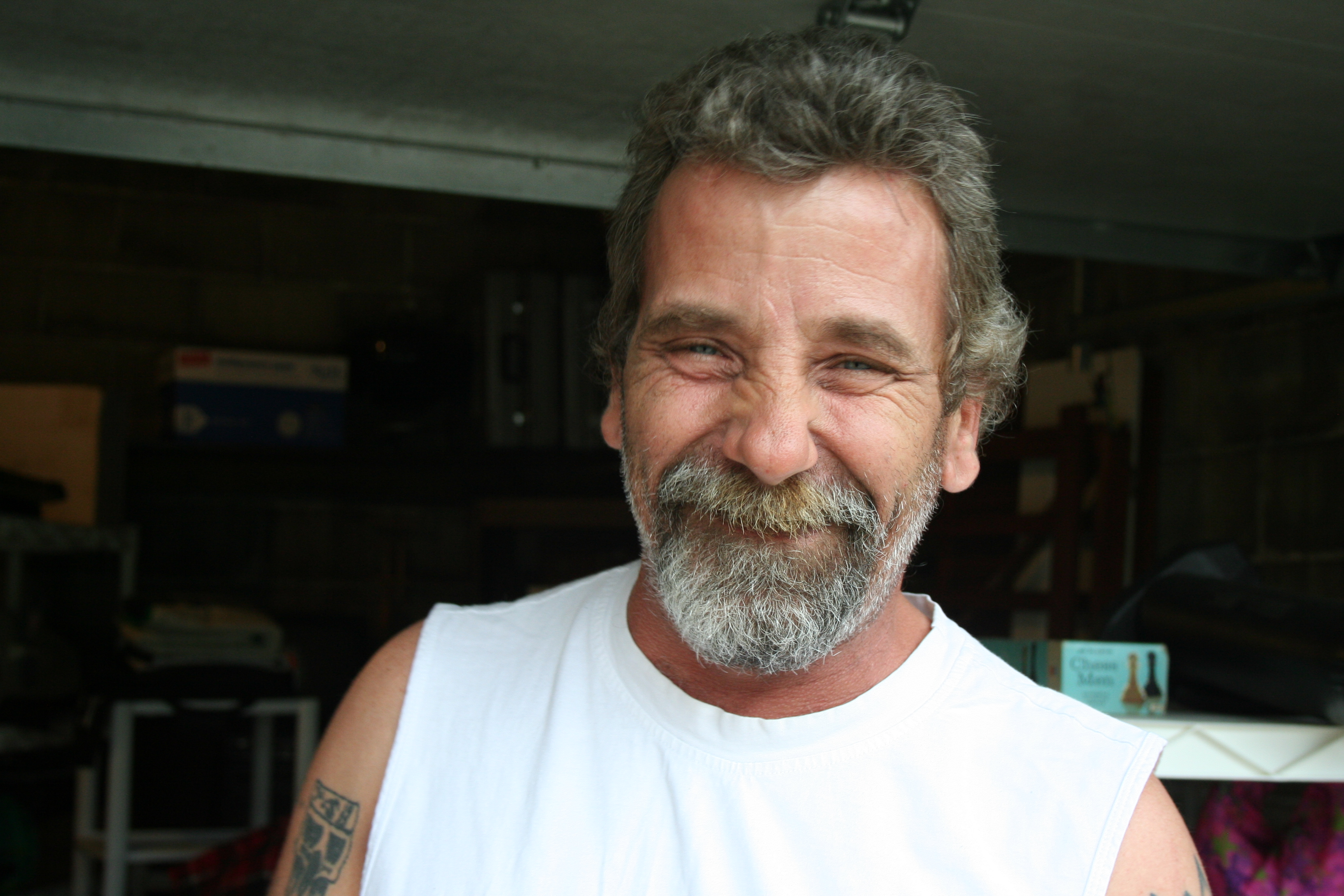 Kevin Carlton stands just outside a cluttered garage south of National Avenue in an alley off of 47th Street. Carlton, who displays tattoos from under a cut-off white shirt, has only been in Milwaukee for two years, but it’s been a long road here.

“I grew up in a rough family; my dad died when I was 2 — he got hit by a drunk driver on the freeway and mom raised five of us,” he says. “I was the youngest one out of the clan, so, I really didn’t have a chance to miss him. But, you know, earthquakes and the beaches — I love the beaches; that’s all I miss. California is full of people, too crowded.”

Kevin, who’s the youngest, says his mom “did her best and all she ever did was show her love” but their childhood was difficult because they were never in one place for too long. “My siblings were party-ers, got us kicked out of place [after] place. But, mom wouldn’t let us go so she kept us all together, and we went place to place.”

“Mom, she got mad, she got mad a lotta times but she never did not show her love, you know?”

But, because of the constant moving, school was hard; it was hard to find a place to belong. “My senior year was awesome. My junior year … was awesome. Everything from there below, I felt like a nobody,” says Carlton. “We moved around so much. I couldn’t bring my friends with me so I had to make new friends and, you know, you show up to a new school and … they don’t accept you real fast — you gotta work your way into the crowd.”

Why those last two years? “My junior year became awesome because I met my high school sweetheart. And, my senior year was awesome because we were together throughout that year. Everything was possible,” he says.

“My mom remarried when I was in my junior year, also, and that established us in a house. I mean, we were actually in a house that was owned — we were not renting or bein’ kicked out the next month.”

After losing his father at such a young age, Carlton had another brush with death early on. His oldest brother died a week after his twenty-first birthday from an infection. “The Spinal Meningitis, the doctors explained it, comes through an opening in your orifice — you know, your ears, your nose, your mouth. That’s all I know,” he says. “He had an ear infection — and, then, it got into him, then it came straight up through his spine into his skull, the way I understand it.”

The experience was “tragic” for Kevin. “That was my favorite brother — he always looked out for me.”

“I ran the streets for a long time in Long Beach doin’ dope. Yup,” he says. “People on meth and people on crack, they really need to go out and steal to supply it. They don’t work, or they don’t work at one job for very long, you know. They might have five or six jobs in a year’s time.”

As Carlton tells it, he started having kids and, though it didn’t happen right away, because of that change, he “realized that ain’t the life.”

But he wasn’t able to escape it completely. “Right now, my oldest son, he’s in Redgranite Correctional Institution … out here. And his son was born last year — he hasn’t even met him yet. You know, he’s goin’ through the same things. I promised him, when he was born, ‘You will never move around like I did.’ And, we did. You know, we had to.”

He and his eventual first wife left with their two young boys. “We moved to Texas to get me off of dope, and that worked,” Kevin says.

In Texas, Carlton was able to to get away from the old crowd. And, he found steady employment, too. “I went to work for Dollar General. Five years, I became a store manager … they worked the hell outta me. Ever since then, I’ve been from pipe yards down in Texas to where I’m at up here, now, I’ve been drivin’ a forklift everywhere I go.”

That was 20 years ago that they made the move; a lot has happened since. Kevin got married a second time, which combined their five already-existing children — his two boys and her two boys and a girl. “It lasted a good three years, I think,” he says. “But it got too chaotic and then we went through a terrible divorce, and I did a backsplash and got on dope again for a few months. So, I went to prison.”

“I was smokin’ crack,” says Carlton. “I started smokin’ crack for about three or four months and it destroyed my second marriage. And, then, after that, I just went hell-bent for leather.”

It was the only time he’s touched the stuff in the 20 years since giving it up; and it was simply a matter of substituting one thing for another. “She wanted me to quit drinkin’, and, you know, beer smells on your breath where crack don’t. It was easy to hide until the bills came in and I couldn’t pay ‘em. But, lord, let’s not go there. I’m offa all that,” he says.

Why did it happen, then? Kevin pauses. “Well, I could say my version or I could say what I had a counselor tell me one time. Probably what he said fits best: I have an addictive personality. It’s just like these — I can’t give up these cigarettes. You know, it’s addictive; I gotta have somethin’,” he says. “Livin’ up here in Wisconsin, beer is the biggest thing, now, I’m tellin’ ya.”

He adds, “I could blame it all on my second ex-wife and say it was her fault why I turned around and started doin’ them things, but it wasn’t — that’s all on me, it’s a mental thing, you know. I’ll tell you this: you can’t blame anything on anybody. It’s your right to make your decisions.”

This time, though, it’s different. “I grew up,” he says. “I grew out of it. One of the things I never thought I’d give up was smokin’ weed — I used to smoke it every day and I still support anybody that smokes weed but it doesn’t do me like it used to. I don’t like it for me.”

After spending two years in prison, Carlton relocated to Milwaukee because his first wife, who lived in the area, had gotten custody of their children. He was here for about seven months but went back to Texas for a bit before coming back for good. “I’m old,” he says. “Come up here to be around my sons and live life.”

He met “a really good girl” and they’ve been dating for a while. These days, he’s just trying to focus on being a father and grandfather. “I wish I coulda done it better, but I think we all do,” he says of being a dad.

“I never though they’d get it,” he says. “Back in Texas, I built ‘em a half pipe — no drawn out plans or nothin’, I just bought the wood and built it — and they didn’t do nothin’ but roll a board down it.”

Now, his 21-year-old is an inline skater and the older boy skateboards.”Yeah, they came along.”

For Kevin, the future’s still uncertain. “Friday, when I got off work, my boss talked to me and I’m bein’ reduced to two days a week, right now. Times are hard — I work in recycling. We just moved from State Street over here across the interstate down to Chase, alright, and, uh, I don’t know, maybe the move affected us. But … I’m workin’ through an agency; I’m the temp, so I’m the first one they gotta pick on,” to which he adds, “No big deal.”

He’s just taking it a day at a time. “I just live every day, day for day,” he says. “I wake up in the mornin’, I thank god for the breath I have and for lovin’ me.”

Did you find value in Kevin’s story? If so, please subscribe to our newsletter; we publish the story of a different Milwaukeean every week.