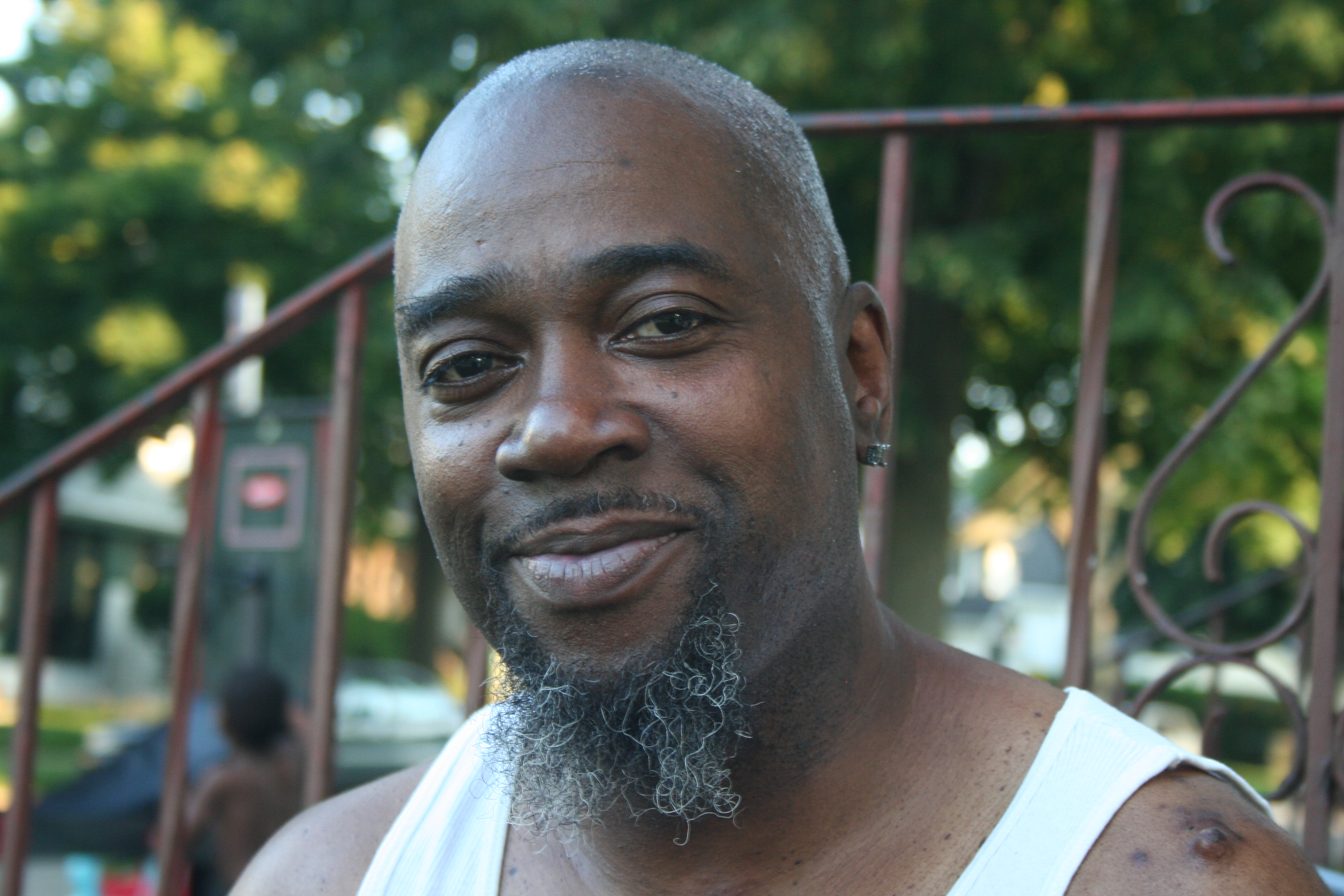 M.D. Dangerfield Jr. sits in a yard near 2nd and Nash in Williamsburg Heights. A small, portable grill is filled to the brim with meats; children play on the sidewalk nearby. Dangerfield — draped in a white, tank top undershirt and a towel that hangs from his shoulder — looks on.

“I’ve been around here ‘bout a good six, seven years. It’s a big difference from where I’ve been,” says Dangerfield, who was born and spent most of his early childhood in Chicago. “It’s more peaceful.”

He and his family lived on the west side of the city. “I left at the age of 9, came up here,” he says. “Chicago was rough — lot of gang-bangin’, poverty. It was a rough life.”

“My mom … and dad wanted something better for me.”

M.D. says his mom and dad were like “night and day,” opposites in every way. “Pops was a security officer. Moms was a nurse,” he says. “Pops was a hard worker. Both of ‘em born and raised in … Mississippi. My father dropped out ‘a school at a young age [to] help his mom raise kids. You know, his younger siblings and stuff like that. My moms, come from a big family herself — maybe about 16 people. I think she fit, like, in the middle. With them, it was strictly [about] education.”

Eventually, Dangerfield, who’s the second-oldest, admits it was his mom who raised he and his five siblings — “three boys and three girls, like the Brady Bunch,” he says — and his dad, not so much.

“You know, you need a man with guidance,” he says, especially a young boy who might see violence as his only resort, who wants to be “tough.”

Dangerfield says he had to grow up fast and, ultimately, ended up “raisin’ myself”; he also had a sister who was barely a year younger. “I got out the way real fast.”

When he first came to Milwaukee, the family lived near 35th and Lisbon. Dangerfield attended the old Ninth Street School, which he says wasn’t much different from what they had left in the Windy City. “Back then, it was rough,” M.D. says. “It was like, comin’ from Chicago — everything fast, a lot of gang-bangin’, seein’ people die, while you go to school.”

At 10, Dangerfield says, yes, he saw people die in front of him in school. “Back then, there was a lot of stabbin’s; not too much with the guns — you know, fist fightin’ and stuff like that. Then, it escalated to … people dyin’.”

“It was just like I never left Chicago ‘cause that’s what you were used to.”

Dangerfield saw extreme poverty, there — “18-story buildings with … 10 people in a studio apartment,” he says.

Why all the violence? “The strong survive,” says Dangerfield. “So, we forced a lot of stuff. Instead of tryin’ to solve the issues with our mind, we would solve it with our body. And, you go wrong when you do that.”

Immediately after high school, Dangerfield started a family. He says it was difficult, raising kids and holding down a job.

“At that time, [I] took any job that was there for me,” M.D. says. “Later on in life, I got certified as a carpenter, drywall installer, painter, mason, something I love to do. And, that’s what helped me out a lot.”

“I went back to where I started from: education, instead of, you know, hangin’ in the street.”

“I seen a friend of mine — I say he’s my best friend to today — growin’ up bangin’, not bein’ responsible, bein’ immature, doin’ the wrong things. I seen him [transform] when he had a kid, one kid.”

The young man changed his life, got out of the gang scene and became a counselor for youth experiencing similar challenges. “So, if you [were] there, as his friend, that’d change you, inspire you to not just look at yourself but to see this is bigger than you, ‘cause we’re all one big family. And, that’s what it’s about.”

It’s that kind of perspective on life that Dangerfield has tried to impart on his eight children, most of whom are already grown. “I’m excited about passing on the knowledge that I have, not holdin’ it to myself, seein’ that my kids do better and also that that my grandkids do better.”

“The way you gon’ survive and make it through life is to have an education, which is a career, [so] that you can go anywhere in the world and change the world,” he says. “And, that’s what we need more of. We need more people … that’s willin’ not to judge, encourage each other, support each other, motivate each other.”

He adds, “Just because you grow up fast doesn’t mean you have to be lost.”

Did you find value in M.D.’s story? If so, please subscribe to our newsletter; we publish the story of a different Milwaukeean every week.