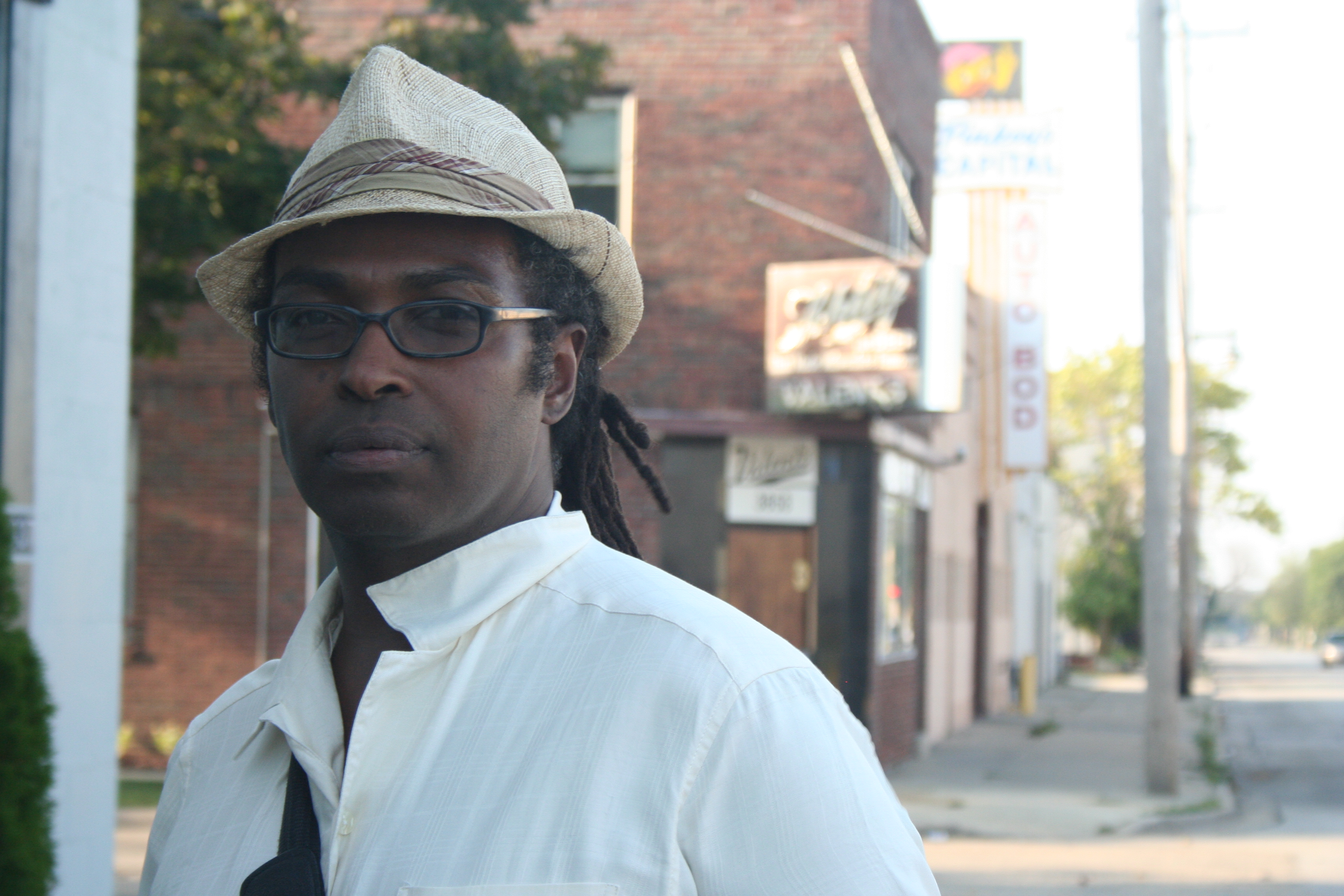 Eric Jefferson walks down a lonely stretch of North Richards Street, just south of Capitol Drive, in Williamsburg Heights. The ends of his untucked, short-sleeved collared button-up flutter in the wind on a warm September day.

“My mother … she moved here, I was probably one or two when she moved here because her father, my grandfather, lived here and he was a minister,” says Jefferson. “She moved here to get better jobs.”

“She worked in the cotton fields and she worked for cleaners,” he says. “It was small-town Arkansas, black neighborhood, kind of poor, working class.”

Jefferson stayed in Arkansas and was looked after by a woman and her adult son and daughter; the son was a WWII veteran. The living situation may seem complicated to some but, for him, that was just the way it was.

“It’s only complicated, as an adult, trying to explain it to other people. It didn’t feel complicated at all, growing up,” Eric says, adding that it was like living with extended family. “I grew up in, sort of, like a foster home — that’s the best way to describe it, in a way that people understand.”

But he didn’t have that same excitement. “I remember feeling like, ‘Oh, okay.’ I mean, he seemed really excited and … I didn’t want to say, ‘Well, I don’t even know that guy.’”

At the same time, it wasn’t a secret who Eric’s father was. “I was close to my father’s side of the family,” says Jefferson. “My cousins lived across the street — his sister and her husband and their kids — and I was real close to them.”

“The cousin who was a couple years younger than I, he was one of my best friends, growing up. But I didn’t know my father. I knew my aunt and I knew, you know, I had an uncle down the street and I knew all of them but he just wasn’t around.”

And, it wasn’t until much later that that would change. “I don’t remember how old I was the first time I met him. But I had no idea what he looked like.”

Then, in 1985, Jefferson followed his mother to Milwaukee, where a good portion of her family ended up as a result of the black migration northward. “For a couple years I helped take care of my grandmother and then she died, I want to say two years after I came.”

Though the event was mildly dramatic — “she dropped dead at my feet,” Jefferson says — it didn’t affect him as deeply as one might expect.

That detachment could be the result of the epilepsy — or seizure disorder — that Jefferson has struggled with most of his life. He attended MATC and then UWM but ended up dropping out of school after having a seizure in class.

“With a seizure disorder, it’s usually a question of finding the correct medication that will control it. And, if you can control it, then, you know, you can have a pretty normal life. Some people never find the right balance or the right kind of medication and I think I found the right kind about 15 years ago.”

But he tried a lot of different drugs and combinations of drugs before finding that balance. “You go to different doctors and you see different neurologists and they all have their favored drug to prescribe to you and it just depends,” he says.

“I can concentrate a lot more,” says Jefferson, who was in his 30s by the time he found the right mix. Before, he probably would have filed for disability but, “I couldn’t hold it together enough to even fill out one of those applications,” Eric says. “I just wasn’t functional, at all.”

After leaving school, it was tough for Jefferson but, eventually, with the help of his newly found focus, he found a new future for himself. “I worked a bunch of … interesting jobs, most of them relatively low-paying,” he says. “I was a teaching assistant until 2010 and then I got laid off and I went back to school, I got my bachelor’s degree in education in 2013 and then I continued and, now, I’m halfway through my master’s degree.”

Eric is currently working in early childhood education but also assisted with a class that involved men who were on probation and parole; that’s where his heart is. “When I was a teaching assistant, I remember a couple of times, men who I’d had in my class would come in to pick up their kids,” he says. “I saw the problems that a lot of the kids had, from homelessness to having to be elementary school kids and work some kind of under the table job … that kind of thing.”

While he wants to help other people, Jefferson is also thinking more about his personal, emotional health, these days. He’s trying to deal with the detachment issues he’s experienced — a result of his condition as well as past traumatic experiences — so he can focus on enjoying the future.

He’s also turning over a new leaf with his father, who’s recently sober. “Last March was his birthday and I went to the birthday party — that’s the first time I’d ever bought a birthday present for him.”

It wasn’t a sudden change that has, now, allowed them to have a relationship but the result of time and looking forward. “I’m getting married next year and my wife wants to have kids and we had talked about, you know, them knowing their grandfather.”

Eric says he hopes revisiting some of those moments in his life will help to make him a “more whole person” because, even if those experiences weren’t the greatest, he says, “they’re still mine.” He also hopes doing so will allow him to more fully experience what is to come.

“I’m … attempting to be more mindful, more present and not feel as though I’m walking during a warm summer day and not experiencing it to the most complete degree that I can.”

Did you find value in Eric’s story? If so, please subscribe to our newsletter; we publish the story of a different Milwaukeean every week.