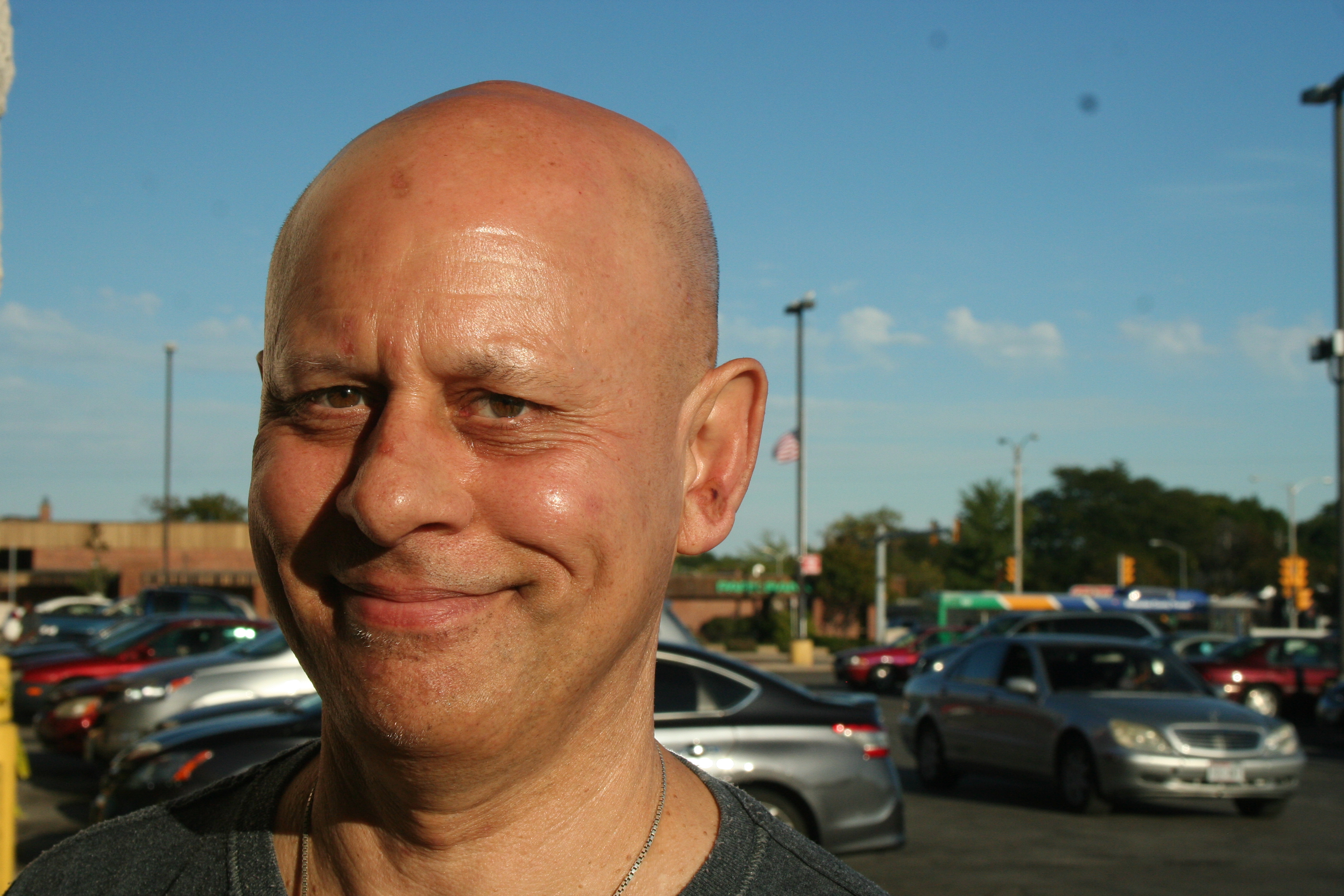 Timothy Seeger greets “Mo,” a Muslim employee at Capitol Smoke Shop, 6924 W. Capitol Dr., with the customary greetings of “Allahu Akbar” (“God is greater”) and “As-salamu alaykum” (“peace be upon you”). Seeger, who’s there for two packs of Pyramid Blue King cigarettes, which he refers to as “modern-day peace pipes,” pays the bill of $11.50 in dollar bills and pennies.

“When you think about it, there’s no fighting and no arguing when people are smoking cigarettes, for the most part,” says Seeger, who only began the habit three years ago, at 58. “They’re calm, relaxed; It’s like weed … but this is legal.”

Seeger’s family lived on 19th and Brown and 33rd and Burleigh before settling near 57th and Lloyd in the early 60s because the family had expanded. “Nice area,” Seeger says. “At that time, it was all white.”

He says it was “like the 50s, even though it was the 60s” — everybody knew everybody. It was mostly a Lutheran and Catholic neighborhood, then. But there was a Jewish family, too.

The husband and wife had both been in a concentration camp during the Holocaust. “They were, I don’t know, kind enough or felt safe enough to show me their tattoo with their number,” says Seeger, who, though he was about 12 at the time, says he understood the weight of the interaction.

Timothy, who is an oldest child, says he’s always been comfortable around older people. “I learned from my dad how to be friendly and how to be talkative and sincere and how to say ‘please’ and ‘thank you.’”

“It’s cool, it’s fun, it’s a learning process sharing ideas,” he says about speaking with people. “Life has to be between the eyes.”

“I had a wonderful childhood with family and nurturing and loving and caring but not money — always food and love.”

Seeger attended St. Sebastian Catholic School, along with most of his siblings, and then spent his freshman year at Francis Jordan High School. “I had gone to a Catholic grade school, one year to a Catholic high school but it was closing,” he says. “So, most of us shifted to Washington High School.”

Timothy says he hadn’t met an African-American until his first year at Francis Jordan. There were three young black men at the school and one “just didn’t like me because he didn’t like me”; one day, he jumped Seeger in the hallway at school.

“It didn’t change me and it didn’t make me prejudice, it just made me quizzical,” he says.

Timothy’s experience at Washington, which was 20 percent black at the time, made him more aware of the homogeneous demographics of his own neighborhood and of how segregated Milwaukee was.

Despite that fact and the discrimination he witnessed elsewhere, Seeger says his parents taught him and his five younger siblings differently. “They were always telling us, all of us kids, be kind to everybody,” he says. “If you ever marry a black person — this is back in the 60s they were telling us — it’s okay. Love and marry anybody you want.”

He has high praise for his parents, calling them, “the most non-egotistical, great listeners.” Seeger says they were generous, though they didn’t have much money, and it didn’t matter who you were — family, friends, strangers.

He has extra praise for his dad. “He was workin’ Allen Bradley, plus he was workin’ part-time at a liquor store during Christmas and then he would drive a truck on his vacations,” Seeger says. “That’s where I learned my work ethic. This guy is workin’ three jobs, makes six babies, has a wonderful personality.”

He also says, that his mother “learned affection” from his father because when she was a child she didn’t get much from her parents, who were very wealthy. But Timothy’s father, raised by a single mother after his dad died when he was 13, was not the hyper-masculine male figure that was typical at the time. “I saw affection, saw my dad cry, saw my dad say please and thank you,” he says.

That had a profound effect on him, Seeger says, and helped him to realize that, “I’m not a man and I’m not a woman, I’m a person … We’re not male or female, we’re human.”

“My precarious state of being”

After high school, Seeger got a college degree and went to work in the corporate world. He held a high-paying job at Anheuser Busch for about five years. He was making loads of money, he had a company car and had traveled to 28 states and the Bahamas. But Seeger didn’t like the person he was starting to become; so, he quit.

“My dream had always been … to own my own business,” he says. So, that’s what Seeger did. He opened a gift and novelty shop in Wauwatosa.

Seeger says, when that happened, his family thought he had gone crazy, or was an addict or both and took him to Rogers Memorial Hospital. He believes they cared more about money than they did about him, and that their greed blinded them.

“I played the game thinking, ‘Okay, family, I don’t know what your problem is. I’m who I always have been but you’re clouded; you don’t see who I am. And, you’re all Christian and you all go to church and I’m not gonna judge you but you’re judgin’ the snot outta me.’ And I think, ‘cause that’s the first time I was down ever in my life … they didn’t know what to do.”

All they said was, “‘You’ll figure it out, ‘cause you always have,’” Timothy says. “But I couldn’t.”

He claims his siblings took advantage of the situation. “They were so jealous that I had such a tight relationship with my mom and dad, they saw an opening … My mom and my dad were my best friends,” he says. “They pushed my parents away from me.”

Seeger says that during his 15-year marriage, he and his wife spent a lot of time with his parents. “My wife, at the time, and I felt older people had already lost their ego, older people didn’t talk BS,” he says. “We dug older people because they don’t have any airs about them.”

He had always been the golden child; but no more. “My dad died this year and I didn’t even know about it,” Timothy says.

At the time, Seeger was lost, without a plan or strategy to change his situation. “I didn’t know what I was supposed to do with myself,” he says.

He experienced severe depression and anxiety, which he’s getting help for now. But asking for help was something he had to learn — back then, it didn’t come so easily. “I had a lot of ego and pride,” Tim says. “You have to to work in the corporate world like I did for five years and 25 years owning my own store — I had to.”

“I never, ever, needed help from anybody before ‘cause I always had it, and now I got it back.”

“God must’ve put her there”

Seeger ended up at the Salvation Army. He was able to get back on his feet after working slightly less than two months as a bell-ringer. After about a year of living by himself in Waukesha, Timothy was on the street again. This time, he found himself living between the Salvation Army and sleeping in his car in the Wal Mart, Woodman’s and Elmbrook Memorial Hospital parking lots.

“And then I thought … ‘So, I don’t have anything but the clothes that I’ve been wearing for 45 days; where do I go?

He’d started reading the Bible during this period, “and, that’s what did it.”

“Brahma, Krishna and Shiva … Allah,” Timothy says. “I don’t care what the name is, it’s the Creator.”

The next moment, a “really nice cop” told Seeger he couldn’t stay there. “And, that’s the story. He (God) said, ‘Go to her house and ask her to help you.’”

‘Her’ was a childhood friend who’d lived next door to Seeger when he was young. He had run into her a few years before when his father was in the hospital; it was the first time they had seen each other in more than 40 years. Timothy, who has a photographic memory, remembered her almost instantly. “It’s all platonic. But we talked a little bit,” he says.

They had gotten drinks a couple times and discussed family histories. This night, she had just gotten out of the hospital after being in for a month, post-surgery. The dark December afternoon made it hard for him to find the place, which he’d been at once. But he found it and, as he sat there, she pulled up.

Seeger was 40 pounds lighter than normal and stunk of the streets. “She gets to the sidewalk and I’m still in my car. I open up the door and I stand up and I go, ‘Debbie!’ lookin’ disheveled, homeless, like I am,” he says, “I said, ‘Debbie, it’s Tim. Can you help me?’ She goes, ‘Sure, come on in.’”

“Hope is the street she lives on,” he says. “Now, imagine that.”

“I’m not gonna tell you to pray or that you’ve gotta save yourself or you’ve gotta ask God or say, ‘Hey, I want to be a Christian,’ but I believe that it’s comin’ down to the nitty gritty,” says Seeger.

“He’s hoping that it turns around ‘cause he’s created a beautiful garden for us to enjoy and most of us are too pea-brained to recognize nature, mother nature, and that’s where the Native American, I believe, comes out in me.”

“And you know what my favorite color is? Blue,” Seeger says, the same blue that graces the outside of his pack of cigarettes. “Why? Well, 70 percent of the earth is water … and, two, the creator decided that we needed something above. What color did he pick? So, most of what we see every day and every night and every minute that we’re awake is blue, but a lot of us don’t realize it.”

At least one thing has changed for sure. He says, “I never used to live day by day.”

Did you find value in Timothy’s story? If so, please subscribe to our newsletter; we publish the story of a different Milwaukeean every week.