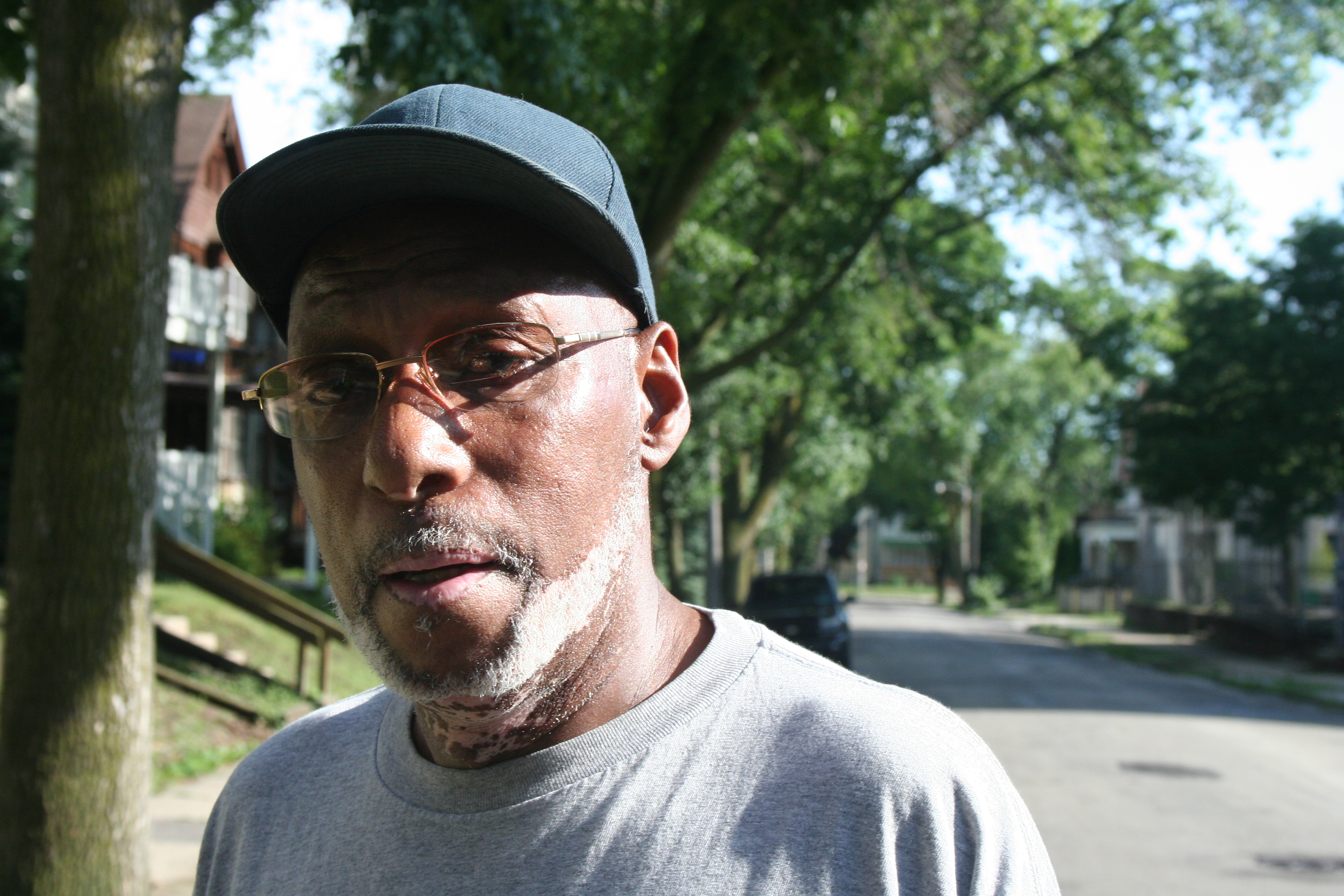 Calvin Young saunters down the steps of a porch near 37th and Roberts in Washington Park. The 55-year-old, distinguished by his fully grey, mid-length beard and two-tone skin color, walks into the empty, sunlit street to ask for a dollar or two.

“I’m trying to change my life around. [The] only thing, right now, is I’m just an alcoholic — that’s it, that’s all,” says Young, who admits he was once addicted to crack cocaine, as well.

Young was 16 when his father passed; Sixteen years after that, his mother was gone, too. “I had a good life but, you know, I chose the wrong path,” he says. “They were both alcoholics and I picked up their traits, somehow, somewhere.”

Young, who grew up on Mayflower Court near 7th and Walnut, says he had a good childhood. “I graduated from high school, too — played football, all that — but I started hanging around the wrong crowd.”

“I got in trouble, I did; I’ve been to prison and all that,” says Young, who is the oldest of five siblings.

School, for him, was about the “slick world,” or street life. Growing up between two housing projects, it was easy to get sucked in. And, at 16, Young, who had attended Lincoln Avenue School and Roosevelt Middle School, ended up in a juvenile detention center as the result of a burglary.

“It was what it was,” says Young. “But, today, I reflect about it and I wish I would’ve never did them things — I wish I wouldn’t have. I wish I would have did the right route like my sister.”

She went to college, as did one of his younger brothers. But Young, whose mother had a master’s degree in education from Marquette University, fell deeper into the life he had chosen.

“After that, I got hooked up on narcotics — I really did. You know, ‘cause I’m hangin’ around the wrong people. I used to smoke cocaine and all that stuff.”

The drug use got worse and, eventually, Young became homeless. “I used to sell my food stamps, dude, just to be able to drink, at one time. And, people were callin’ me, ‘Here come this bum, he gonna beg again,’” said Young.

At one point, with the help of his daughter, Young was able to make enough money from selling his food stamps to pay down two weeks for an apartment on the South Side. He got a job but couldn’t keep up with rent. Eventually, “the narcotics caught me again,” he says.

“That’s when I started smokin’ the pipe. And, I lost my job so I became homeless again.”

In another instance, he went to the Guest House where he got a “head start” and a job with them. But, once again, he fell off the wagon and ended up back on the street.

Over the course of 24 years, Young was in and out of jail at least four times, which didn’t make the situation any easier. “It was so easy to fall back [in] (with the wrong crowd) ‘cause you bring that mentality out [of] the penitentiary,” he says. “Everybody that you know, that you grew up with was in the penitentiary, too.”

“My mom drank, my dad drank. I used to do narcotics and I [got] off narcotics but I started drinkin’ again. I’ve been [to] numerous rehabs and stuff,” Young says. “That’s just life … in the ghetto.”

There’s no way he’s going back to jail, though. It’s been 15 years since he got out and he plans to keep it that way.

“I changed substances. I don’t smoke reefer, I do not mess with cocaine — none a that. I don’t sell drugs, I don’t do nothin’. But I do drink,” he says, adding that it’s the social aspect he enjoys and finds it hard to let go of.

At least Young, who earned his GED while at Kettle Moraine Correctional and took 33 credits in creative writing while in prison, is no longer living on the street. He also started receiving SSI income about five years ago and Young, who works odd jobs as well, says it has changed his life.

And, there are other things on his mind, as well. He’s thought about quitting alcohol alone, altogether. “That’s on my mind now,” says Young. “I’m gonna go to AA — I have to.”

“You leave that alone, you can accomplish anything,” he says. “And, I believe that in my life. I really do ‘cause I’ve been there, I’ve done it before and I had a couple years sober. But … I substitute one thing for another and that’s my damn problem. I need to get that part over with.”

Did you find value in Calvin’s story? If so, please subscribe to our newsletter; we publish the story of a different Milwaukeean every week.