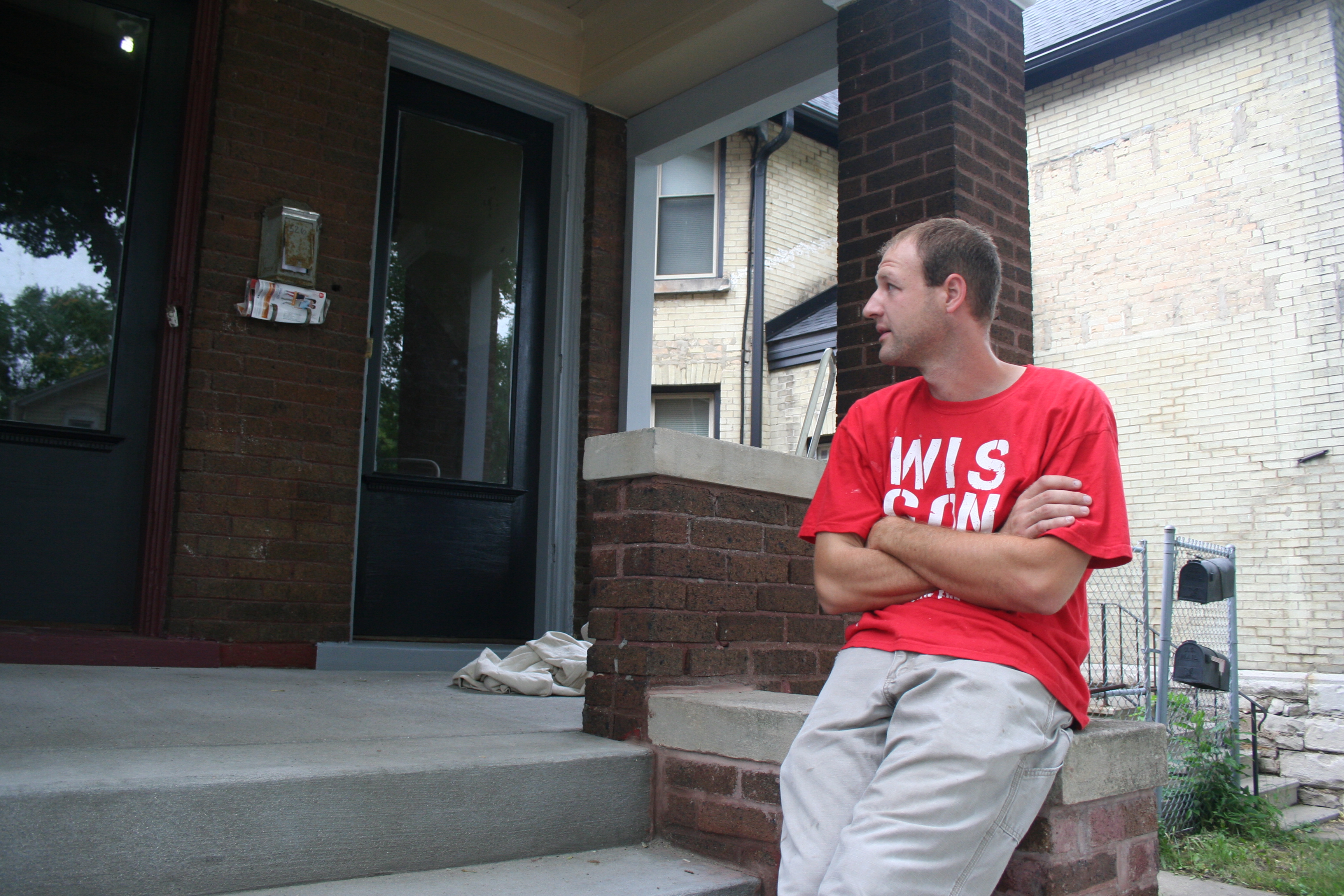 Brandon James kneels in the doorway of a towering duplex on the 300 block of West Mineral Street in Walker’s Point, painting the upstairs door a deep blue. James, who owns the home, lives in Bay View but grew up in West Allis — “basically” Milwaukee, he says.

“It was nice; it was quiet. I didn’t live too far from a park so we spent a lot of time at the park, at least in the summer,” he says. “We actually lived upstairs in a duplex that my grandma owns and my grandma lived downstairs.”

Family was a constant for James, whose great uncle lived across the street, too. “You felt like you always had someone lookin’ after you, makin’ sure you stayed out of trouble, makin’ sure you respected other people, teaching you the values of hard work … things like that,” he says.

Not that it was easy all the time. “My dad worked second shift, my mom worked first shift ‘cause that’s what they had to do to make ends meet.”

“And, when you’d ask, you know, how come dad wasn’t home or how come mom wasn’t home at the same time dad was, they explained to you why.”

“Having an elder around helped,” says James.

His grandmother would make sure he, his older brother and younger sister were cordial to strangers and respectful of those who were older than them, family or not. With family members — parents and others — constantly around and teaching the siblings, they had a lot of opportunities to learn in different situations.

“This is my day job, as of right now,” says James, who worked in property management on the northwest side for 10 years before starting to work for himself. “I worked for myself for about six months and then I went to work for a restoration company and I left there a couple weeks ago. It just wasn’t workin’ out for me … and we had work to do here.”

“You know, this doesn’t necessarily pay you right away but it’s work that needs to get done,” he says of the vacant downstairs unit.

“I like workin’ for myself, I like working by myself. I like working with other people too but it’s just … been somethin’ that, for the most part, my wife and I have done a lot of it together. And we work well together, so it’s been fun, you know?”

James and his wife have been together for nine years; they’re expecting their first child soon, which he hopes will give his family — who are all still in Milwaukee — a chance to get together more often. “It’s sad to say but, sometimes, it’s almost like you need a reason,” he says. “There’s no better reason than that.”

His life just hasn’t had much balance over the last couple years, James says — it’s been a lot of working. But his goal is to be more intentional about spending time with the people he cares about.

“Everybody has their own lives and their own things that keep them busy and everybody needs a little bit of personal time, too,” says James. “Sometimes, you spend too much time thinking about yourself, instead of everybody around you that matters to you.”

As far as what’s ahead, there’s only one thing on his mind. “Bein’ a dad is a pretty big thing. I’m lookin’ forward to that.”

It’s a little scary, too, though. But it’s just about priorities, he says. “It’ll be a life change for us. Pretty much up until now it’s kind of always been, you know, we could go out and do whatever we wanted … Now, there’s going to be something else you have to be responsible for.”

“Now, there’s this human being that depends on you 100 percent.”

Did you find value in Brandon’s story? If so, please subscribe to our newsletter; we publish the story of a different Milwaukeean every week.