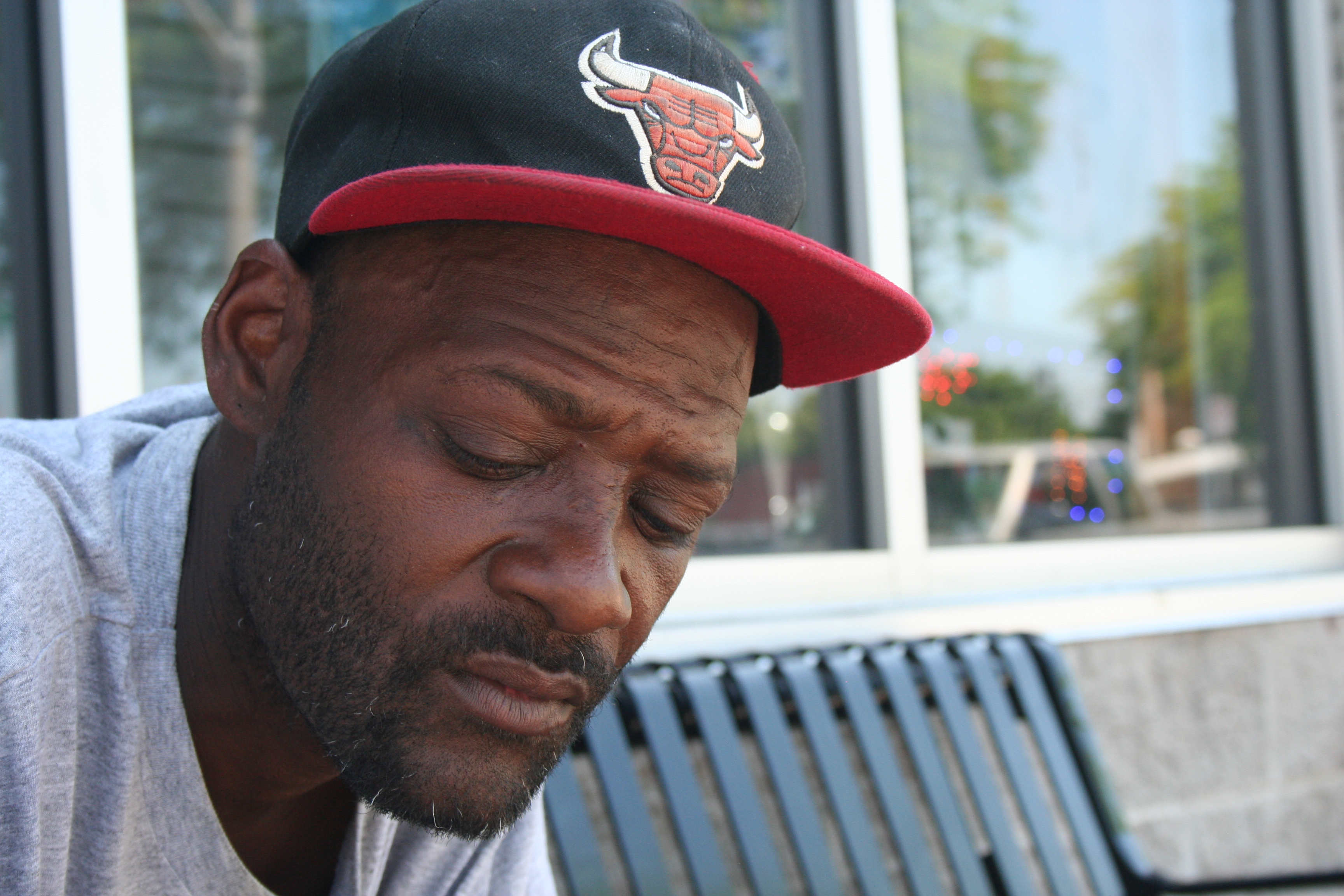 Coleone Davis canvasses the intersection at 35th and Burleigh, sign in hand, hoping for some extra cash. On this hot summer afternoon, Davis rests on a shaded bench in front of the eastbound stoplight of West Burleigh Street.

“You know how you fall sometimes? I want to get back up to where I was. And this ain’t me. This ain’t me,” says Davis, who has been out of regular work for about a month.

Davis was born in Dallas, Texas, but has “a lot of history” in Milwaukee. He had visited Milwaukee before moving to the city with his family in the early 90s. The 48-year-old Davis didn’t have much to say about Dallas except that it was “okay” and the economy was better, there.

“[Milwaukee’s] messed up and I don’t want to be here no more,” he says. “Shit, people [are] gettin’ killed every day up here, now.”

Davis, who has two grown children, says his older brother was in and out of the penitentiary most of his life; that wasn’t the path Davis wanted for himself. While still in Texas, Davis graduated high school and even took a couple years of college. “I’m just not no jail-house type person,” he says. “I ain’t with the jail stuff.”

As far as why that is, Davis isn’t sure. “It’s just been me,” he says. “I just did everything that I wanted to do and I didn’t mess up.”

Davis says that’s what he tried to be for his children, too. He was strict with his kids and made sure “they went to school and they were fed,” much like his upbringing. “I mean, I’m not the best father in the world but, yeah, I raised ‘em … It was hard.”

Both of them are still in Milwaukee. His son is “workin’ a little bit too” and his daughter is married. “I hope she’s doing well,” Davis says.

But he hasn’t seen either of them in a while. Davis was in Whitewater for about 10 months working at Generac Power Systems. Davis, who called himself “versatile” and has done a bit of everything, says he’s planning on heading back to Whitewater, Palmyra or Elkhorn in a couple weeks to look for more work; he hasn’t found any in Milwaukee.

“I ain’t found nothing steady,” says Davis, adding that he’s signed up with a temp agency, “but they just ain’t sending me out.”

It could be the lack of a working phone, the lack of transportation or the fact that Davis is “in-between housing” but the search, so far, has been fruitless.

A slick black car pulls up to the light blasting hip-hop. Davis tries the driver with his sign but quickly returns.

Davis wants to go back to school and is willing to learn more but he says it’s not that easy. “It’s been difficult because I’ve been in and out of housing and between girlfriends and stuff like that. I got locked up one time … not for long, though, but, you know.”

“It’s difficult living from place to place … it’s hard for a black dude out here,” says Davis. “I’ve got to keep money in my pocket, you know. It’s hard, man — it’s hard.”

And Davis, who used to be a supervisor at Sears before the Northridge Mall location closed, would rather be working. “When I do get on the job, I put 100 percent in it.” he says. “I like doing my job and I do it well.”

As far as the future goes, Davis prays every day for more than he has now. “All I want to do is just try to achieve everything that I can achieve,” he says. “That’s me; that’s the type of guy that I am.”

Did you find value in Coleone’s story? If so, please subscribe to our newsletter; we publish the story of a different Milwaukeean every week.