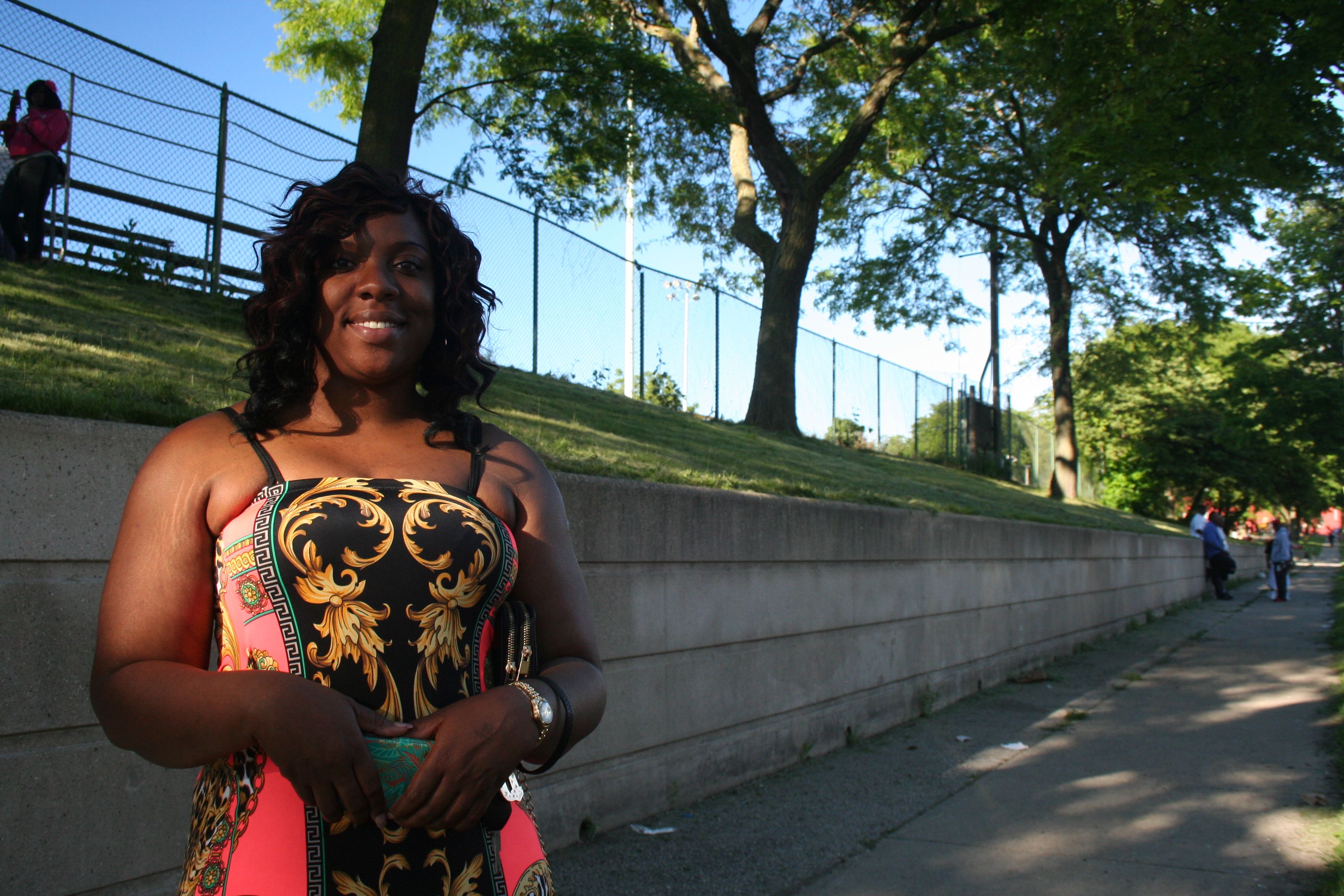 Darlene Rogers gracefully covers a stretch of sidewalk pavement followed by a brightly colored, flowing dress, the Martin Luther King Jr. Dr. Juneteenth Day celebration behind her. Rogers who grew up in the neighborhood points down the block to the house where she lived.

“I haven’t been down here in a couple years so it was nice to come out and see familiar faces,” she says calling the occasion “an out-of-body experience.” “It’s like the cycle just keeps repeatin’ itself.”

Rogers says it isn’t out of the ordinary for the children of families in the area to grow up and leave; sometimes they come back to visit, sometimes they don’t.

She calls nearby Clinton Rose Park “a very historical place,” recalling the children’s wading pool and the baseball and Pop Warner football games that used to take place there. Rogers says some people “stay away from what they call the ‘bad neighborhoods’” but that, in reality, “it’s usually pretty peaceful.” It all boils down to stereotypes, she says.

The second of three children between her mother and father, Rogers was the middle child in a broken family. Her mom worked in a factory and ran the household. Of her father, who now works in casino operations, Rogers says she wasn’t sure what he was doing at the time.

Then, they split; after that, she would visit her father but saw less of him. “When my parents were co-parenting, the lady that he was with, they were co-dependent upon each other.”

While together, they did “what natural parents do,” making sure the kids were back for curfew, didn’t talk to strangers and that she, as a young woman, wasn’t being ‘fast.’

“They were pretty stern,” she says. “My mom was always hard on me.”

Looking back, Rogers has a suspicion her mother pushed her because she knew Rogers could take it. And it worked. “I did everything she asked me to. I went to school, I didn’t have any children at a young age, I graduated from college, I went off to … be somebody.”

At the same time, Rogers said she needed every bit of what she got. “I was, like, the problem child,” she says. “I was the selfish one, I was the one that was thinkin’ the whole world was against me. So, it was a mixture of that.”

“As a child, my emotions were everywhere,” says Rogers.

Rogers attended Roosevelt Middle School and followed her mother to South Division for high school. She loved school because it was an escape. “School was fun. School was like my safe haven. I was naturally good at the books,” says Rogers.

After she graduated, Rogers went right into the service. “I always wanted to go into the military,” she says, adding she had an aunt who served as well.

“I was so ready to get away. Maybe it brought stability to my world or something,” Rogers says. “I thought it would just get me a little bit more grounded.”

Now, Rogers, who has a Bachelor’s degree in criminal justice and is still in the Army, is working at Potawatomi Casino as a security guard while finishing her Master’s at UWM. “I’ve been deployed a lot so it’s … easy — this is a piece of cake, it’s a walk in the park,” she says of the security job. “I like it ‘cause I still get to deal with people, deal with problems and stuff like that.”

“It was either that or bartending.”

But she doesn’t plan to be there for too long. “I want to open up my own juvenile outreach center,” says Rogers. “As children who have parents who are always working, we don’t know about the resources [that are available]. So, to us, it’s like we don’t have any resources. And, there are a lot of resources out here.”

“People have hope, just no passion,” she says, adding that the trick is to be able to follow through. “I want to teach ‘em how to start something and stick with it and finish it out and teach others how to do it.”

And, in terms of her own life, Rogers is looking forward to finishing strong. “I want a family of my own. I want to have children and a husband and, you know, just enjoy life,” she says.

“[I] just [want] to see what it is that I’m truly capable of.”
Did you find value in Darlene’s story? If so, please subscribe to our newsletter; we publish the story of a different Milwaukeean every week.