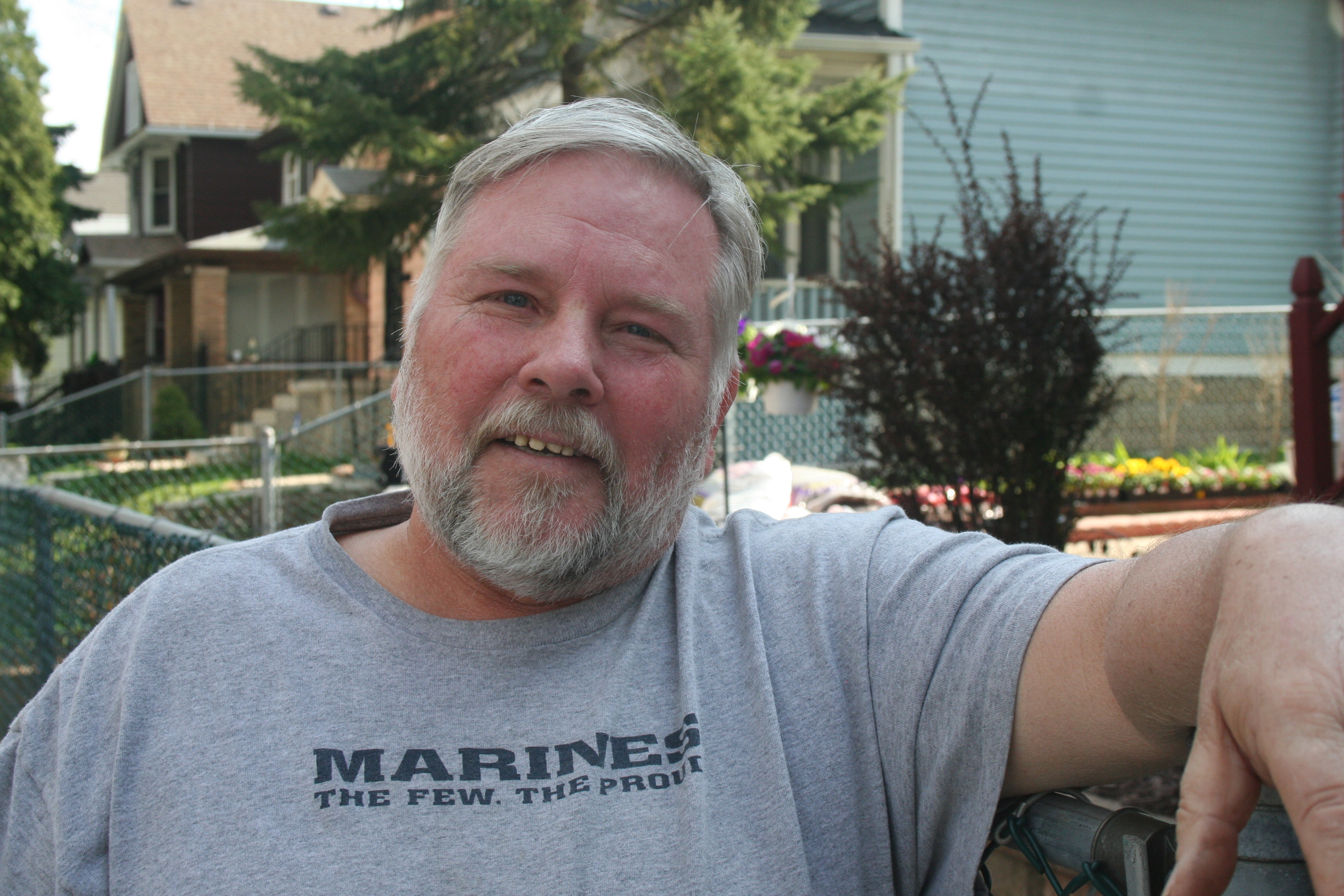 Joe Guentner leans against what might as well be a white picket fence in front of his home on South 21st Street. The 64-year-old Guentner, who was the oldest of eight, spent the majority of his childhood in Racine, where his mother was from.

“I lived on Lake Michigan … literally on the beach,” says Guentner of the place they lived in Racine. “We lived at that place for a number of years before we had to vacate and they tore it down.”

But Guentner doesn’t have many fond memories from his childhood. “My dad was an alcoholic,” he says. “Being an alcoholic … he was a violent type.”

At five years old, Guentner was enrolled as an extra hand for his father’s bait business. “I had to go seining to catch minnows and stuff like that, chubs, suckers, whatever.”

Some mornings they’d get going as early as 2 or 3 o’clock in the morning. After work, he’d go to school. After school, he wouldn’t come home until he had to, until his mother found him at the playground.

“My life was about work so I wanted to play,” says Guentner. “So, I insisted on a childhood until my mother hunted me down and whipped me all the way home.”

Guentner’s father died at 49 of cancer and the family moved to West Allis, where his mother remarried. Her new husband adopted all of the children and she adopted his. Guentner’s step-father didn’t like him all that much, but Guentner says the dislike wasn’t unjustified.

So, when Guentner, who was 21 and still living at home, couldn’t find a job, he decided to join the Marine Corps. He found a home there, a job that he loved — and he was good at it.

During the Vietnam era, Guentner was stationed in Okinawa, Japan, Cuba and California. Guentner never went to Vietnam, instead thriving as a Commanding General’s Inspector. Even though he served in some of the top commands and was even the NATO Embark Assistant — it was his duty to ready troops for deployment — Guentner only rose to the rank of Sergeant.

Part of his job was to assess his commanding officers. So, he didn’t make any friends. “I’d write them up and … well, it goes on a record, right? And it kind of makes them look bad.”

Eventually, the pestering he would inevitably end up taking in such a situation became harassment. “I wrote up a commanding officer who was a Lieutenant Colonel,” says Guentner. “He got fired … and then he became my boss.”

“I decided, right then and there, as much as I loved the Marine Corps and I loved my job, the politics of it all isn’t worth it. No matter what my rank would’ve been, I would still be talkin’ to Lieutenant Colonels and Majors as a junior officer and I’d have to go through the same thing the rest of my life.”

Guentner left the Marines in 1978. He moved to New Orleans with his wife — who he’d met at his last duty at Camp Legeune, North Carolina — and their two children at the time. Guentner ran a catering business, drove a taxi and worked on a push boat.

After two years, though, they moved back to Milwaukee. “There were some personal issues,” Guentner explains.

His past had finally caught up to him. “When you grow up in an abusive home … They say six out of ten kids who experience that kind of level of abuse actually tend to become abusers,” he says.

Three of Guentner’s brothers and two sisters were abusive — some spent time in jail, some cut it close. “But … I’m the only one who went to prison because I was extraordinarily abusive.”

“I had a felony for each one of the kids and a misdemeanor for bruising my wife on her arm,” he says. “I was abusive. And it was a number of years that I was abusive.”

His wife and three kids — two sons and a daughter — left and went back to North Carolina. Guentner was sentenced to almost 16 years in prison, of which he ended up serving six (with four years of parole and four years probation).

Guentner was 44 at the time but, while he was incarcerated, something happened. “I grew up,” he says. “I had to come to the conclusion that I can’t control everything and everybody.”

“See, abuse is about trying to control everybody else and I learned that you can’t do that — you can’t change people and make people do what you want [by] being a jerk, by being abusive. My dad did that to me and the other kids and we were scared of him. It wasn’t a loving place to live. And, I didn’t know anything about being a parent; the only thing I learned about being a parent was from my parents,” he says. “So, I was abusive and I hurt my kids and I chased them away — I chased my family away.”

Somewhere along the way, though, Guentner says, “God found me and I paid attention.” He became a born-again Christian but still found it hard to lead the life he wanted to. “I couldn’t break my habits — smoking weed, drinking, you name it. That just kind of added to the issues that I was having.”

“I ended up going to a new church and tried to let God fix me but I found out that there are some things I’m responsible for doing,” says Guentner. “God doesn’t stop you from doing bad.”

“You see, the thing is you’ve got to be in control of yourself. And, I was really out of control when I was abusing my kids. I was out of control.”

In prison, Guentner says he “realized what a woman was and how to respect her.” While he was in, he started writing to a pen pal, a woman from Hong Kong. Thirteen years later, they met and were married. That was five and a half years ago.

He says she’s just what he needed — a strong woman who keeps him accountable. “Success to me is being a good husband, being a good example to others … and learning how to be kind to others.”

Now, Guentner is a chaplain and deacon. “From time to time, I’ll go to prisons,” he says. “l sit down for four or five hours and meet with four or five guys independently and work with them.”

“That’s what my life is about, now. It’s about — instead of hurting people — serving people. And, there’s a great reward in serving people. It gives you a humble spirit, a humble attitude and it reminds you where you were.”

Did you find value in Joe’s story? If so, please subscribe to our newsletter; we publish the story of a different Milwaukeean every week.