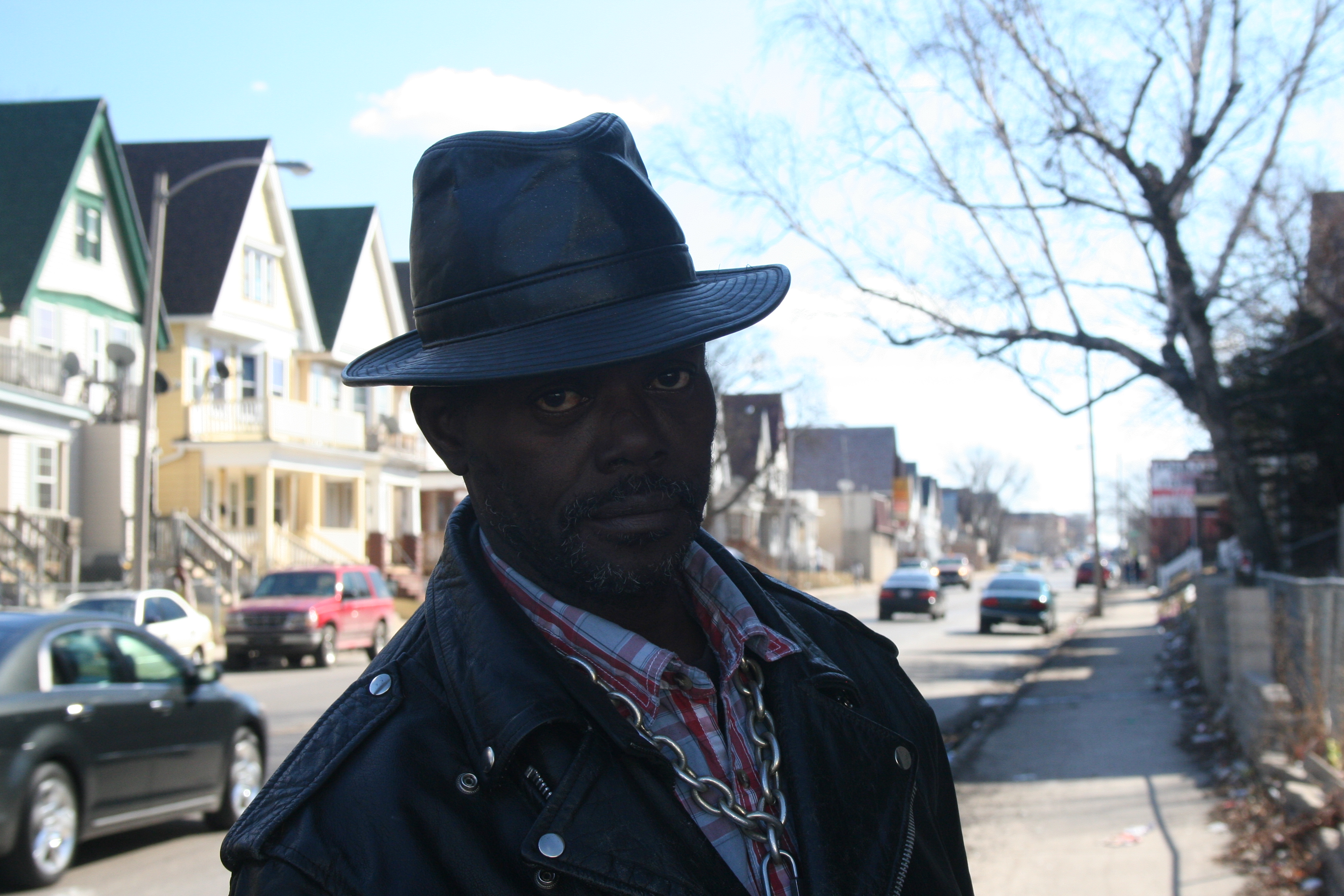 Ronald Franks dances, unafraid of prying eyes, on the corner of 35th and Clarke, twirling what he refers to as his “adrenaline stick,” a flexible, four-foot-long cane with a tassel on top. Franks, who sports a double-breasted leather coat and leather fedora, is no amateur when it comes to strutting his stuff.

The 60-year-old Franks has done many kinds of work in his life — he’s done roofing, “a little bit of light-weight mechanics” and he worked for the city of Milwaukee for a short while — but he says he’s gotten the most satisfaction out of dancing.

“Well, they call it exotic dancing, that’s the name for it. I did private parties, different stuff.”

“Then, for a while, [I] was in the dope trade,” says Franks. “It’s all you had — you’re black without an education, that’s what you got.”

Franks says his mother “jumped around” so every time they would go somewhere else he would have to go back to the beginning of the year and repeat grades. “At a certain point I just didn’t care, it wasn’t serving a purpose — I wasn’t learning nothing anyway,” he says.

And Franks, who’s spent time in California, Oklahoma, Texas and Illinois, doesn’t have much. “I pack light, save cash and go where I want to,” he says.

In fact, Franks, who has only made a total of $10,000 in taxable income during his life, is surprised — and even slightly upset — that he’s made it this far. “Pimp[ing], hustlin’, sellin’ dope, smokin’ dope, burglary — none of that shit has got retirement,” says Franks. “They told me I was gonna die the way I was living.”

But he didn’t. And living was not easy. “[There] wasn’t no time for socializing, I had to make sure I had somewhere to stay every day,” Franks says.

That didn’t leave much room for his two children. “I don’t claim them, they don’t claim me,” says Franks.

“My daughter’s mad at me ‘cause I left here when she was 3,” he says. “My son’s mad because when I took him to L.A. and moved there I moved him [in] with his grandmother … and hooked his mother up with somebody and he had a stepfather — good home — but I wasn’t there neither.”

They don’t know each other very well and that doesn’t seem like it’s going to change any time soon. “I mean, my daughter’s right here in this town, [I’ve] been here three years and I ain’t seen her and she ain’t seen me. We ain’t puttin’ forth no effort, bottom line.”

But he also said, “I can’t feel, I can’t care — if I do it would hurt. I can’t. I just have to look at the situation, deal with the situation, handle the situation, period. Anything past that is called emotional and that’s something that people that’s got time to feel have to do.”

“I don’t have time for that shit.”

In everything he’s done, Franks says he’s tried not to hurt other people. “I deal with situations,” he says. “That’s not my character to be harmful — I will, as a survival thing, because that’s all I know is the streets out here … But, I don’t go around pouncin’ and jackin’, robbin’ people.”

Does he ever wish his life would have been different? “Like I said, I ain’t got time for that.”

“I have to deal with reality and [the] reality is I’m stuck,” says Franks. “I’m stuck with this problem.”

He has no interest in faulting society or blaming his mother or father, though. “I have to deal with it,” he says, adding that, in that way, everyone is alone. “Even if I went with you every day of your life and tried to help you, still, you’ve got to deal with your life. No matter how much help you don’t have, you have to deal with it.”

Within Franks’ reality, though, there’s a little bit of extraordinary, too. “Everybody says I do beautiful stuff, I do beautiful poems, I do beautiful artwork,” he says. “I’m even designing a picture now that’s gonna draw itself with light.”

Franks explains it’s all about the thickness of the lines and how the light hits them. “I see it in my head already.”

Soon, though, Franks will be a little older and he’s worried he won’t be able to wear the clothes outfit that keeps him warm in winter — it’s about 35 pounds all together. “So, now, I’ve got a choice,” he says.

At least that way he’ll be able to do something — move or get a car — when he gets too old for the Wisconsin cold.

Where would he go? “Hell, the world is mine,” Franks says. “I don’t worry ‘bout that.”⬩