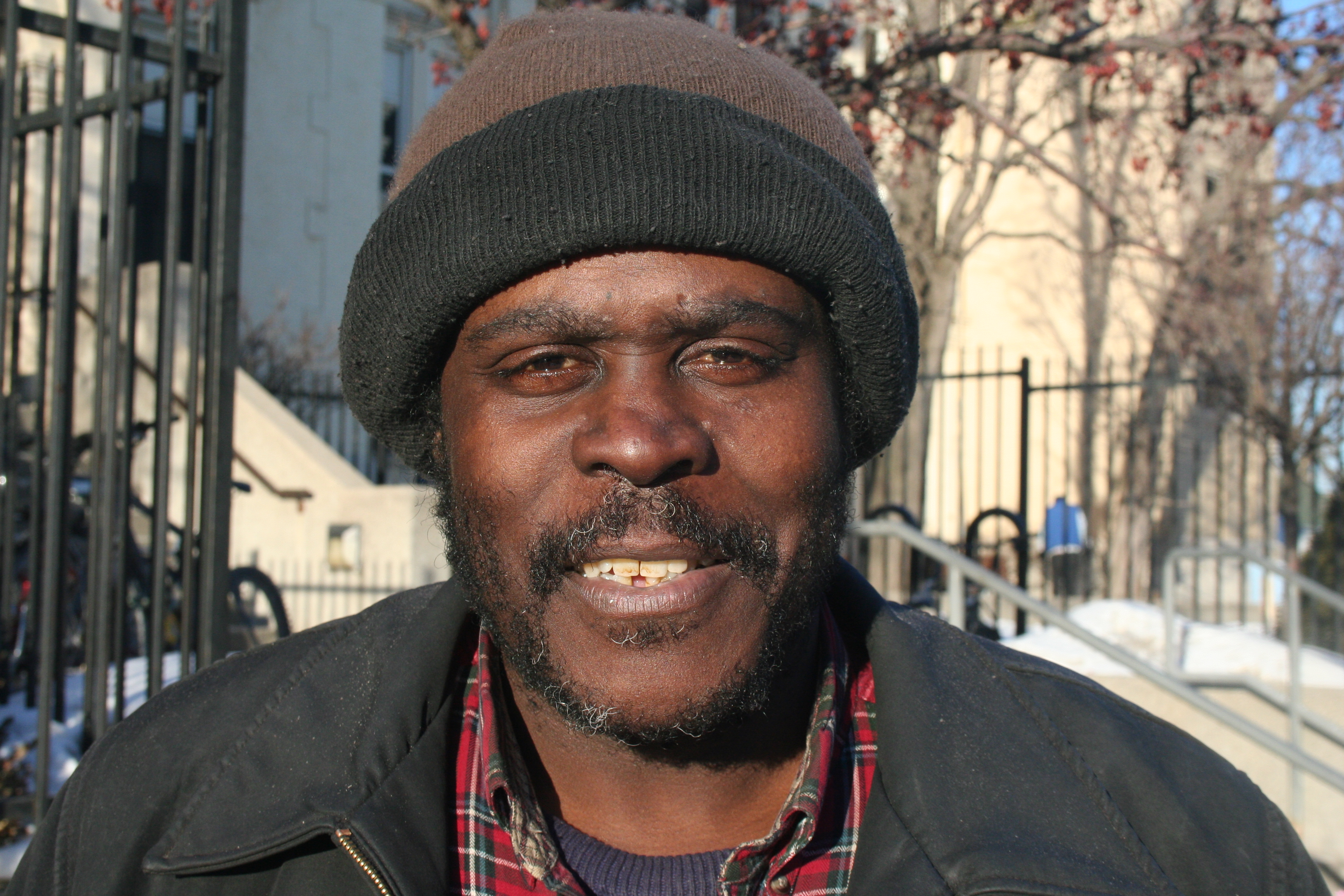 Preston Jones smokes a cigarette outside the Milwaukee Rescue Mission on W. Wells Street in the Marquette neighborhood. Expelling the smoke seems like a sacred ritual for Jones — he opens his mouth in a long “o” shape, exposing his slender, yellow-stained teeth, before breathing out.

Jones was “born and raised right here in Milwaukee” and, for the most part, hasn’t left. “I done been to Chicago before, I done been to Holly Springs, Mississippi, before — only one time to each one of them,” he says, though you wouldn’t know from hearing him talk — his voice is loud with a hint of southern drawl.

Jones, who says he’ll be 47 this year, grew up on the north side near 27th and Wisconsin, the second-youngest of 14.

“Ohhh, we came up real rough,” says Jones. “But my mother and father have always kept a job and they made sure that we had somethin’ a eat each and every day.”

His father was a welder and Jones’ mother worked at “a nursin’ home or something like that.”

He says she always had something “cooked on the stove” — in case any of her kids were hungry they could come by the house. “She was educated, she knew how to read, write, spell, do math work, stuff like that. She was real good at it too.”

But there was another side to his mother, too, says Jones. He ended up dropping out of high school in 11th grade because he couldn’t get free lunch and his mother, who had divorced his father, was struggling with alcoholism and “wouldn’t sign the papers.”

“She was a bad alcoholic,” says Jones. “And, basically, my education wasn’t all that good but … I get by.”

Jones hasn’t worked in some time, though. “I’m a say I ain’t had no work in about, like, oooh, three, four, five, six years,” he says after a long sigh. He’s worked as a stock boy, has helped lay concrete and does temp work “every now and then.”

It’s not that Jones doesn’t want to work — “I’d really like to be a janitor,” he says — but he knows his lack of education is a barrier. “I’m very healthy, I have no illness and I can do some type of work. It’s just that, when it comes to education, I ain’t got it on paper.”

So, Jones has reserved himself to waiting on unemployment that doesn’t seem like it’s on its way. He gets some Social Security, which he accused his brother of stealing. “He leaves me a little money in my account, just a little bit — but it’s never enough for me to really, you know, get through the whole month.”

He’s been staying at the Rescue Mission for a few months, now, “cause I don’t have enough money to pay rent and all a that stuff.”

“It’s nice here, it’s nice here,” Jones says. “They feed three meals a day, they give you a warm bed to sleep, you can shower, you can use soap and toothpaste to take a shave and all a that or you can watch TV and programs … and they even help you get a job here, too”

But it doesn’t sound like he’s counting on that. Jones makes a reference to reincarnation and it seems he views being born again as his only chance at the life he’d like.

“I always wanted to be rich,” Jones says. If he had money, he would “buy a house, a car, motorcycle, speed boat, clothes, furniture, food, uh, go and get me a nice little girl, give her some money, buy her some clothes and jewelry, a car, and settle down with her — that’s what I really want,” he says. “That’s what I really want.”

“I’ve got my work cut out for me the next time around.”

Did you find value in Preston’s story? If so, please subscribe to our newsletter; we publish the story of a different Milwaukeean every week.