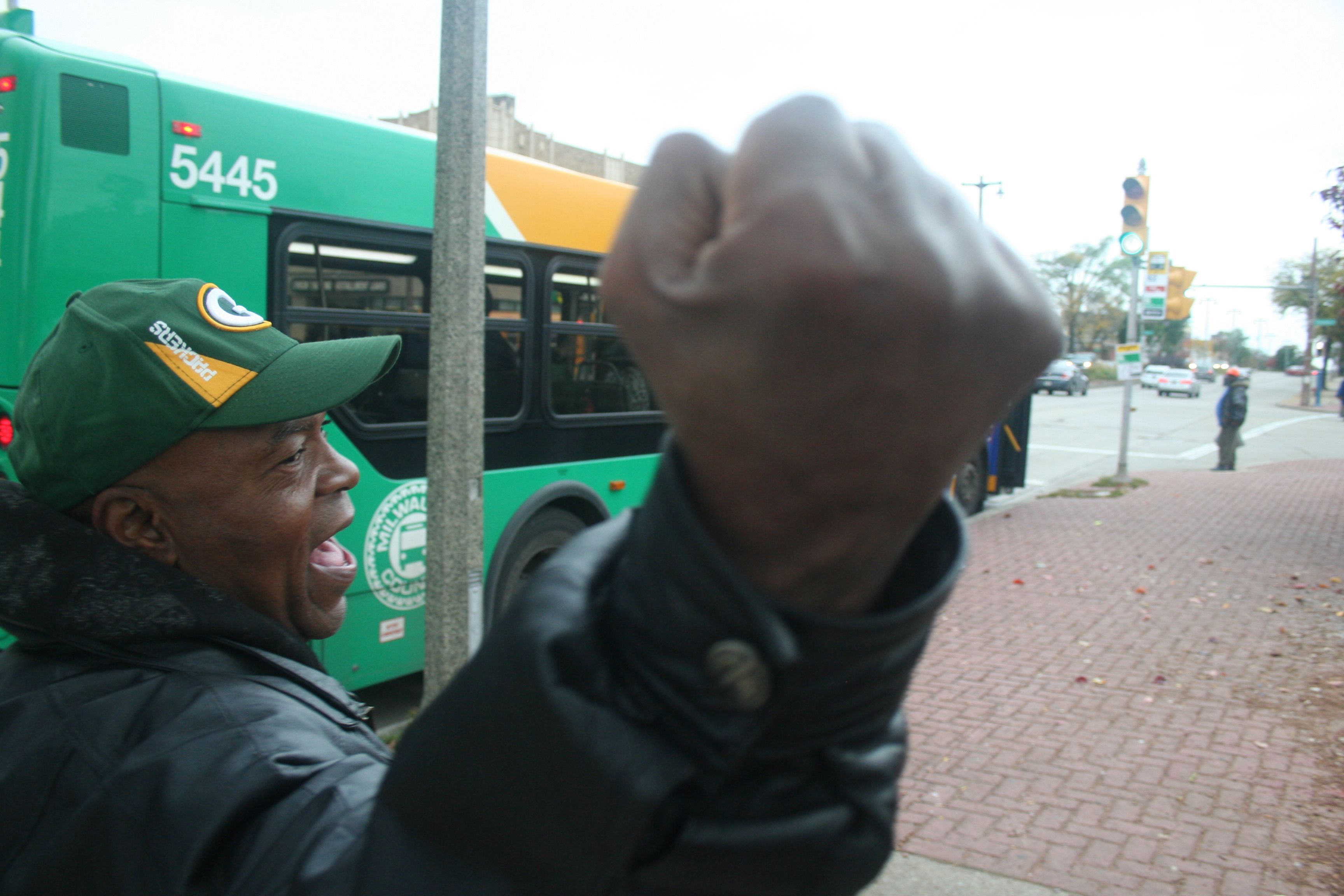 Steven Davis stops to ask for a dollar near the corner of Capitol and Teutonia. He just got a job at Burger King, he says, but, today, he doesn’t have enough for the bus. “Just about three hours ago they called me on my phone,” says Davis. “At least I’m tryin’.”

Davis sports a worn black leather jacket and a Green Bay Packers cap, despite the fact that his family is from Minnesota – he’s been in Milwaukee for about a year-and-a-half. “Oh, it’s beautiful; it’s different,” he says of his home state. Davis gestures to the corner where some young men are milling about. “They don’t play that in Minnesota. You go to school and you work and they don’t hang no dudes like this on the corner – you’ll never see that. Na, they do not play that.”

“And the streets are clean. This is in Milwaukee, Chicago; look at how dirty these streets are.”

What’s his experience here been like, so far? “Well, in my neighborhood, some younger people get in trouble and they do little stuff that don’t even, you know, make sense,” he says. “But we’re trying to straighten that out, man, because, the older guys in Milwaukee, they go to work and they respect everybody. But the younger guys out here on the streets, man, we’re trying to pull them together to stop all of this violence because those are the main ones; teenagers, stuff like that – those are the ones who’re causing trouble on the north side of Milwaukee.”

“I get up at six o’clock in the morning, go to work – every morning – until seven o’clock at night…all I ever did in my life was work.”

Personally, Davis, who was out of work for about two months before landing the spot at Burger King but still did some temporary jobs here and there, says he enjoys working. “I get up at six o’clock in the morning, go to work – every morning – until seven o’clock at night.”

“I like to get up early in the morning and go look for it.”

And Davis, who’s been working since he was 16-years-old has done a little bit of everything, over the years. “Aw, construction…all kind of work, man. I’ve been workin’ – all I ever did in my life was work.”

Though it sounds like, just maybe, Davis could use a break, he says he’s not quite ready yet. “I know; at some point,” he says. “But I like workin’ because it keeps me, you know, occupied…these are workin’ hands – rough, all my life.”

But, when asked what he’s looking forward to, Davis’ aspirations betray him. “Prolly remarrying my wife and havin’ a good life and goin’ on a vacation,” he says, laughing, as he walks away.

Did you find value in Steven’s story? If so, please subscribe to our newsletter; we publish the story of a different Milwaukeean every week.