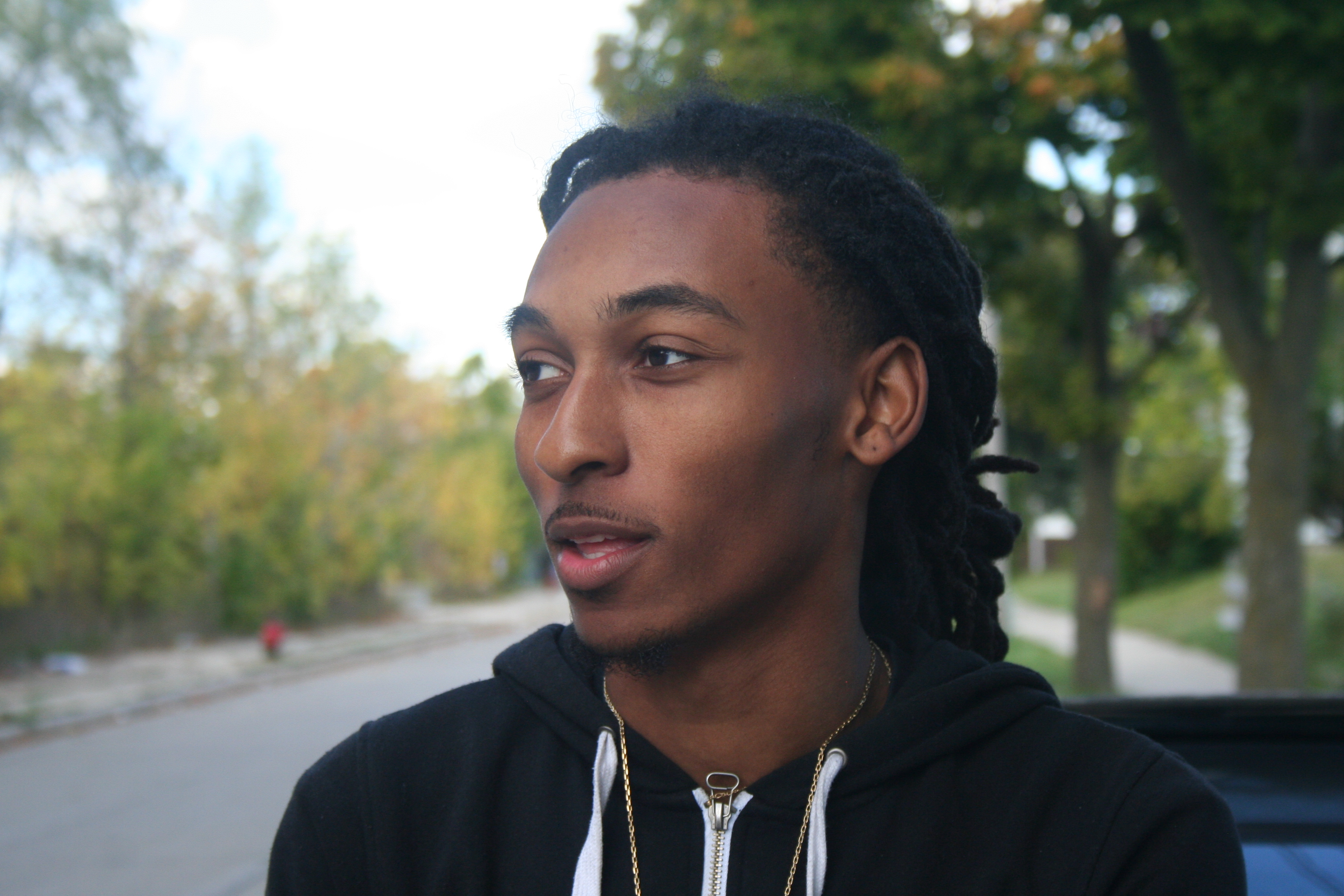 Davontae Thompson leans against the trunk of his electric blue Chevy Impala, posing for pictures with a friend.

Thompson, who grew up in the neighborhood and has lived in the area for 13 or 14 years, says his childhood was a bit of a mixed bag. “It was good but it was a little bit…everybody wasn’t getting shot and killed every day but lot of fights, lot of robbery, a lot going on. Car accidents, cars stolen, radios stolen, windows busted, a lot of kids being bad for no reason. But it was alright.”

“The good part was gettin’ to know everybody,” says Thompson.

“But if you don’t know nobody like that they’ll probably…steal a lot from you, jump you too.”

Although, Thompson says that’s never something he’s had to worry about. “I don’t know, stuff just be fun to me cause I don’t never end up on the bad side – I’m never the one getting beat up and all that.”

The 20-year-old Thompson, who has three siblings, talked about his parents, too. “My dad, I don’t know. My momma, she’s good; she made things work.”

“He had left; he had left when I was like 13. It was over when I was 13, he was outta there,” says Thompson. “He was in and out… Like, he would be there and then, like, three months later he’d come back again but then he just stopped showing up.”

“He just left. It was sad but…cause everybody else got their dad and money and stuff like that and…get help from their dad and I didn’t, but. So, it just made me just have to do stuff on my own more often.”

After graduating from Pulaski High School, Thompson spent some time at MATC but eventually decided to drop out. “I didn’t know what I wanted to do and I was like, ‘I’m wasting money just being here,’” he says. “I was just doing it cause people say it’s good to do. I was like, ‘Maybe I should leave and figure out what I want first.’”

He hasn’t figured out what that is, yet, though. “Today I was thinking about a mechanic. Tomorrow it’ll be a whole ‘nother story; tomorrow I’ll probably think about something else. I’m always thinking about what I want to be but it’s always different things.”

“When I was a little kid, I wanted to be like a rapper or basketball player or something – that’s probably what messed my focus up. I should have picked something else,” says Thompson. “While I was trying to play ball and do all that stuff, I could have been doing other stuff – I could’ve been getting a lot of money instead of playin’ basketball at the park…That wasted my time.”

But Thompson hasn’t lost hope; he still has plans for the future and, eventually, wants to have a family of his own. “I’m gonna go back to school, though, when I figure out what I want to be and what’s gonna keep me financially stable,” he said.

“Then I gotta get this (car) fixed some more,” says Thompson, lamenting the constant repairs that always just seem to pop up. “Every time you think it’s okay, you go in again, they’re, ‘Well, here’s the problem.’ Then you get the, ‘Aww, man,’ get the sweatin’. ‘How much, man? Please don’t say five hundred; as long as it ain’t five hundred.’ Once they hit that four hundred, three hundred, you get the stomach achin’.”

“Every week, back-to-back, rippin’ the pockets off.”

Did you find value in Davontae’s story? If so, please subscribe to our newsletter; we publish the story of a different Milwaukeean every week.