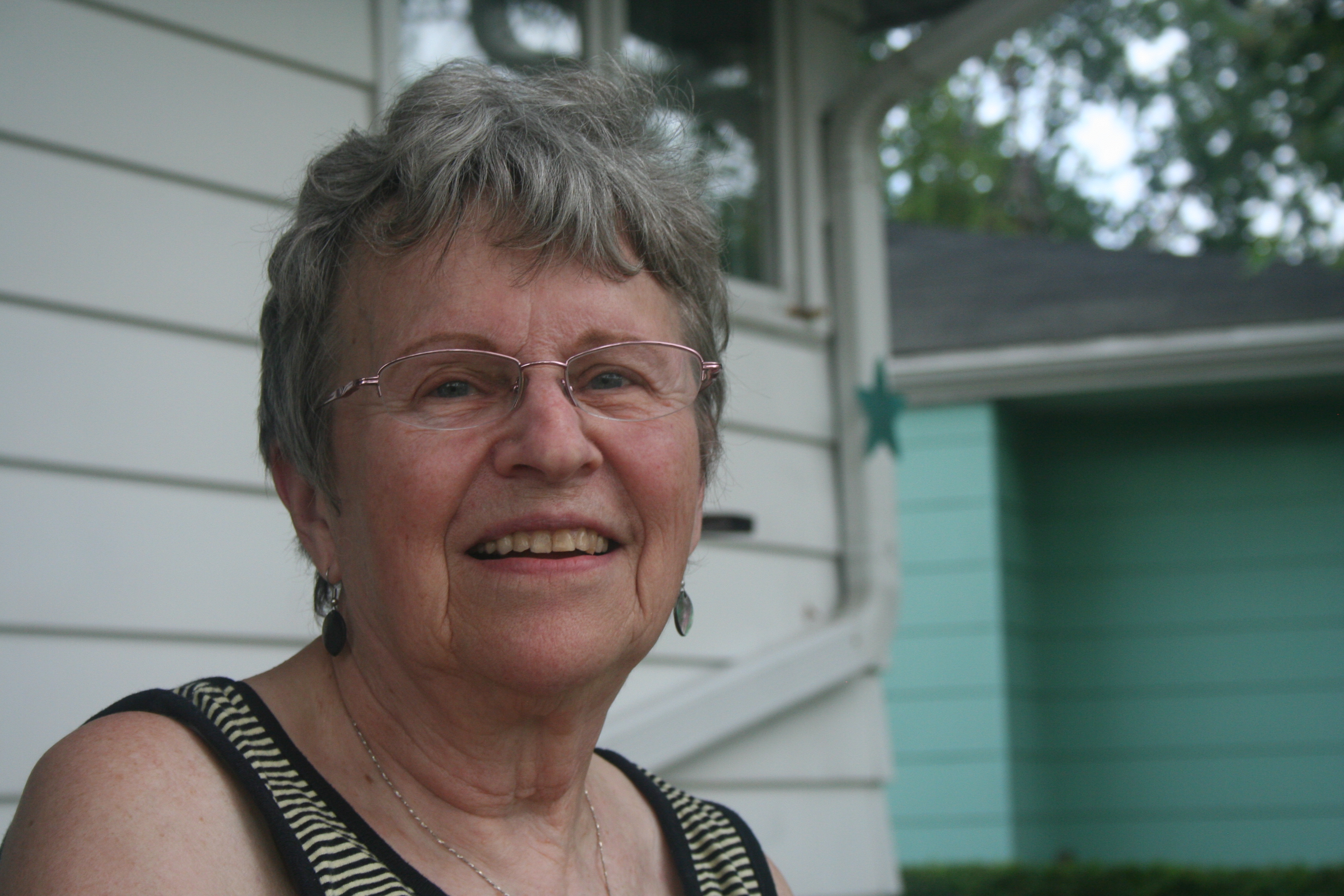 Marilyn Radke sweeps already-cut grass into piles that litter the street in front of the place she’s called home for more than 50 years.

But she didn’t grow up in Graceland. “No, no, this was probably all farmland,” says Radke. She spent most of her childhood, until she was 15, in a small flat near 27th & Lisbon.

“It was 1711 N. 28th so that was just a little block up and a little block over – and I think we were the attic, practically; there wasn’t much of an attic above us – no central heat, no running water – and it was hot up there. Now, we had these stoves that we had to fill up with coal to heat the darn thing. You could go downstairs and light the pilot light and get hot water on washing day and bath day. The rent was cheap.”

And, price was a big factor, at the time. “I was born in ’35,” says Radke. “It was at the end of The Depression – that’s why we lived in a cheap flat without central heat.”

What was it like growing up at that time? “Well, when you’re a kid, you don’t know anything different and I knew kids in my class that had bigger families that were…they were even – if you wanna call it poor – more poor than what my folks were.”

And Radke’s family was as small as it could be – she’s an only child. She says, looking back, though, it really wasn’t that bad because she was only “by herself” until school started and she had plenty of imagination to fill the summer months. “[I] played under the dining room table,” says Radke. “Then you put a blanket over it so you think, you know, you were in a little house.”

Over the years, Radke kept tabs on that little place that marked the majority of her pre-adult life. “Since then, the house has been lived in by some people who didn’t keep it up; they left in ’86. And, then, I went by there one day and I saw the windows were boarded up…you could see the black; it must have caught fire. So, then, I drove by it every so often, you know. Then, just a little while back, now, not long at all ago…and the house was gone, they flattened it.”

In a way, that flat and the times surrounding it perfectly explain why Radke’s still in the same place where her and her husband spent the greater part of the last quarter-century. “I’m not one for movin’ around,” she says. “I’m not even one for taking vacations – they cost too much money. My folks never went anywhere…so, I never missed ‘em (vacations) but I didn’t really have anything to miss.”

It was during Radke’s high school years at Milwaukee Lutheran that she met her future husband, Rick. Though her parents told her she could go to college if she wanted, Radke decided to take the civil service test at the end of her senior year and ended up working six years at City Hall.

“By then, my husband had gone to college and promised ROTC for two years of Army. So, then, my daughter was born down in Missouri – we lived down there for two years. Then, we came up here and he had to start teaching school. Well, he came out at a bad time (in February)…so, it wasn’t till the next September that he got a regular job.”

Radke had a son, as well, and didn’t work again until 1975 when the kids were ready for high school. “We were gonna send the kids to Lutheran High, which meant we’d have to pay tuition. And it’s not that we couldn’t have made it or something but I remember my daughter’s friend, her mom, who worked at the [previous factory on lower Mill Road], she said, I said, ‘Oh, I should get a little job or something, you know, to pay for tuition.’ And she said, ‘Why don’t you come over there? You know that’s what they’re building over there,’” Radke says, referring to the factory across the way on 60th. “So, by accident. And I was sort of a chicken. I put on my application that I…office or factory, and I think I put office first and nobody called me. A week later she says, ‘Didn’t they hire you?’ And I said, ‘No.’ She said, ‘You just go over there and you tell them you want a job; in the factory.’ So, I did that and the next day I started work.”

Having never done factory work, Radke didn’t know what to expect; it didn’t take her long to find out. “I only worked a few weeks and they laid a bunch of us off. So, the next fall, then, I worked two months and they laid me off.”

Now, Radke’s son lives in Dallas. “Him being so far away, even now, I’ll talk to some gals whose sons call them like every week. And then some, like mine, that call whenever, once in a great while unless you call them. But they’re busy so that’s alright.”

Her daughter, on the other hand, lives just down the block, which can be convenient, at times. “Now,” says Radke rather matter-of-factly, “when I have too much of something I just ship it down there.”

About seven years ago, Radke’s husband passed away from cancer. A number of her female friends and old classmates have experienced the same, all outliving their spouses.

But, unlike some of them who have been able to pay for help around the garden or house, Radke, despite a bad knee and her advancing age, dismisses the notion that anybody but her would be “picking up [her] dirt”. “I like to do my own scrubbing and I like to get down like my mom, my mom used to do, and get in the corners. Again, I’m old-fashioned.”

What does she miss the most? “Just the fact that he’s there, I guess,” she says. “His bag was reading. He was an all-around person and I don’t think I realized how all-around he was.”

Radke says the first time she saw her husband through someone else’s eyes was during a Christmas party at his first school. “That’s the first time I really realized what he was like to someone else. Because they said, ‘Oh, you two are such a good couple, together,’ – they thought we complemented each other. And they said, ‘And, Rick, he knows so much.’”

She recalls that he almost didn’t make it into college and, though he was accepted, it was on a probationary basis. But, by the end, he had graduated with three majors. “With words, it was like a game for me. He knew every word you could ever tell him, he knew the meaning of so many…I’d say to him, ‘Just think of the stuff you know.’ And I’d try to find a word that was really weird and odd and then I’d say, ‘What’s the meaning?’ – I knew the meaning – and he always knew. He said, ‘No, no, no, just think about all the things I don’t know.’ That’s who he was.”

“He either made close friends with somebody a lot older and more learned than he or a lot younger. He had practice teachers under him all the time.”

She mentions another friend and professor who she says “had the brains” – he teaches at the University of Maryland – and her surprise at how highly he spoke of Rick. “After he passed away, I was really surprised to hear Jerry say all that he knew about this, that and the other thing, especially the photography, he had learned from my husband. And I thought, ‘Oh, my gosh,’ you know? So, see, other people’s opinion of him was much different than mine; we met when we were 15 and he never went out with anybody else and I really didn’t either. And he was very quiet and reserved and I was reserved but not so quiet.”

“I didn’t come from specialness, myself, but my husband was very interested in artwork, books, theater, all that kind of thing, which sort of rubbed off on me, then, too,” says Radke. “What do they say? Still waters run deep.”

“All I intend to do is live every day until I get up there.”

Did you find value in Marilyn’s story? If so, please subscribe to our newsletter; we publish the story of a different Milwaukeean every week.