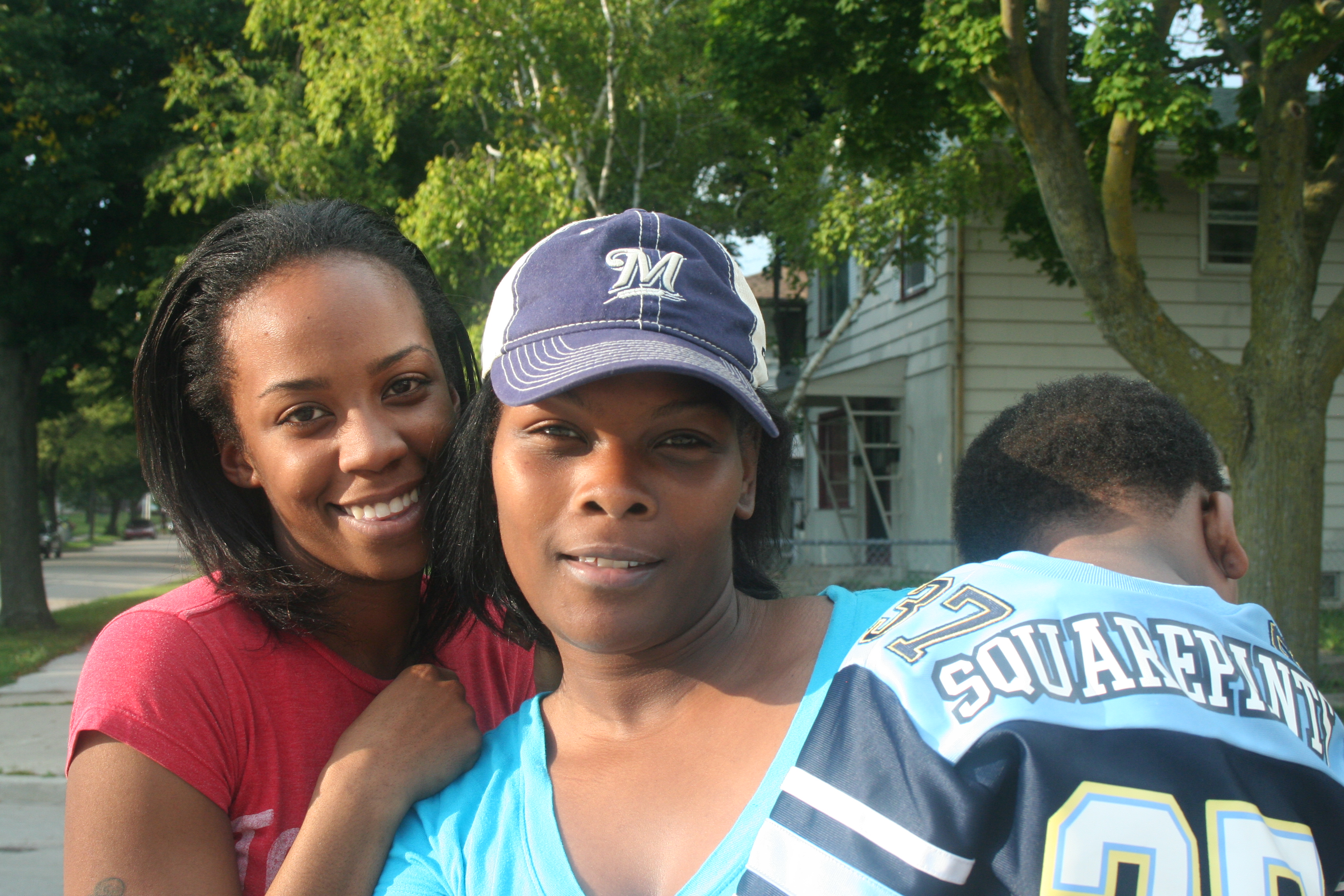 Erika Harvey and Precious Taylor have been neighbors for about a year on the 5600 block of N. 61st Street on Milwaukee’s northwest side.

Both grew up on Milwaukee’s near-west side and said the experience wasn’t necessarily easy. “You had your hard days but then you had your good days,” says Harvey.

The 32-year-old Taylor, who graduated from Sanford Brown University with a degree as a medical assistant, talked particularly about the lack of access to quality schooling in the city. “You have to live in a certain area to go to a good school. I went to Nicolet but I had to use somebody’s address just to get in there.”

Taylor, who has three children of her own, said she isn’t necessarily proud that she had to lie about where she lived but that she did what she had to. “It was really nice; I was able to get my education and I think it was sad that I had to use somebody’s address…but it was worth it.”

Harvey and Taylor have been here their entire lives but they both talk about wanting to get out of Milwaukee. For both women, violence and access to opportunities are factors as they contemplate relocation.

And that’s what they worry about, that, one day, the violence will randomly find them. “It’s like somebody will drive past you and shoot just because they want to,” says Harvey. “It used to be fight, fight, fight; everybody wanted to fight – there were a whole lot of fights back a couple years ago… Now, people are getting guns, it’s easier to get guns…they, instantly, go straight to ‘I’m gonna kill ‘em.’”

Echoing Harvey, Taylor says she rarely feels safe. “I walk and people pull their car up and I’m not sure what they’re gonna do and it’s just like – like I said, even in the daytime – it’s just sad.”

And, as a mother, Taylor doesn’t only have to think about keeping herself safe but about the safety of her kids, as well. “They don’t understand why I won’t let them go outside but it’s just not… I know it’s not safe anywhere but here it’s just gotten worse.”

The women attributed some of the violence and crime to the effect of drugs but, in the end, they determined it goes much deeper than that.

“It starts out with the economy,” says Taylor. “The economy, right now, is so bad so people can’t afford to eat or clothe themselves. They’re doing what they have to do.”

“Like this Family Dollar, right here,” Harvey says, pointing to the building at 6000 W. Silver Spring. “They get broken into every other day…and then when we say ‘What did they come in here for?’ [the manager] said ‘They didn’t take nothing but food and ice cream.’

“It’s hard out here…they’re taking stuff that they need. It’s hard and, people, they’re not trying to help. They’re cutting food stamps…but they’re giving stuff to the wrong people. Like, you’ve got ten kids at home, you get $1000 worth of food stamps. When, if you ain’t got no kids at home, you’ve gotta be homeless to get food stamps. Like, well, I work 40 hours a week, my rent is $600 and I can’t get food stamps? That kind of stuff will have you breaking into somebody’s store stealin’ food.”

While Harvey and Taylor don’t have much hope that things will turn around any time soon, they seem to believe that, some day, it might. In fact, it’s what keeps Taylor going day in and day out. “Basically,” she says, “trying to see my kids grow up and not have to struggle.”

Did you find value in Precious and Erika’s story? If so, please subscribe to our newsletter; we publish the story of a different Milwaukeean every week.