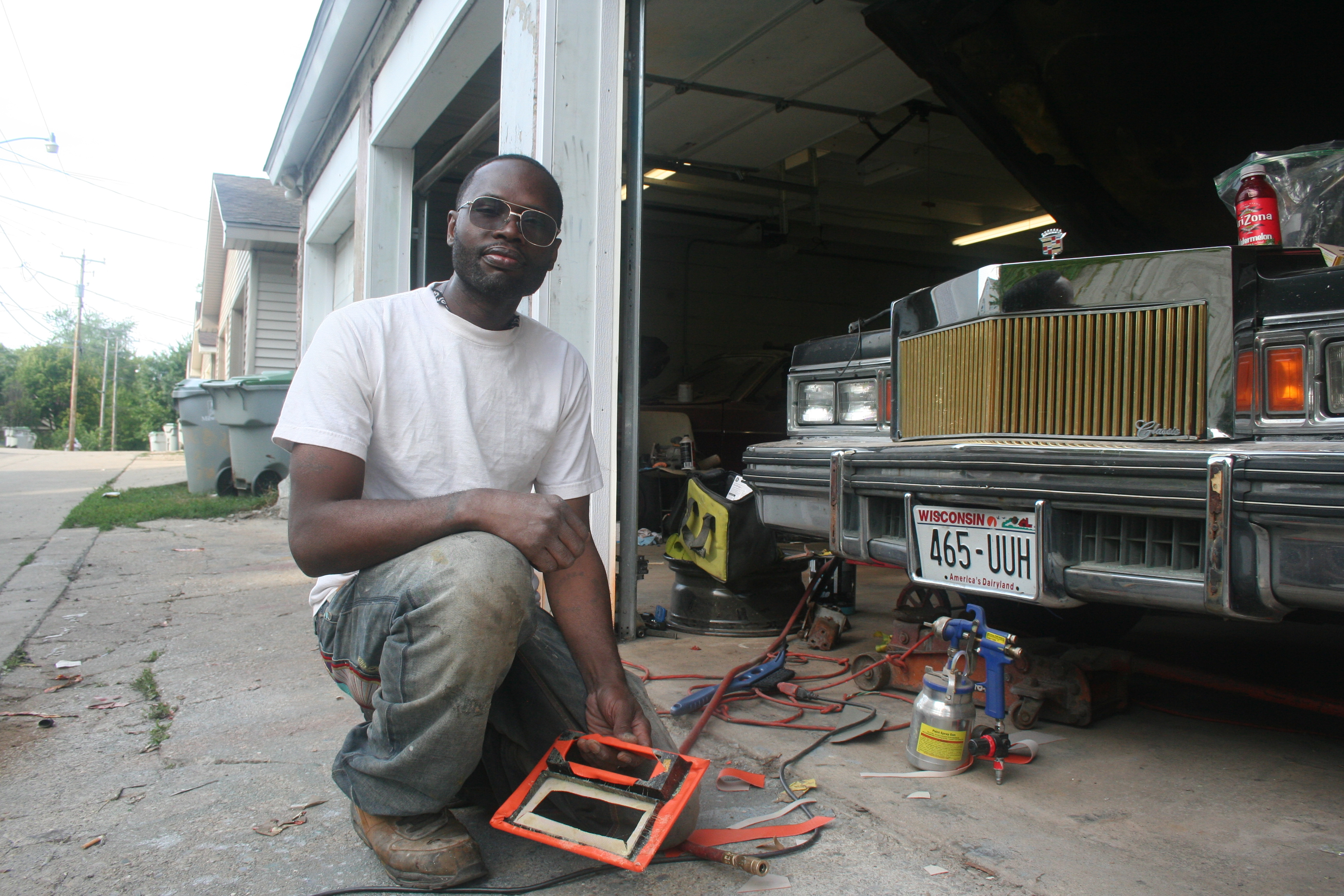 Aaron Wood sits in an alley near 2nd and Ring, just outside his garage, working on a friend’s car.

Doing bodywork and car interiors are just a couple of Wood’s many hobbies. But, when it comes to work, when it comes to paying the bills, Wood found something that worked and stayed with it. “I’ve been at the company I’m at now…for like 16 years,” he says.

“After high school, I didn’t go to college or nothing, I just was working – I held a job down at a meat packing company for, like, five years. Then I, uh, quit that trying to be a drug dealer or something like that and went to prison for a couple of years and, you know, I realized that ain’t for me.”

Though Wood eventually came to that conclusion for himself, he says, at the time, he was just looking for something better than a nine-to-five. “I guess [I was] just trying to figure out the fast way to get money, you know what I’m saying; an easier way. I had already had a job and I ended up quittin’ a job; I should’ve never quit the job. That’s where I made my biggest mistake, right there.”

Now, Wood works as a machine operator. He’ll tell you he doesn’t mind the security, at all. “I had that job ever since I got out of prison so that was like, ‘I’m holding on to that job for dear life.’”

The road definitely wasn’t an easy one, though. “I had got the job and I had been there for two years – well, I didn’t even have the job; I was working there through a temp agency… and they were talking about hiring me. So, they had a decision to hire me or this other guy. And the crazy thing about it was I had all the experience, the other guy didn’t, but they didn’t hire me.”

And, while Wood says he understands why they didn’t hire him, it still stung. “There’s a whole bunch of unknowns. You know, he’s got this record, this and that… so, I was really down about it cause I was, you know, I was really going for the job and I was dedicated to it.”

That same company had another business up the road, though – one that dealt with rodents and insecticides. Wood didn’t want to go but, with a little prodding from his wife and assurances that he’d be hired after 90 days, he made the move. “I went, reluctantly. I went and I worked my 90 days and they hadn’t hired me so I was gonna quit again,” says Wood. “So, I told them, ‘Well, I really need a job, I need some benefits for my kids and stuff, and you guys ain’t hiring me – you wasn’t keeping to your word – so, I need to go out and look for me a job.’”

And look he did. It didn’t take long before Wood found another company who said they would hire him; he was scheduled for orientation the following Wednesday. It didn’t take long for the news to get out. “So, you know, [my bosses] went back, talking about it… the very next week on that Tuesday they called me in the office and decided they wanted to keep me.”

Wood finally had the full-time, stable employment he’d been seeking. This time, it didn’t take long for opportunity to knock again. About a year after being hired, his boss from the first business – the one that had chosen the other man, instead – came to him in need of help. They hadn’t been able to hire the other guy because he didn’t pass a drug test and they wanted Wood back.

But, though they made an offer, Wood declined. A couple months later he declined another offer from them. Why did he keep turning them down? “Because I was happy where I was and I felt like they had an opportunity to keep me over there, you know what I’m saying?”

Eventually, though, Wood says the opportunity was too good to pass up. “They finally got the offer right, I talked to my wife and my family, so I ended up going there. I’ve been there ever since.”

So, in the end, Wood’s hard work and determination paid off. Sometimes, it’s like that; sometimes, it just takes time. “You’ve just got to be patient and just keep at it, you know… that’s all you can do,” says Wood. “It’s funny how things work out; you never know how things will work out.”

And Wood has experienced uncertainty in more than just his professional life. Wood, who has five children, struggles daily to be the father his children need. “I have two by my wife, my oldest two kids by another lady, then I have one that my wife don’t never want me to mention.”

Wood was, as he explains it, “with another young lady” while married. As a result, his daughter, the youngest of all his children, was born. As one might imagine, the situation has created some strife in the family.

“Things happen. Sometimes, I even be cryin’ about it, man, it hurts me so bad. And the crazy thing about it is, like I told my other kids – cause all my kids are grown except my youngest son, who’s 9, and her… but I talk to them and, you know, I said, ‘All you guys, I went on heart with you – I didn’t have no blood tests or nothing. I had two blood tests for this little girl and I just can’t turn my back on her, you know?’ I just can’t do it.”

Regardless of how difficult the situation might be, though, Wood says he feels a strong responsibility to his kids because of his situation growing up. “I took care of all my kids cause my father wasn’t there for me so…I had to make it my business.”

While Wood understands his wife’s feelings, he tries to remind her that they aren’t the only ones; things like this happen to other people, too. “To me, it’s life,” he says. “You know, we’ve both made mistakes along the way.”

Despite everything that happened, Wood refused to shy away from the truth. “After the girl had the baby – the baby was probably about six months – my wife didn’t know. And I stepped up again, I admit I wasn’t being a man about it; I went and told her. I went and told her. I had moved out for like 90 days but it was just eating me up, I had to let her know what was going on.”

“And I told her, ‘You know, there’s a lot of men who would die with that…they would never tell.’”

Wood says honesty is important to him but that it gets difficult when his wife doesn’t want him to see the baby or have her at their house. “I try to be honest but, sometimes, I find myself having to sneak and do stuff for my daughter. But the whole thing is, I don’t want to sneak.”

Looking forward, Wood says he doesn’t want too much; all he wants is to be happy. “My future is really just trying to take care of my kids and keep on working as long as I can, you know. That’s all I’m concerned about. Be happy and maybe my wife can be happy with me – I’m real simple.”

Did you find value in Aaron’s story? If so, please subscribe to our newsletter; we publish the story of a different Milwaukeean every week.