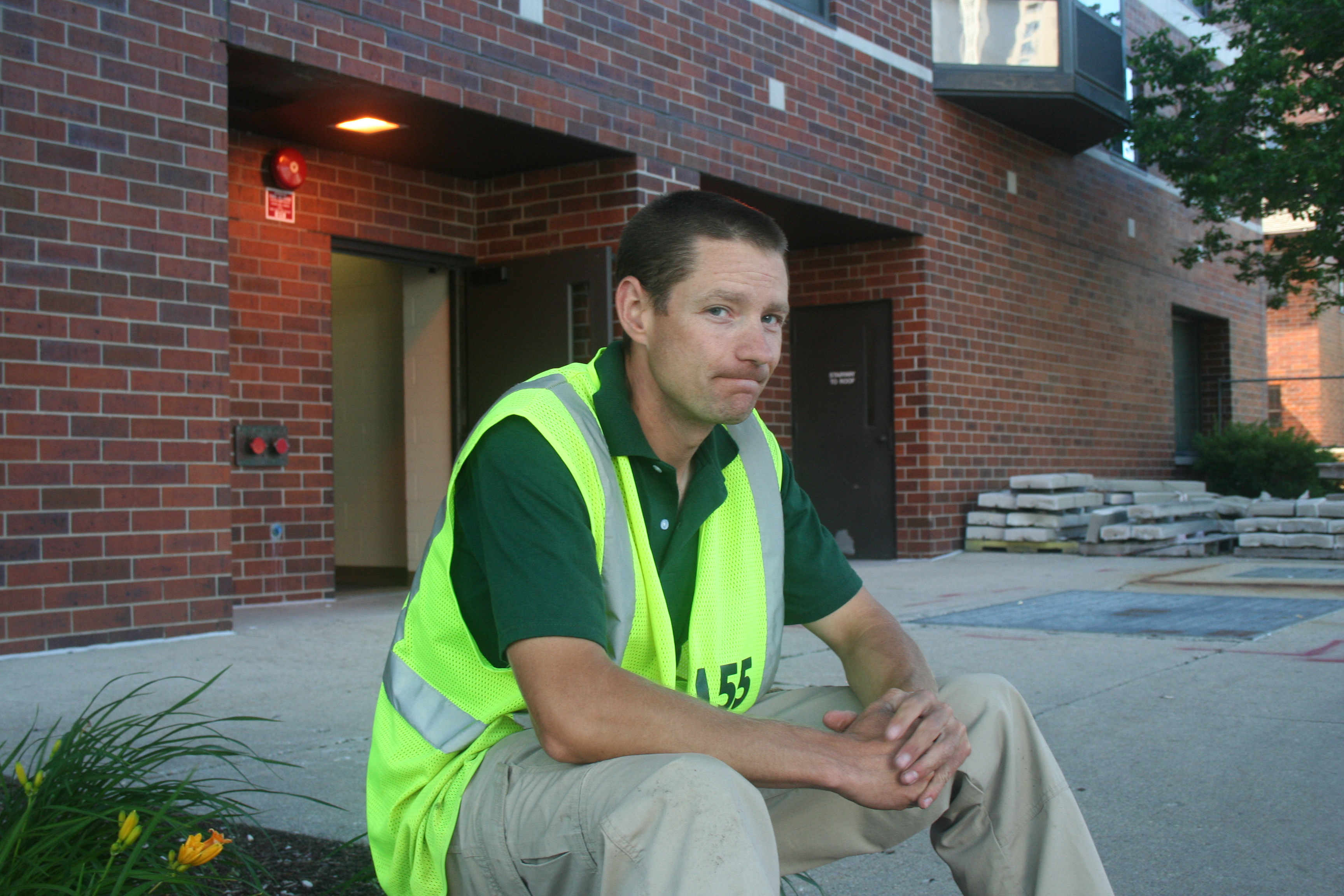 Bill Holland grew up on 58th and North Avenue near the State Fair Grounds.

Holland, who has two sisters and a brother, all younger, said the siblings, who are separated by distance, aren’t very close these days. “It’s just life, I guess…just monthly bills, you know, taking care of things and trying to make stuff happen,” he said.

Also a father, Holland has been divorced for seven years. Because of that and the nature of his work, Holland said he doesn’t get to see his 10-year-old daughter as much as he’d like. “It’s hard, it’s a challenge, it’s a real challenge. We both work – she’s a nanny, I do random construction for the past five years, now – so I work real weird hours, you know, I don’t have dedicated end times so it makes, ‘yeah, I’ll pick up Faith at 3:30,’ you know, ‘I’ll pick her up from school today,’ makes that a challenge. I can’t – you see I’m sitting here waiting for a ride.”

A month and a half ago Holland started with a Milwaukee-based landscaping company after four years working on sewer lining. He also “moonlights” as a reservist.

And, Holland’s aspirations as a child, though slightly different, weren’t that far off. “I looked up to the soldier for taking that stand for our country and doing the ‘right thing’ for the greater good; I looked up to the firefighter, I wanted to be a firefighter because, you know, they’re there to rescue people, they’re there to serve a very ‘good’ purpose and welder, I thought it was cool – playing with electricity and making things.”

So, from early on, Holland knew that “doing the right thing” was important to him. He said it’s been a major factor in his life. “I try to live by that every day; I think that it’s a compass – in every little action, then the big ones aren’t as much of a challenge. I’ve had the opportunity to leave town a couple times and I’ve chosen not to, you know, to stay close to my daughter.”

But, in terms of work, he’s still looking for a little more. “Right now, I’m just trying to get things on an even keel, just trying to understand and maneuver into a place where I’m not using a shovel, where I’m using my brain and can tap into some of the creativity that I’ve got. Maybe start making some money from that instead of my hands,” he said.

The truth, though, is Holland, who builds furniture in his free time, enjoys working with his hands. He admits the difference might be in who you’re working for. “I think that’s the key, right there. Having that freedom to be able to see something from start to finish, you know, and not pick up where somebody left off or not see what people are charging for my work and getting a, I wouldn’t say crumbs, but, like, getting a portion of that. I think that it’s out of hand, here, how much the CEOs and the COOs and all the executives make compared to the people that make the money for them – it’s a disease – so I want to change that.”

Did you find value in Bill’s story? If so, please subscribe to our newsletter; we publish the story of a different Milwaukeean every week.